Five Things to Know About Microgrids 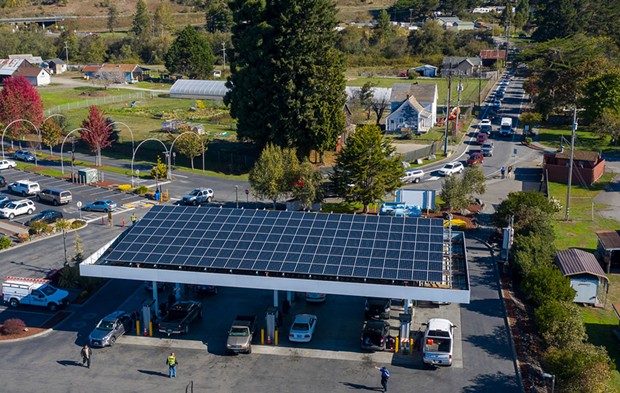 More than 1 million Californians were left in the dark for days recently as their big utility companies shut off power for fear of sparking wildfires. Frustrated by those outages, some homeowners say they’d like to turn their backs on the companies in favor of smaller providers who might do a better job of keeping the lights on. The mayors of San Francisco and San Jose say they want to sever ties with Pacific Gas and Electric, which serves much of Northern California, and create separate utilities for their cities.

Grasping for solutions, people toss around ideas like joining “microgrids” or setting up banks of generators to keep the electricity flowing during widespread power cutoffs. Would that really help?

What, exactly, is a microgrid?

A microgrid can be as simple as a single home operating on its own solar power, or a complex series of connections between a power source and distribution lines to end users. It can run a business, a neighborhood or even a city. It can be any size and may be fueled by renewable energy stored in batteries, or by generators run on a conventional fuel such as diesel.

Here’s Chris Marnay, a senior scientific fellow at Lawrence Berkeley National Laboratory, who wrote the definition of microgrid that is used by the U.S. Department of Energy: “There are two characteristics: It is a locally controlled system, and it can function either connected to the grid or as an electrical island.”

How many microgrids are in California?

It’s difficult to say how many have sprouted across the state and are now dotting the landscape, producing and sharing their own energy. Such systems include small neighborhood operations and one that runs the desert town of Borrego Springs.

That town, and others like it, are known as end-of-the-line communities, lying just beyond the reach of power companies’ distribution lines. For those small locales, and for residents in many rural parts of California, a microgrid is the only choice if they want power. Many state universities have training-wheels versions that use small solar arrays to power a building or a section of the campus. UC San Diego runs a much larger system that provides up to 90% of campus electricity.

If some California lawmakers have their way, there will be many more such systems. A bill in the Legislature would require utility companies to identify the best areas of the state for employing microgrids and then build them.

A 2018 law sets a deadline of Dec. 1, 2020, for creation of a program for how they might operate, especially during times of emergency. The state Public Utilities Commission, which regulates California’s power companies, the California Energy Commission and the Independent System Operator—which runs most of the state’s electrical grid—are developing the plan.

Not surprisingly, former Gov. Jerry Brown is an enthusiastic supporter of microgrids. He said in his 2015 inaugural address that they should be greatly expanded. His rural retirement compound, Rancho Venada, at the end of a dusty road in Colusa County, is powered by a microgrid system.

How can microgrids be used during emergencies, such as fires?

Natural disasters have a way of prying open windows of opportunity. But “California is a bit behind the curve,” Marnay said. “The fires are going to be our Superstorm Sandy. They are going to bring about change.”

Hurricane Sandy lashed the East Coast in 2012, leaving millions of customers in 21 states without power for days and weeks. The superstorm’s aftermath brought about policy changes in several states in the Northeast. Connecticut became the first in the country to create a statewide system of microgrids to provide emergency power.

Marnay and others noted that a microgrid research project kept operating after a magnitude 9.1 earthquake and tsunami devastated Japan in 2011 and knocked out power. The project, at a local university, performed well in the wake of the twin disasters, cementing the idea that independent power systems could maintain service in emergencies.

“It was a complete wake-up call,” Marnay said. “It woke up policymakers. The genie got out of the bottle, and (it) wasn’t just energy nerds such as myself interested in microgrids.”

In the last few years, “resilience” has become the watchword for the advantages of microgrids as a backstop when disasters obliterate the larger grid’s ability to distribute power. During the 2017 fires in Sonoma County, Stone Edge Farm drew electricity from its microgrids for 10 days while utility power was down.

State officials hope that eventually, electricity generated by microgrids can keep critical services operating in emergencies: hospitals, communications systems, community centers, etc. One city that has already adopted this approach is Fremont: It has outfitted three fire stations with their own power supplies.

What about other backup options, besides microgrids?

Many homeowners and small businesses use their own generators, powered by diesel fuel, natural gas or propane, during outages. They work well but carry some limitations. Diesel motors can be loud, for example, and cannot be operated indoors because of dangerous fumes. In addition, the fuel for the generators must be stored nearby, and it’s highly flammable.

Many residential solar systems now include storage, offering homeowners a way to avoid generators if they wish. With the rapid improvement of batteries to store energy from rooftop panels, companies are selling such packages for residential use.

During a blackout, these systems can allow homeowners to flip a switch and use their own stored power to keep their lights on. If used sparingly, running only critical appliances and devices, such storage systems can provide five to 10 hours of power, depending on the size of the setup. The batteries can replenish themselves during the day, so the homeowners may be protected even in a prolonged outage.

The systems are popular, as are solar-powered generators, all being heavily marketed as fires burn across the state. One company’s model is called The Californian.

Churchill noted that these systems can be critical for people dependent on electricity to operate at-home medical equipment. “For some it’s a convenience,” she said. “For others, it can save lives.”

What if we all ditched the big utilities and went our own way?

A poke in the eye to big companies and their power cutoffs may provide momentary satisfaction and give customers a sense of control. But it’s not going to solve the blackout problem.

The vast majority of us are connected to the grid and to the big utilities that have spent 100 years building it.

The rise of small, locally run utilities, known as community choice, provides an alternative to big, for-profit utilities. In most cases, these entities use power that comes from clean energy. Scores of small towns and counties have gone this route and now operate their own mini-utilities. These suppliers reported 2.5 million customer accounts at the end of 2018.

Example: When Pacific Gas and Electric recently shut off power to some residents in Sonoma County for fear its equipment could start a fire, Sonoma Clean Power — a community choice utility — was unable to provide power. Its customers have been in the dark along with everyone else. No backstop there.

At least one community utility, Peninsula Clean Energy, which serves 290,000 homes and businesses in San Mateo County, recently announced a $10 million investment in emergency backup power systems that would keep electricity flowing to its customers even when PG&E’s customers are in the dark.

“Peninsula Clean Energy is concerned about residents for whom power shutoffs could be life-threatening, for example, those who rely on respirators,” company CEO Jan Pepper said by email. “The idea is to keep them in their homes where they are comfortable, with clean battery backup that can keep their essential medical equipment functioning.”