Dramatic Video Shows How Sneaky Sneaker Waves Can Be

January 13, 2020
4 comments
The destructive power of sneaker waves was on full display this past weekend, with a near miss at Moonstone Beach in Trinidad and a heartbreaking tragedy in Oregon, where two children — one of whom died while the other is missing — were swept off of a beach with their father, who survived. 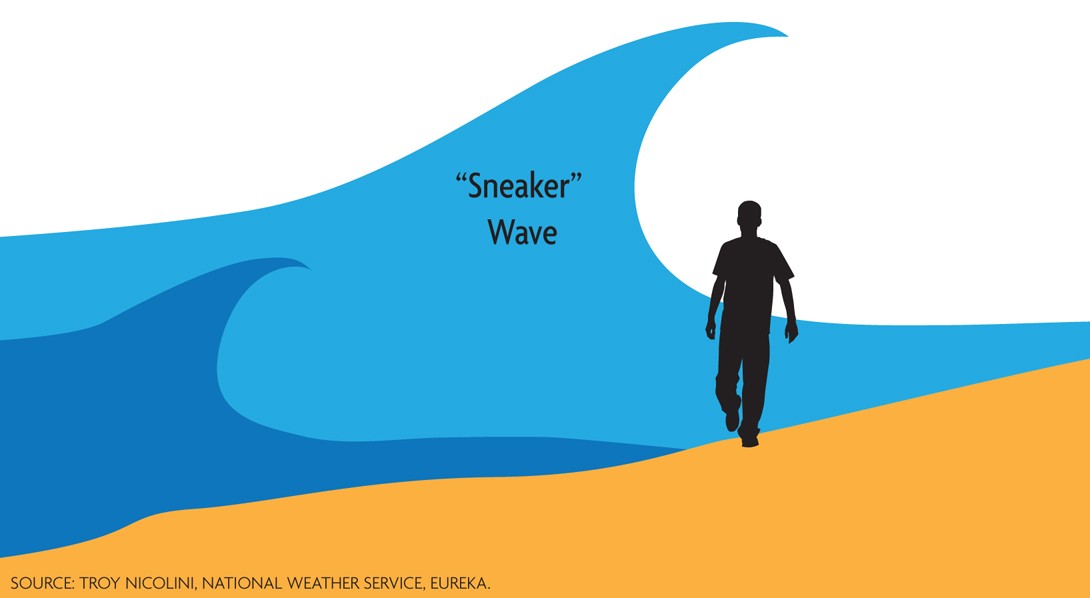 The Humboldt County coast is notoriously dangerous. Some beaches — those that are flat and have easy access to higher ground — are less dangerous but the cold water at each makes survival difficult for anyone carried out by the surf.

Many lives have been claimed over the years along with countless near misses, like the one Marcella Ogata-Day caught on camera in Trinidad while checking out the King Tides, which was posted on the Redwood Coast Tsunami Work Group Facebook page.


Noting she was in no way judging others, Ogata-Day says she wanted to help “illustrate the power of the water” that suddenly overtook some beachgoers watching the high surf on Jan. 11, all of whom were able to make it out safely.

“There is a perceived sense of being safe and there were plenty of times when the waves came up, then went back as expected,” she wrote. “But waves can double up with a strong surge coming to shore, which happened yesterday and knocked some people not even on the sandy part of the beach off their feet with water coming up to the parking area. Everyone was okay and a lot more alert."

Last March, a Bay Area man on vacation with his wife and children died on his birthday after being swept away by a sneaker wave north of Luffenholtz Beach near Trinidad.

In October of 2018, Humboldt State University student Key’Maan Stringer — an aspiring actor known for his bright smile — is presumed to have drowned after being swept off the North Jetty on Oct. 29 while trying to free a fishing line that had become entangled in the rocks. His body has never been found.

And, there was also the 2012 tragedy of a family caught in heavy surf while taking a walk at Big Lagoon Beach. Gregory "Geddie" Kuljian, who has also never been found, his father Howard Kuljian and his mother Mary Elena Scott, died that day.

The Redwood Coast Tsunami Work Group notes the Moonstone Beach video that is “an excellent illustration of how sneaky these waves can be.”

“It looks like a normal surge but the water keeps coming in and coming in and suddenly the people are engulfed,” the post states. "Always be alert that surges can suddenly be two or three times as large as what you have been observing. Keep children well away from the surf's edge. If your dog is pulled in, don't go after them. They are much more likely to make it out on your own than you are.”