January 13, 2020
comment
Dozens of people gathered in the rain at the Arcata Marsh on Saturday, Jan. 11, to view the highest tide of the year and listen to a discussion on how it can be seen as a preview of sea level rise and the effects it will have on both the city of Arcata and the world.

Elliott Dabill, a retired high school biology teacher and current president of the board of directors for Friends of the Arcata Marsh, which sponsored the event, led a walk along the dikes and pathways through the marsh, explaining the science behind the King Tide event. The tour also incidentally treated followers to glimpses of black-crowned night herons and dramatic aerial ballets by flocks of dunlins in flight. 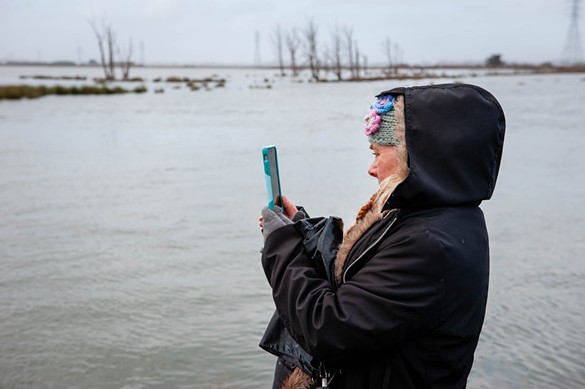 King tides, Dabill explained, occur when the Earth is between the sun and the moon, and at the closest point in its orbit to both these bodies. This combination of events occurs once or twice a year, usually in January, resulting in a dramatically high water levels along the ocean shores. (This year, there will be another King Tide in February.) While ordinary high tides generally run around 6 feet, king tides are more than 8 feet high. In Arcata Bay, the tide peaked at 8.35 feet shortly after noon Saturday, covering the mud flats and salt marshes, leaving dead trees, bushes and small patches of grasses protruding eerily from the water.

In the 1850s, white settlers, in an attempt to reclaim upland areas from the reach of the tides, diked off the bay from the land, replacing the salt marshes that originally rimmed the water with levees. This worked for about 150 years but now that the ocean is rising because of global warming, high tides are getting higher, and eventually the height of today’s king tides will become the new normal, occurring on a frequent basis. At that point, when an unusual event, such as a big storm or the regular astronomical pattern that creates King Tides occurs, the water levels will be so high they will overtop the dikes, creating flooding and making some areas useless for agriculture and dwelling.

“When the sea level rises 2 to 3 feet, it’s going to start overtopping these dikes and then the Humboldt Bay will increase by one-third,” Dabill said. “The bad news is that your house is in that one-third.”


[jump] “No it’s not,” retorted a walker who lives in a remote area of Fieldbrook.

“Some of your houses,” Dabill corrected himself.

“Look at what we have today and imagine it getting worse,” he continued.

“The green zone,” he said, referring to a city map, as the group stood at the edge of the McDaniel Slough levee near the marsh’s western edge, “is where we’re standing right now. This green zone is going to be under water.” 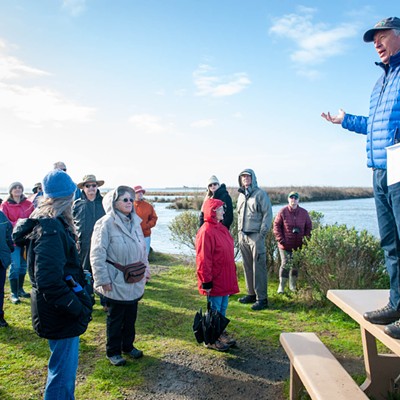 King Tide at the Arcata Marsh
By Mark McKenna
Click to View 7 slides
The most popular parts of the marsh, where people run, walk dogs, bike, and watch birds, will be under water, as will some of the ponds, he said. One part of the marsh that will remain above water, according to the inundation map, is the former dump site called Mount Trashmore.

“Future people rowing past what used to be Arcata will say, ‘What’s that high ground over there?‘ he said. “‘It used to be the city dump.’”

“What does Arcata want to do about this?”

One thing the city intends to do is save the wastewater treatment plant, which is currently undergoing a major upgrade. It would not be cost-effective to build a new facility somewhere else but, in order to do this, the city will also have to protect South G Street from rising waters, which should be a major relief to property owners there.

“How would you protect a big chunk of land like that?” Dabill asked. “More dikes. If you walk the trail around Klopp Lake, that big lake out there where the parking lot is, and look back at the wastewater treatment plant, you’ll notice that the slope protecting it from the bay is covered in large rocks. And the top of that dike is really wide. The city has planned for the future to be able to build it up even more and armor it and grow plants there. It’s called a living slope, where they angle the earth and grow plants that will protect it from tidal washing.”

The purpose of the Arcata Marsh, Dabill explained, is to provide sewage treatment for the city, using natural processes instead of chemicals. In a nutshell, when wastewater flows underneath the root systems of water-loving plants, bacteria on the roots feed on the nitrogen-rich wastes and, by the time the water has spent several weeks flowing through a series of ponds, it is clean enough to be discharged into the ocean. (The wastewater is disinfected with chlorine before its final dispersal.)

After the upgrade, the chlorine will be replaced by an ultra-violet light disinfection system. The treatment ponds on the south side of the marsh, an area where the public does not usually go, will be protected from the rising bay.

The Arcata Marsh was the first in the world to use this innovative but natural system and, since it was built, thousands of similar marsh sewage treatment systems have been built throughout the world. It is especially valuable to poor countries, Dabill said, which may not be able to afford a high-tech system but can construct or modify a marsh.

But the focus of the day was the tide.

“What you’re seeing today as a King Tide is tomorrow’s normal tide,” Dabill said. “The sea level is rising and the reason that the sea level is rising is because glaciers are melting around the world and the ocean temperature is changing [and warm water takes up more space than cold water]. The loss of glaciers means that hundreds of millions of people, especially in Asia, are going to have to move because they will either have no water or not enough.

“If global warming reaches 1.5 to 2 degrees Celsius, then the bad stuff happens. The permafrost melts releasing methane [an even more powerful greenhouse gas] and more CO2, so a tipping point is reached.”

“You don’t have to feel guilty about flying in an airplane but you do have to think about it,” he said. “I’m refinancing my house to put on solar panels. We have to do everything we can and get governments involved.

“This may be the biggest catastrophe that’s ever hit humanity.”

Dabill urged photographers in the group to send their pictures to http://california.kingtides.net/, a website run by the Coastal Commission. The city of Arcata is also collecting photos for use on its own website, which is at https://www.cityofarcata.org/759/Sea-Level-Rise.