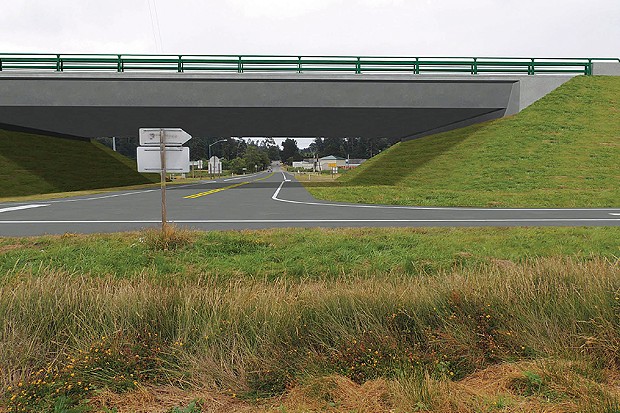 Even on an already notorious section of road, the Indianola Cutoff on U.S. Highway 101 stands out as a dangerous crossing point, with a collision rate 200 percent higher the state averages.

Anyone who has lived in Humboldt County long enough likely knows the story of the safety corridor, with the short version being that a succession of horrific accidents led to the special designation in 2002.

In the five years prior, there had been 85 accidents along the 5-mile stretch between Eureka and Arcata, including five fatal crashes, with the vast majority — 83 percent — occurring at one of roadway’s intersection, according to a Caltrans report.

Interim measures to reduce the collision rate were implemented — including a headlights-on requirement and lowering the speed limit from 60 mph to the current 50 mph.

Still, accidents continue to occur on the short span, the most heavily traveled of any highway in Caltrans District 1, which includes the counties of Del Norte, Lake and Mendocino.

On Jan. 14, William Clymer was killed while attempting to turn onto the Indianola Cutoff from the southbound lanes of U.S. Highway 101. His GMC Jimmy was hit on the passenger side by a vehicle traveling northbound and overturned. He was 42.

According to CHP Officer Paul Craft, Clymer’s death marks the first fatal car crash along the stretch in at least five years, although there have been countless accidents and close calls.

A month earlier, another car overturned at the same intersection, sending at least one person to the hospital.


In an email, Craft notes that the high traffic volume — especially during the morning and evening commutes — means it “can be difficult, during those times, to safely enter and cross traffic.

“Use caution and be patient when turning on the highway from any side road and observe the 50 mph speed limit to reduce your chances of being involved in a collision,” he continued.

The safety corridor measures, however, were always meant to be short-term, with a report on the roadway’s improvement project noting that the seven crossing points need to be addressed.

After nearly two decades of planning, construction is slated to begin this year, with Caltrans receiving the go-ahead from a panel of somewhat dubious California Coastal commissioners, who made clear they believed the agency’s plans are blind to the looming threat of sea level rise, which could render the improvements moot.

"This is ground zero," commission Chair Dayna Bochco said during the Aug. 7 meeting in Eureka. "We don't have a lot of time right here. The traffic is a terrible problem. The water is going to be a worse one."

The modified version of the project that received the commission’s OK includes requirements that Caltrans report high water levels on an annual basis and dikes or armoring are not to be used as a primary defense against sea level rise.
Caltrans expects to keep the freeway open during construction, which is slated for completion in 2026, except for two brief night-time closures, when southbound traffic will be re-routed on Samoa Boulevard.

According to Caltrans spokesperson Myles Cochrane, the improvements are split into five separate projects that include “an undercrossing at Indianola Cutoff, a half-signal at Airport Road, acceleration and deceleration lane improvements, cable median barrier installation, bridge and rail replacements, and tide gate replacements.”

He said in an email that contracts for the acceleration and deceleration lane improvements, the cable median barrier project and the Jacoby Creek and Gannon Slough bridges project have been awarded, with work set to start in late spring or early summer.

The replacement of tide gates to protect the roadway is currently in the final design phase, but the goal is to begin construction late in the summer, according to Cochrane.

The biggest changes, including an undercrossing at the Indianola Cutoff, the half-signal and closing off the crossing points — is still another year out, he said.

When that is complete, there will be no left turns across highway — in either direction — with the exception of the Airport Road light.