January 29, 2020
comment
In the aftermath of the Board of Supervisors voting down the Terra-Gen wind project amid dire global climate forecasts, many have been asking what Humboldt County can do to reduce greenhouse gas emissions and slow climate change.

Well, local governments are working on it and residents have lots of ideas.

The state is requiring every city or county to address the climate change impacts of projects that it approves. Local governments have the choice of doing this on a project-by-project basis or by creating a Climate Action Plan for the whole community that would enumerate the quantity of greenhouse gases being emitted and come up with plans to reduce that amount.

Humboldt County, in cooperation with its seven incorporated cities, is slowly hammering out a Climate Action Plan, complete with goals, policies and specific changes that could be made. Several workshops on the topic have already been held and some cities have created their own plans.

Most recently, a Jan. 15 workshop at the Wharfinger Building was jointly sponsored by the county Planning and Building Department and the city of Eureka. About 50 members of the public gathered to hear county planner Connor McGuigan describe what the local community can actually do in the next 10 years to meet or exceed state requirements for greenhouse gas reduction.

Several professional energy experts were on hand to answer questions.

The biggest cause of greenhouse gas emissions in Humboldt is transportation. Livestock comes in second, with stationary heating — natural gas, propane or wood — coming in third.

Humboldt, McGuigan said, could meet or exceed state requirements for greenhouse gas reduction if the following steps were taken by 2030:

• Install 526 public charging stations for electric vehicles. This assumes that by 2030, 10 percent of light-duty vehicles in the county will be electric.

• Install four hydrogen fueling stations. Hydrogen, which creates electricity through an onboard fuel cell, is a desirable fuel for large trucks, explained Schatz Energy Research Center senior research engineer Jerome Carman, because the trucks can re-fuel in a few minutes as compared to several hours for a conventional electric vehicle. (The hydrogen is forced through a fuel cell, which creates electricity that runs the motor.).

• Require all diesel fuel sold in Humboldt to contain a 20-percent renewable diesel mix. McGuigan explained that renewable diesel, which is made from the chemical re-processing of vegetable oils and animal fats, is not the same as biodiesel and can be used in conventional diesel engines. The Northern Humboldt Unified School District, which provides transportation for many Humboldt schools, has committed to fuel their school buses with this mix.

• Require owners of new apartment buildings to give a free bus pass to each of their tenants. McGuigan estimated that this would result in 1,000 free bus passes by 2030.

• Require all businesses that employ more than 25 people to give a free bus pass to each employee. An estimated 21,000 Humboldt residents would benefit.

Doing all of the above, McGuigan said, would just meet state emission reduction goals. After he finished talking, people circulated the room and wrote their ideas on posters papering the walls. 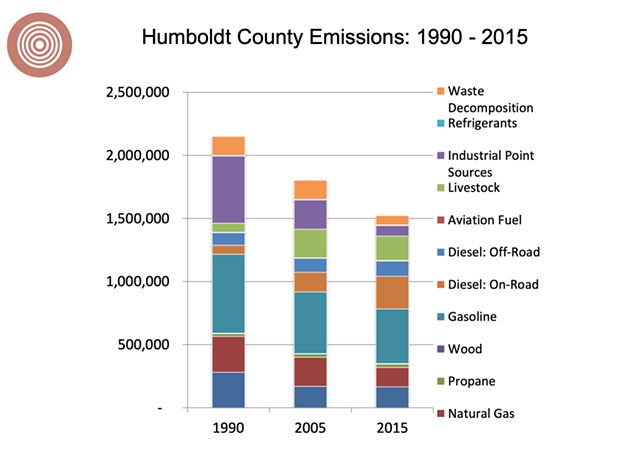 A 55-mile an hour speed limit would save fuel, several people pointed out.

Planting more trees, both for carbon sequestration and to provide summer shade, was also suggested. Bike parking at all new multi-family and commercial developments would be helpful. Banning single-use plastic and Styrofoam packaging was another idea. Several people reminded everyone that nothing could be changed until we become willing to simplify our lifestyles and, of course, reduce, re-use and re-purpose what we think of as waste.

McGuigan said he was trained to think only big government can find solutions to the climate crisis, but he now realizes that local governments — with their ability to make sensible land-use planning decisions, create and enforce good building codes, deal responsibly with waste, manage utilities and purchase renewable power — are an important part of the global effort.

More Climate Action Plan workshops are slated to take place this year, though dates have not yet been set.