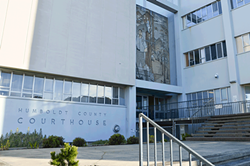 A Eureka man faces up to 40 years to life in prison after a jury found him guilty of second-degree murder today for the August 2017 shooting death of his decades-long friend.

According to a Humboldt County District Attorney’s Office press release, David Kobak was convicted at the conclusion of a three-week trial, which included testimony that Frederick Loftus, 58, was hit eight times, with six of the gunshot wounds potentially fatal on their own.

Kobak, who was 75 at the time, called 911 after the shooting, according to officials, and told investigators that he and his friend of 30 years had been in a fight when he went to grab his rifle and fired.

He is scheduled to be sentenced Feb. 20.

Read the full press release from DA’s Office copied below:


Today a Humboldt-County jury found David Kobak, age 75  (at the time of the shooting) of Eureka, guilty of second degree murder for the killing of 58-year-old Frederick Loftus. The jury also concluded that he used a firearm to commit the murder.

Kobak killed Mr. Loftus on Aug. 25, 2017. The victim had been staying as a house guest with Kobak; the two men had been friends for over 30 years. At about 6 pm, the Eureka Police Department (EPD) received a 911 call from Kobak stating that he had just shot his friend. At trial, Dr. Mark Super testified that the victim died as a result of 8 gunshot wounds, 6 of which could have been fatal on their own. Kobak told EPD Detective Ron Harpham that the two men had gotten into an argument. According to Kobak, Loftus hit him 2 or 3 times in the face. Kobak stated he was not injured, but then Mr. Loftus said something that made him angry. Kobak described that as a result of this anger, he went to his bedroom, grabbed his fully loaded rifle, and came back out to find Mr. Loftus sitting in the kitchen. As Mr. Loftus stood up, Kobak then fired his rifle ten times, killing him.

The District Attorney’s Office appreciates the time and effort of the jurors in this case.

Mr. Kobak will be sentenced on Feb. 28, 2020. Second degree murder carries a sentence of 15 years to life (meaning he would become eligible for a parole hearing after 15 years). Incorporating the jury’s finding that he used a firearm could increase that sentence to as much as 40 years to life.