February 14, 2020
comment
As one of the most photographed Victorian buildings in California, if not the United States, the Carson Mansion has crept beyond Humboldt’s borders to seep into our popular culture. Certainly it has added its unique presence to the horror genre; I’ve periodically encountered the mansion’s distinctive form as the architectural basis of haunted houses in scary posters or other artwork from well outside the local area.

Photographing such a popular subject is usually low on my list, but I live nearby, and the building is so visually compelling that occasionally a night will find me down there with my camera to add another local’s vision to the lexicon of the old Victorian. With the prospect of February’s Snow Moon rising behind the mansion, the opportunity to capture the spooky house under a full moon proved irresistible. 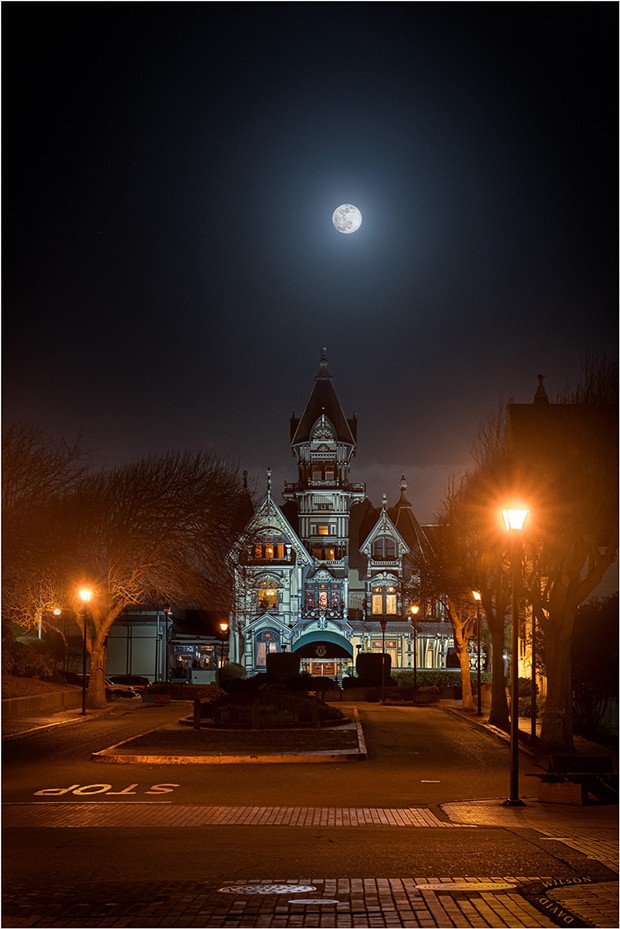 I scouted the scene the afternoon before photographing it to estimate where the moon would be that night, where I would have to position myself and which lens to bring. I was there not five minutes but in that short time two cars and one passerby stopped to take pictures of the place from outside the fence. The great pile is on private property and can only be enjoyed from afar.

Built in the 1880’s, the Carson Mansion has stood for more than 130 years as a beacon of American Victorian architecture. For more on the fascinating history of the Carson Mansion, a Wikipedia article is complete with 16 references for the information, including Library of Congress, historical bodies and articles from the North Coast Journal.

Have you ever wondered how photographers get a gigantic moon to dwarf something on the horizon like a house or a tree, aside from compositing images together? The trick is to find a subject on the horizon where the sun or moon will be and then back up so far from the subject that it will be tiny — just as small as the sun or moon appears. At that point, you need the magnification of a very powerful telephoto lens to bring your scene up close, giving you a photo of your subject accompanied by the giant orb of sun or moon. In my image the moon isn’t nearly so large because I wasn’t able to get far enough away from the mansion to make the building appear nearly moon-size. And if I had been able to, I wouldn’t have had a lens powerful enough to bring it all in!

No doubt “Snow Moon” is a moniker slapped onto the February full moon by folks in colder climes; it’s unlikely tropical folks think of it so — maybe a Mosquito Moon? Names such as “Wolf Moon,” “Snow Moon,” “Blood Moon” and others do lend some good drama to an evening, though. But many of the names are seasonal and dependent on the hemisphere or the region in which one lives; ask your friends in Borneo whether they saw the Snow Moon. I prefer the generic, yet descriptive, “full moon,” for everyone knows what it is with no questions asked.