Should Stores be Required to Accept Cash? 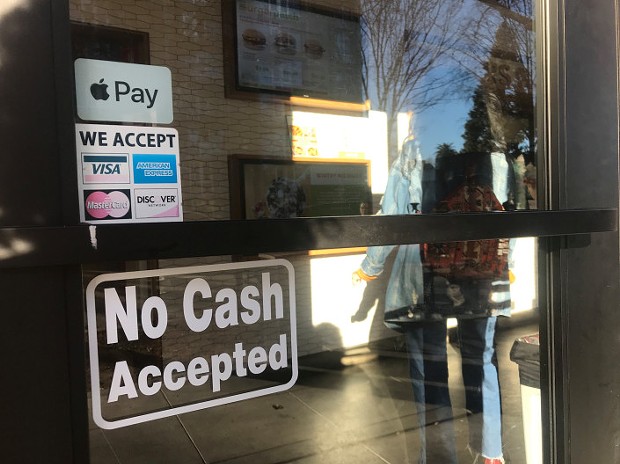 A small, but growing number of businesses are no longer accepting cash. Owners say that accepting only credit cards, debit cards or digital wallets like Apple Pay is more efficient and lowers the risk of being robbed. Electronic forms of payments are gaining popularity with consumers.

But the cash-free trend has raised concerns that such shops exclude customers who rely exclusively on cash. Sen. Jerry Hill, a Democrat from San Mateo, says this amounts to discrimination against people without credit cards or bank accounts, who tend to be low-income.

“I don’t think it’s intentionally discrimination. But that’s in fact what they’re doing,” Hill said. Cashless stores “may be the thing of the future, (but) it’s not there yet.”

That’s why Hill introduced a bill last week to require that all brick-and-mortar businesses in California accept cash.

If passed, California would become the third state, after Massachusetts and New Jersey, to ban cashless businesses before they become widespread. San Francisco, Philadelphia and New York City passed similar ordinances in the past year, and Washington, D.C., is currently considering a ban.

California residents with limited resources are far more likely to use cash. While 7.4 percent of California households do not have banks, the rate among households earning less than $15,000 per year is 27.3 percent, according to a 2017 survey by the Federal Deposit Insurance Corporation.

People of color, immigrants and disabled people are also more likely to be excluded by a cashless economy. In California, 20.5 percent of black households and 14.5 percent of Hispanic households do not use banks, according to the survey data. The rate is 24.8 percent among households that speak only Spanish at home and 20.7 percent among adults with disabilities. Single mothers lack access to bank accounts at a rate more than twice that of single fathers.

“When retailers don’t accept cash, they’re effectively locking out workers in low-wage jobs, communities of color and our homeless neighbors,” Andrea Zinder, president of United Food and Commercial Workers Western States Council, which has endorsed the bill, said in a statement.


People between the ages of 25 and 44 pay with cash less often than people who are older or younger — about one-fifth of the time, compared with one-third, according to a 2019 study by the Federal Reserve Bank of San Francisco.

Under the proposed law, cashless transactions would be legal, but if a business turns away a customer who only has cash, it could face a civil penalty between $25 and $500. Online retailers would be excluded, as would car rental businesses.

No groups have filed opposition against the bill yet, but Hill expects that retailers may put up a fight. Around 10 percent of the nearly 100,000 businesses that use Square, a financial check-out service, are cashless, according to a recent national study from the company.

California Retailers Association has not yet taken a position on the bill, said President and CEO Rachel Michelin. An uptick in retail theft has spurred some smaller retailers to turn towards electronic payments to avoid keeping cash behind the counter. She said the bill might be “premature” given that she hasn’t observed a widespread trend in stores going cashless, other than in more techy areas like Silicon Valley.

“I saw there’s a sign there that said ‘we don’t accept cash.’ That kind of shocked me and surprised me,” Hill said. “That seemed almost like they were discriminating against those who did not have the ability to pay an electronic transaction, and for me that raised a flag.”

The store was Sweetgreen, a build-your-own salad eatery with a sleek tech aesthetic, where a typical bowl costs upwards of $10. The chain phased out cash transactions in 2017 but reversed course last year.

“Going cashless … had the unintended consequence of excluding those who prefer to pay or can only pay with cash,” the company explained in a blog post last April. “To accomplish our mission, everyone in the community needs to have access to real food.”

To Hill, that’s evidence that companies can transition back “without great difficulty.”

“I don’t know if (this bill) is as big of a deal for (retailers) as those who are now discriminated against because they cannot pay with cash,” Hill said.

Jackie Botts is a reporter at CalMatters. This article is part of The California Divide, a collaboration among newsrooms examining income inequity and economic survival in California.