Gradually, particle by particle, it grew in size. Through the eons its body filled out, increasing mass infinitesimally with each random mote and flake that settled onto its surface.

In its youth it had prowled the blackness of space on the shadowy fringes of a huge vortex. With others of its kind, it had drifted lazily at a safe distance from the swirling chaos of the maelstrom, observing aloofly the orbits and eddies of ices, metals, rocks and gases in their mad circuits about the new, bright little star at the center.

Masses moving in the unceasing night caressed it with soft tendrils of gravity, tugging and pulling at it gently, continually altering its wanderings until at last it was coaxed into a lazy path downward toward the star at the center of the busy swirl. Eventually, the sun’s own gravitational influence embraced it tenderly and drew it in.

Perhaps never again would it know the relative peace of its birthplace. It had begun a new orbit, a new cycle that would plunge it inward through the busy minefield of giant planets and debris, toward the sun, around it, and back outward again. Over and over again it would repeat this cyclical, 17,000-year-long trek down to the star and back out. During this endless journey, it would be subjected not only to the tortures of the sun’s searing radiation at its closest approach, but to the immense gravitational pulls of the moving planets and the star about which they orbited. Its path would be influenced by the gravity of every body it passed.

Now the comet plunged toward the sun again, the star’s radiation bombarding its crust and boiling away the softer areas across its revolving surface. Pockets of volatile gases burst forth continually under the bombardment, sending streamers and jets outward until the comet’s nucleus was immersed in a fuzzy cloud of its own sloughed materials. Its course was altered ever so slightly with each jet erupting from its surface, with each chunk blasted free. Its long tail took shape as it swung down closer to the sun, the solar wind pushing dust and gas particles away from it and outward from the sun in a long glowing trail.

It passed close to the third planet, closer than it ever had before. It was no stranger to this part of the neighborhood, for the comet had passed that big blue marble many times since it was first dislodged from its old home outside the solar system. The last time it had swung by Earth some 17,000 years before, humanity had comprised a scant few millions of souls. The peopling of the Americas had only recently begun with early migrations from Asia. People had set down their stone tools and gazed in wonder with their naked eyes, or perhaps hid in fear. 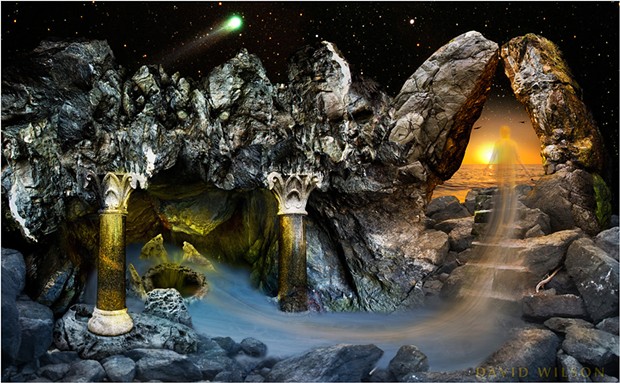 Now, as Comet Hyakutake approached our planet again, Earth’s billions of inhabitants trained on it the latest technological instruments and lenses that the science of the late 20th century had to offer. Yet, advanced as we thought ourselves to be, this spectacular comet had come out of nowhere. We had failed to even notice it until it was fewer than three months from its peak visibility; it was discovered in January of 1996, and peaked by late March. And none of us will ever see that comet again.

I’m ready for another good comet.

Note: I’m not a scientist, and where informed scientific theory failed me — or rather where I failed science — I substituted with good old-fashioned creative license. We can call it science fiction. I hope you enjoyed the ride.