UPDATE: Bohn Cruises, Fennell Faces a Possible Runoff and Everything Else You Need to Know from Election Night

March 04, 2020
comment
Humboldt County voters heavily supported a pair of incumbent Humboldt County supervisors on Election Day, while leaving a property tax assessment to fund one of the area’s largest fire departments hanging in the balance.

In the First District, Supervisor Rex Bohn, a two-term incumbent who has held his seat since taking over in 2012 for the retiring Jimmy Smith, easily dispatched radio personality Cliff Berkowitz. Bohn, who jumped out to a commanding early lead and never looked back, took 65 percent of the vote to Berkowitz’s 35 percent to win another four-year term.

Berkowitz conceded the race this morning, thanking his supporters and offering congratulations to his opponent while stating he “ran a good campaign” and the incumbent “began espousing many of the ideas I have supported” as the election neared.

“I hope that he will uphold his reputation for follow through by continuing to support these ideas,” Berkowitz wrote in the concession statement. “The people who voted for me will hold him accountable for being a supervisor for all of us.” Read the full statement at the end of the story.

In the Second District, two-term incumbent Estelle Fennell dominated a colorful batch of challengers but may face a November runoff in order to retain the seat she’s held since her election in 2012. In the final Election Night tally, Fennell took 49.92 percent of the vote and held a 1,081 vote lead over her closest runner up, Southern Humboldt rancher and business owner Michelle Bushnell, who finished with 29.93 percent of the vote. With an unknown number of ballots left to be counted in the race, this leaves Fennell tantalizingly close to the 50-percent threshold she would need to eclipse to avoid a runoff with Bushnell in November.

Meanwhile, Michael McKaskle, a Redway man who’s served on a variety of community boards, finished third in the race with 11.3 percent of the vote, followed by retired Hydesville Water District Director Rick French with 4.47 percent and Redway operations consultant Sean DeVries with 4.38 percent.

Up in the Arcata Fire District, which stretches from Bayside through McKinleyville and west to the Samoa Peninsula, voters appear to have narrowly voted down a special property tax estimated to bring an additional $2.2 million to the district, which officials say would allow it to maintain current staffing levels and rebuild depleted reserve funds. Measure R — which proponents said was crucial to avoid the closure of a fire station and the elimination of six firefighter positions — needed two-thirds of the vote to pass and appears to have fallen short, with 60.08 percent of district voters supporting it, though the race remains too close to call.

Local school bond measures, meanwhile, had a mixed day. Funding efforts in the Cuddeback Union School District were decisively voted down, while one for the Bridgeville Elementary School District appeared to pass narrowly. Another that would raise $18 million for facility repairs and upgrades at Eureka City Schools was too close to call. 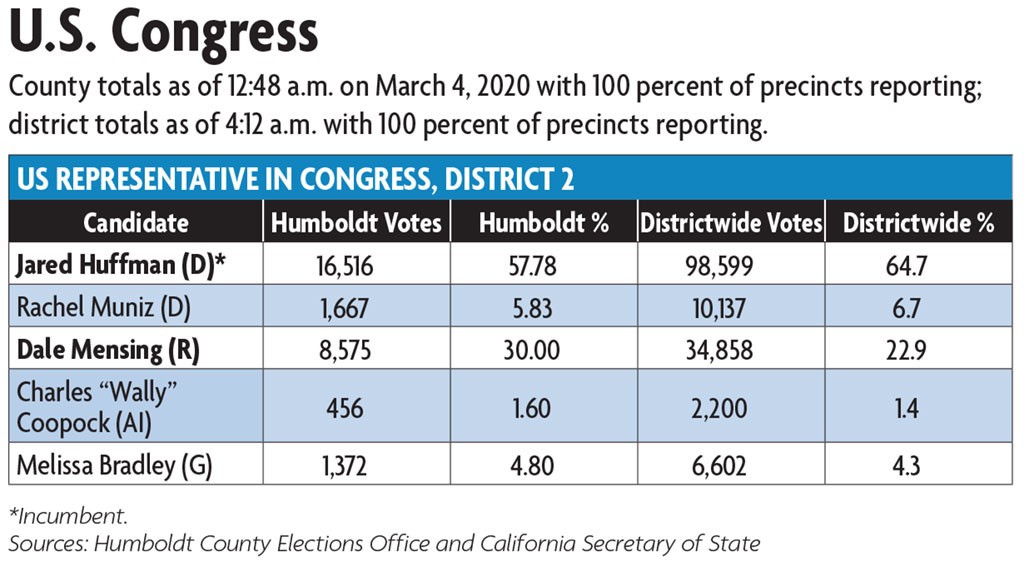 On the national level, incumbent North Coast Representative Jared Huffman (D) took a commanding 65 percent of the vote in his Second Congressional District and will square off against Republican challenger Dale Mensing, who tallied 23 percent, in November. Humboldt County also joined a host of counties spread through 14 Super Tuesday states in casting presidential primary ballots, with all eyes on the race for the Democratic nomination to see who will take on President Donald Trump in November.

Humboldt County Democrats overwhelmingly preferred Bernie Sanders, giving him 48 percent of the vote, followed by Joe Biden, who took 17 percent, Elizabeth Warren with 15 percent and Mike Bloomberg with 6 percent. Statewide, Sanders took about 33 percent of the final Election Day tally, followed by Biden with 24 percent, Bloomberg with 15 percent and Warren with 12 percent (with 93 percent of California precincts reporting).

Based on the preliminary returns, it also looks like Humboldt County had a relatively large turnout in the primary, with 29,585 residents casting ballots thus far, or 980 more than at this point in the last presidential primary in 2016.

I would like to like to thank all the people who voted; participation in the process is at the heart of our democracy. Thank you to all my volunteers and supporters for their hours of tireless work. I would like to particularly acknowledge the hard work and support from Claire Josefine, my campaign organizer, my family, and my wife Amy. So many people worked diligently to get our message out there, and in this arena, we succeeded. Issues that are now at the forefront of public discourse are there because of the work we all did. Thank you to everyone who wrote letters, walked door to door, made phone calls, put up signs, and supported me in myriad other ways.

Congratulations to Rex. He ran a good campaign. As the election neared, he began espousing many of the ideas I have supported. I encourage him to stick with them. He has embraced the idea of a Tribal Liaison, expanding Housing First county wide, begun talking about addressing the climate crisis with shovel-ready plans, and more. I hope that he will uphold his reputation for follow through by continuing to support these ideas. The people who voted for me will hold him accountable for being a supervisor for all of us.