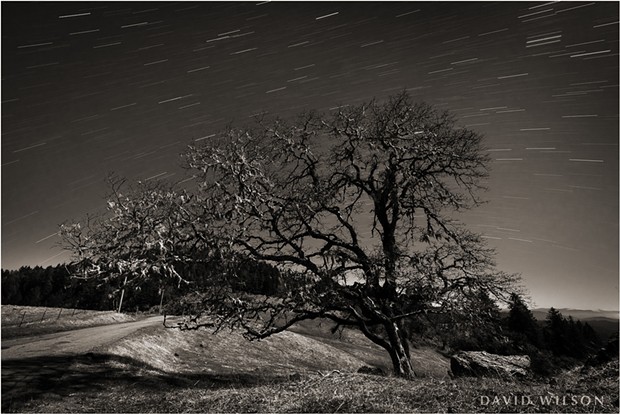 In the still of the night, on a ridge top beside a quiet country road, an old oak tree enjoys a long view of valleys and sky. What changes it must have seen as the years turned and the seasons slipped by, day by day and night by night.

Most of us will see the sun cross the sky throughout nearly every day. We know that the stars will also cross at night, but not many of us note their passage through the dark from dusk to dawn. How many nights has the old oak watched as the stars made their slow traverse across the sky? It has seen all the patterns made as the sun, moon, planets and stars rise and set.

Where we are in the northern hemisphere, we have a view of the northern polar axis, which conveniently sits on a bright star we’ve named Polaris, the North Star. The stars nearest Polaris will travel in a tight circle around it as Earth rotates, never rising or setting at a horizon. The farther out from Polaris the stars are, the wider their circles. Far enough from Polaris the stars’ larger paths take them from one horizon to the other; these stars rise and set. If we were on the equator, the stars due east would rise vertically, and set due west. From our latitude as one’s gaze moves south the apparent motion of the stars follows an arc above the southern horizon; the center of that arc is the southern axis, which we can’t see because it is above the south pole beyond the horizon.

The photograph of the oak tree I’m sharing here covers a lot of sky in its wide field of view. The stars near the bottom of the image are in the south, arcing across the sky as they travel around the southern axis below the horizon. The stars at the top of the photograph are traveling in a wide circle around the northern axis, which is out of view above and to the left. The area between the southern arcs and the northern arcs is the celestial equator. Because we are north of Earth’s equator, the celestial equator is in the southern half of the sky; were we on the equator, it would extend from east to west directly overhead.