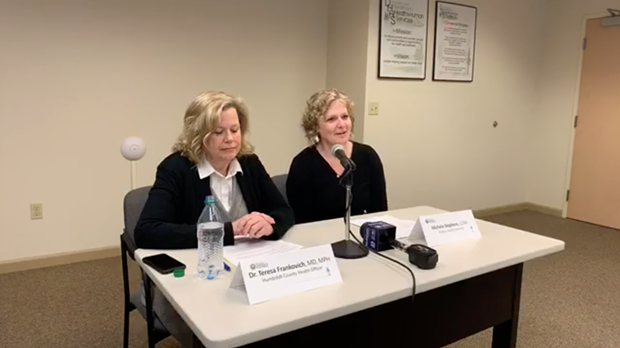 Humboldt County Health Officer Teresa Frankovich has declared a local health emergency in response to the COVID-19 virus, describing it as a proactive step that will free additional resources and increase coordination between state, local and federal agencies.

But, during a press conference this morning, Frankovich made clear that local conditions have not changed and played no part in the declaration. To date, Humboldt County has had just a single confirmed case of COVID-19 — that of someone who traveled to China and tested positive for the virus upon their return. Eleven other people have been tested, Frankovich said, but none had the virus. To date, there has been no known community transmission of the virus locally, though Frankovich said flatly that she expects that will change.

“It will almost certainly occur,” she said.

Officials also announced this morning that Humboldt County now has the ability to test for the virus locally, both in public and private laboratories. But Frankovich stressed that it will be hospitals and primary care physicians who order tests for patients, not Public Health. Residents concerned they may have COVID-19 are urged to call their providers to discuss next steps.

With 143 confirmed cases of the virus in California, and hundreds more popping up throughout the country, some cities have taken the pro-active step of banning large public gatherings. Frankovich said Humboldt County is not taking that step at this point, noting that “we may be in this for the long haul” and, consequently, before taking actions that cause widespread disruption in people’s lives and livelihoods it’s important to make sure they are warranted.

She pointed to the Centers for Disease Control’s protocols for tiered responses based on local conditions, saying that additional local cases would trigger a more aggressive public health response.

Frankovich said skilled nursing and senior living facilities are a “large focus” currently, as the virus has proven far more deadly in older patients and those in otherwise poor health. She said Public Health is communicating with local facilities to make sure they have proper protocols in place to monitor patients and visitors. She said more drastic steps, like a temporary ban on visitors, could be taken but they would have a “huge impact” on residents in these facilities and she doesn’t feel they are warranted in the absence of additional local cases.

With the emergency declaration, the county has activated its Office of Emergency Services protocol. Humboldt County Sheriff William Honsal said this is enabling agencies to work on both coordinated public messaging and proactive planning for various contingencies so it is prepared if the virus spreads locally. Honsal said that planning includes assessing both the capacity of local medical providers and local government and how those may diminish in a situation in which providers and employees fall ill.

The World Health Organization declared COVID-19 to be a global pandemic this morning, with China, Iran, South Korea and Italy facing the most widespread transmission of the virus. In the United States, more than 1,000 cases have been confirmed across 38 states and the national death toll has risen to 31.

Again, to date, there has only been a single isolated confirmed case in Humboldt County, though the declaration describes the potential for more cases as “an imminent threat.”

“We currently have no confirmed cases of COVID-19 in Humboldt County, but we know that is likely to change soon based on what is happening across the state,” Frankovich said in a press release. “More cases will mean increased demands not just on Public Health but also on our hospitals, clinics, EMS and other agencies and providers that are such a critical part of every community’s response.”

Some local events have been cancelled by organizers out of an abundance of caution, including the Humboldt Folklife's St. Patrick’s Day Barn Dance and Ceilidh scheduled for Friday at the Arcata Veterans Hall and a Cannabis on the Coast event scheduled for April 18, which has been postponed until fall.

While classes at Humboldt State University and College of the Redwoods are  making contingency plans and preparing to teach students remotely, if necessary.


College of the Redwoods this afternoon announced it was suspending classes the week of March 23-27 to prepare for the “the eventuality that we will need to suspend face-to-face instruction,” according to a release.


In a campus statement released yesterday, HSU President Tom Jackson announced the suspension of all “international travel and non-essential domestic travel” until the end of spring semester, which runs through May.

"The safety of our students, faculty, and staff is paramount,” Jackson said in the statement. “Currently, the risk of contracting COVID-19 during international travel is not fully known, so we are taking proactive measures. We understand that this decision will be disappointing, especially given faculty, staff, and student commitment to global engagement, but it is an important decision given current circumstances."

Read the DHHS release and the county's emergency declaration copied below, and find information from the CDC on how individuals, households and communities can stay healthy and prevent COVID-19 transmission here. You can also watch the entire press conference here.

Humboldt County Health Officer Teresa Frankovich, MD, has declared a Local Health Emergency in response to the coronavirus disease 2019 (COVID-19) outbreak in California and beyond.

This action is expected to free up additional resources within the county and increase coordination between local, state and federal authorities working to respond to the outbreak.

Frankovich called the emergency declaration “a timely and important step that will enhance our ability to increase preparedness activities and respond appropriately to any additional COVID-19 cases within the community.”

She noted that while this is an important administrative step to take in light of the rapidly evolving situation throughout the world, it does not reflect a significant change in our own community.

“We currently have no confirmed cases of COVID-19 in Humboldt County, but we know that is likely to change soon based on what is happening across the state,” Frankovich said. “More cases will mean increased demands not just on Public Health but also on our hospitals, clinics, EMS and other agencies and providers that are such a critical part of every community’s response.”

Although testing capacity at public health labs remains limited at this time, Public Health Lab Manager Jeremy Corrigan said, “It is our understanding that some commercial labs are beginning to offer testing as well, which would increase testing availability for our community.”

Frankovich said providers will be able to make decisions with their patients about testing and route specimens through local public health or commercial labs, depending on the clinical situation, local lab capacity and provider preference.

Local health care providers are being made aware of these options today.

Humboldt County Department of Health & Human Services Public Health Director Michele Stephens said the declaration is expected to “open up resources to assist with in-the-moment needs, like staffing and equipment, as well as taking the first step toward potentially recouping costs once the emergency is resolved.”

The Board is expected to take up the declaration at its March 17 meeting. Currently, Humboldt County has no known cases of COVID-19.

For current information about COVID-19, visit CDC.gov or CDPH.ca.gov. Local information is available 24 hours a day at humboldtgov.org/HumboldtHealthAlert, or during business hours by emailing covidinfo@co.humboldt.ca.us or calling 707-445-6200.


Read the full declaration below:


WHEREAS, Humboldt County Code section 2210-8 empowers the County Health Officer to declare a Local Health Emergency for a period up to seven (7) days in the county or any area thereof, including but not limited to an imminent and proximate public health threat of the introduction of any contagious, infectious, or communicable disease, chemical agent, noncommunicable biologic agent, toxin, or radioactive agent; and

WHEREAS, a novel coronavirus, COVID-19, causes infectious disease and was first detected in Wuhan City, Hubei Province, China in December 2019, and symptoms of COVID-19 include fever, cough and shortness of breath and outcomes have ranged from mild to severe illness, and in some cases death; and

WHEREAS, on January 31, 2020, U.S. Department of Health and Human Services Secretary Alex M. Azar II declared a public health emergency for the United States to aid the nation’s health care community in responding to COVID-19; and

WHEREAS, the Centers for Disease Control and Prevention has determined that the virus presents a serious public health threat; and

WHEREAS, the declaration does not reflect any dramatic change in the health of our community, and this step is being taken to help ensure adequate capacity to address the community transmission phase of COVID-19; and

WHEREAS, when we begin seeing increasing numbers of cases it will undoubtedly be accompanied by increased demands on local public health as well as our community partners who are part of the response such as hospitals, clinics, emergency medical services (EMS), law enforcement and other agencies; and

WHEREAS, it is important to declare a Local Health Emergency because it opens up resources local governments can access to assist with in-the-moment needs, like staffing and equipment resources, as well as recouping associated costs once the emergency is resolved.

NOW, THEREFORE, IT IS HEREBY DECLARED AND ORDERED that said Local

Health Emergency shall be deemed to exist throughout said county as prescribed by state law, ordinances, and resolutions of this county, and by the County of Humboldt Emergency Operations Plan, as approved by the Board of Supervisors on 7 April 2015, until its termination as proclaimed by the Board of Supervisors of the County of Humboldt, State of California.