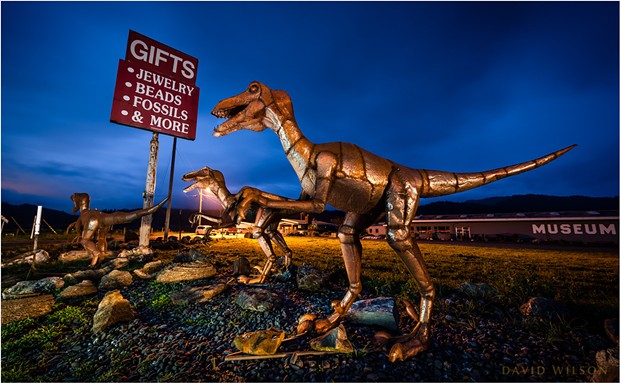 Since childhood, dinosaurs have held a fascination for me. If dinosaurs roamed the earth today, my photo stories would probably be about them or, perhaps more likely, about dinosaurs at night.

Alas, they are an exceedingly rare breed and the opportunities to photograph them, or even to see them at all, are few and far between. As a matter of fact, until recently I had never had any luck catching a dinosaur on film or digital, though I have tried; I’ve had more luck photographing meteors.

It turned out I needed to rethink my approach. I am no wildlife stalker and, for all my efforts to track down a dinosaur, I had come up empty every time. I hadn’t failed, I’d simply discovered a number of ways how not to do it, and it was time to regroup. I would try a passive approach next and toward that end I purchased a couple of high quality trail cams. If I could determine where dinosaurs roamed, I reasoned, I might be able to catch some candid photographs up close of the creatures in their native habitats.

For months I set my dinosaur trail cams out in those most likely of habitats for these prehistoric beasts: primordial old growth redwood groves. But I got nothing.

Of course, I captured the usual bears, mountain lions, bobcats and the like, but nothing out of the ordinary. The real quarry eluded me. I tried setting my cameras up by streams, near rivers, in prairies, meadows, beaches and sloughs. Nothing. No dinosaurs. Not even in Fern Canyon. I began wondering whether anyone ever sees these creatures.

But I finally caught a break, and naturally at a time when I was least expecting it and not at all trying for it. On my way home one afternoon from collecting my trail cams from an unsuccessful trail watch down near the Avenue of the Giants, I stopped in at Chapman’s Gem and Mineral Shop. 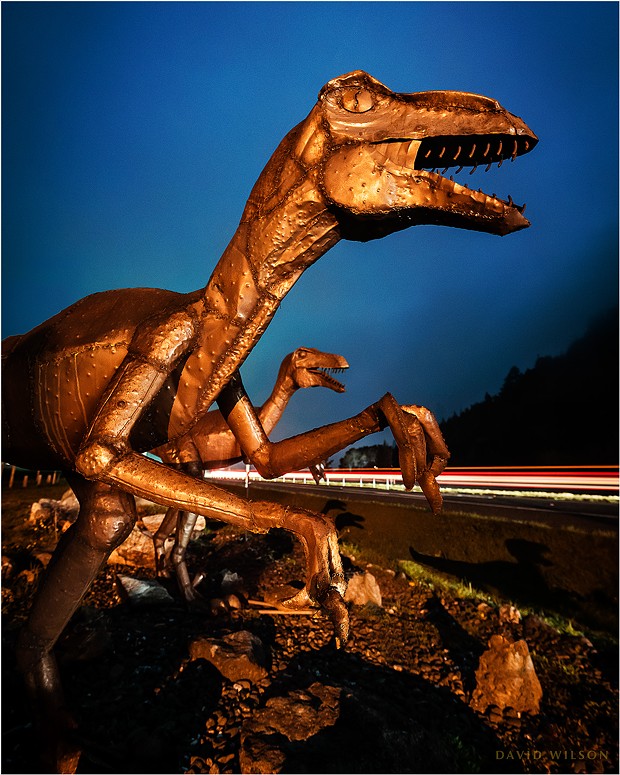 I had with me a large spherical rock I’d discovered in our creek down by the Humboldt-Mendocino county line in my youth and I wanted to inquire as to the nature of it. Maybe it was a big geode, I hoped; nope, they told me. “It’s sedimentary, my dear chap,” the man said.

Disappointed at finding out my round rock was merely so much detritus stuck together and frustrated at my failure to captured any dinosaur images, I failed to notice my trail cams tumble out of the truck as I climbed in. I drove off without them. It was several days before I realized their absence.

After a prolonged search at home and in the truck, I called Chapman’s to see if they’d found them. They hadn’t. But after the call, the good people there took a look for them out by the far parking area for me, and called back to report that they had found them. I picked them up and for more days they sat on my desk. I wasn’t sure what I wanted to do with them. Frankly, I was tired of having zero success and had little energy for them. I didn’t know where in the wilderness I should place them next, or if I even wanted to anymore.

But I knew that sometimes it’s best to step away from a project and let it steep, and with that thought I moved to put them away… and noticed that the cams had captured a few images. Random parking lot activity from Chapmans, I figured, and I was on the point of deleting them when an old movie came to mind. Partly it came to mind, I should say, for I don’t recall its title, but in the movie a photographer discovered after developing his negative that he had captured a murder in progress. Hmm, I thought, that could be me with these photos! So I looked.

And there they were. My dinosaurs. The cams had captured a marauding pack of three velociraptors moving through Chapman’s Gem and Mineral Shop’s front yard. Finally, I had my quarry. To think: If I hadn’t lost my trail cams, I never would have caught them. Turns out, some treasures you only find when you stop looking.

PS: I reached out about the origin of the velociraptor sculptures, but as of the time of this writing I have not heard back. I do know they aren’t the work of the local metal sculptor the initials of whom are D.M., as I asked him. To keep abreast of