March 16, 2020
comment
California Gov. Gavin Newsom on Sunday called for seniors and people with chronic conditions to isolate themselves during the coronavirus pandemic, raising questions about the state’s capacity to ensure delivery of food, medicine and services to some of its most vulnerable residents.

Newsom pledged that his office would address specific issues related to this directive in a plan to be released on Tuesday, after state officials and private industry collaborate and work out the details. He did not say how long he expected that people would have to isolate themselves since no one knows how long the pandemic will last or how bad it will get. 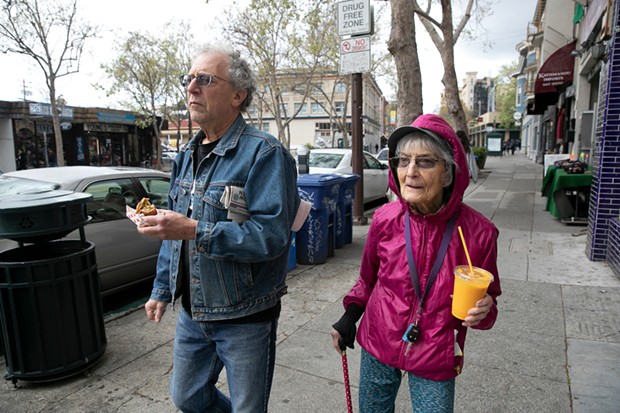 The governor’s advisory does not carry the force of law, but Newsom said he would not hesitate to sign an executive order making it mandatory if the directive is not followed.

“If you want to establish a framework of martial law which is ultimate authority and enforcement, we have the capacity to do that, but we are not at this moment thinking that is a necessity,” Newsom said.

It’s unclear how the government will help coordinate the delivery of meals to an estimated 5.7 million California seniors and millions of other Californians who suffer from heart, respiratory, kidney and immune system disorders.

“We are doing so with our eyes wide open at the magnitude of what that means and the need to provide wraparound services to support our seniors in need of medical supplies, in need of meals and the like,” Newsom said Sunday at a press conference.

The traditional method of delivering food to seniors is through “access points” like a senior center, said Los Angeles Regional Food Bank Chief Executive Officer Michael Flood. But dozens of seniors congregating in a small space is no longer feasible, so other options will have to be considered.

Newsom emphasized multiple times on Sunday that the state will partner with private industry to respond to the pandemic, whether that means feeding children with free or reduced-price lunches from shuttered school districts or seniors who are isolating themselves. Flood said the LA Regional Food Bank envisions something similar to feed the 28,000 seniors it serves each month.

“We’ve never had this type of discussion, how we can possibly leverage [private industry] logistics to deliver for a nonprofit,” Flood said. “We‘re going to have to figure this out.”

Here are a half-dozen questions raised by the governor’s announcement:

How many people are we talking about here?

California is getting grayer. Newsom said his self-isolation guidance would apply to the approximate 5.3 million seniors age 65 or older who live in the state. However, according to 2019 Census numbers, that number may be closer to 5.7 million.

And it’s not just the elderly who are being advised to stay home. So are people with underlying chronic health conditions. That means people with heart and respiratory diseases, diabetics and asthmatics. That’s a lot of people.

In California, about one in three adults— more than 8 million people — live with cardiovascular disease, which includes heart failure, artery disease, hypertension, strokes and other disorders, according to 2016 state data.

Also, about 2.5 million adults in the state have been diagnosed with diabetes, while 2.3 million adults have asthma and another estimated 1.5 million have chronic obstructive pulmonary disease.

“We are prioritizing their safety because of their unique vulnerabilities to this virus,” Newsom said.

Health officials say that older adults, as well as people with compromised immune systems and those with underlying chronic medical conditions, seem to be at higher risk of developing serious, life-threatening complications from the coronavirus.

Out of California’s 335 positive cases as of Sunday, 116 were among people 65 and older.

In China, where the virus was first detected, the majority of deaths have been among older adults, who tend to have weaker immune systems and have a higher rate of chronic disease. While the mortality rate for COVID-19 remains low — about 2.3 percent — it increases with age or when combined with a chronic illness.

For example, the COVID-19 mortality rate in China for people with heart disease jumped to 10.7 percent, and to 7.3 percent for patients with diabetes. The mortality rate for those with respiratory illnesses was 6.3 percent.

Similarly in Italy, a national analysis earlier this month found that the average age of 105 people who died in relation to COVID-19 was 81. Most of those patients were men and two-thirds of them had three or more existing conditions.

So, what does self-isolation mean anyway? Can they go to the grocery store or pharmacy?

The idea of Newsom’s plan is to keep people who may be sick away from seniors and people with compromised immune systems or weakened hearts, kidneys and lungs.

Newsom did not give any specific advice, but his plan likely would mean people staying home from work and other public places as much as possible, and not meeting with friends, even at home.

Guidelines from the Centers for Disease Control and Prevention say people should restrict activities outside their homes except for seeking medical care. On Sunday, the CDC advised that all gatherings of 50 people or more be cancelled for the next eight weeks, from weddings to sporting events.

In New Zealand, self-isolation protocol allows for others to drop off food and supplies to those in isolation.

Until recently, only people who were infected or believed to be infected by the coronavirus but didn’t require hospitalization had been asked to home isolate for 14 days.

Newsom recognized that asking millions of seniors to stay home was bound to create anxiety.

“We are doing so with our eyes wide open at the magnitude of what that means,” he said. He added that his team is working on services to help these seniors with food and medication.

If these people can’t go to the grocery store, how are they going to eat?

Good question. Newsom said that the state has “been working for days” to answer this question, but he did not provide specifics.

Newsom did allude to “strike teams that will support the social safety net and those services for our seniors” run by Mark S. Ghilarducci, director of the California Governor’s Office of Emergency Services.

“What is really important is to understand what a massive logistics operation it would be to take a formerly pretty self-sustaining group of people and expand an already stretched safety net to cover that group of people too,” said Ashley McCumber, executive director of Meals on Wheels San Francisco, which serves hot meals to 3,600 people who are over 60 or disabled each week.

McCumber said that the need for home-delivered boxes of groceries will grow dramatically, as will the need for hot meals for those who rely on senior day centers and other facilities because they can’t prepare their own meals at home.

Food banks across California are already facing shortages of volunteers and closures of their distributions sites due to coronavirus concerns.

Newsom said that he is not ordering restaurants to close, in part, because they could be part of the state’s plan to deliver food to people in self-isolation. Instead, restaurants were asked to cut their number of customers in half, keep them separated and stress take-out meals.

“We want to expand the points of access to get those deliveries. Restaurants by definition provide those points of access,” Newsom said. “So having an organized construct that allows delivery of hot, prepared and nutritious food within an existing infrastructure we think is appropriate to this moment.”

What if you’re homeless and you’re also a senior or have a health condition?

Newsom included the homeless, along with seniors and those suffering from chronic conditions, among the three most vulnerable groups in the state. But the governor’s directive was short on details for those who are seeking to self-isolate while they are unhoused.

Newsom said the state would prioritize getting homeless people indoors as soon as possible, either in hotel and motel rooms or in one of the state’s 450 newly-purchased trailers. In an executive order issued Thursday, Newsom directed the state health agency and its office of emergency services to be prepared to make available accommodations “suitable for use as a temporary residence” and to commandeer those sites, if necessary.

The U.S. Office of Housing and Urban Development says there were more than 108,000 unsheltered homeless people in California on any given day in January 2019. Those numbers are concentrated in the Bay Area and Los Angeles, and the counts have been found to dramatically underestimate the real numbers.

“Individuals experiencing homelessness have an increased likelihood of chronic medical conditions (such as diabetes, asthma, and hypertension) as well as coinciding mental health diagnoses or histories of substance use,” according to the HUD document. “During crisis situations, health conditions can be exacerbated if health care regimens are not

maintained, or if histories of trauma trigger high-risk behaviors.”

What about seniors who work but can’t work from home? Is the state going to help?

More than one million seniors, or about 19 percent of Californians ages 65 and older, are in the labor force, according to 2018 Census data. Many continue to work because they don’t have enough retirement savings or social security to cover expenses.

For seniors who can’t take their work home — for example, those who work in retail, the service industry, manufacturing or as drivers — self-isolation could mean losing wages or even jobs.

Newsom made it clear that seniors working on the medical frontlines of the coronavirus response — such as nurses, doctors and pharmacists — are not exempt from the directive to self-isolate. A 70-year-old emergency room doctor in New Jersey contracted the virus and is in intensive care. He led his hospital’s emergency preparedness.

The Governor’s office did not immediately respond to questions about whether the state would provide financial aid to low-income seniors who are forced to miss work due to the coronavirus.

On Thursday, Newsom signed an executive order waiving the one-week wait time for those seeking unemployment insurance or disability benefits due to COVID-19.

On Saturday, the U.S. House of Representatives passed a legislative package that would provide emergency leave, including two weeks of paid sick leave and up to three months of paid family and medical leave. The Senate will consider the package early this week.

The state’s public health department recommends that all people keep their distance from each other, disinfect their homes, wash their hands frequently and avoid touching their faces.