It was an unprecedented task. Food for People had received more than 1,161 food boxes from the California Association of Food Banks thanks to a $600 million allocation aimed at feeding households during the COVID-19 outbreak.

Food for People Executive Director Anne Holcomb said the food bank elected to distribute more than 500 of the boxes through its backpacks for kids weekend hunger relief program, knowing those families were already struggling before a shelter-in-place order shuttered most businesses in the county, leaving scores of people out of work. Then it decided to give out the rest on Friday via drive-through distribution designed to limit physical contact in the north parking lot of the Bayshore Mall. It was slated to begin at 2 p.m. and span two hours.

“Forty-five minutes before we were set to start distributing, we already had 50 cars lined up,” said Holcomb, adding that volunteers loaded up cars from 375 different households representing more than 1,300 people with up to two boxes of food. “It just shows the level of need out there.” 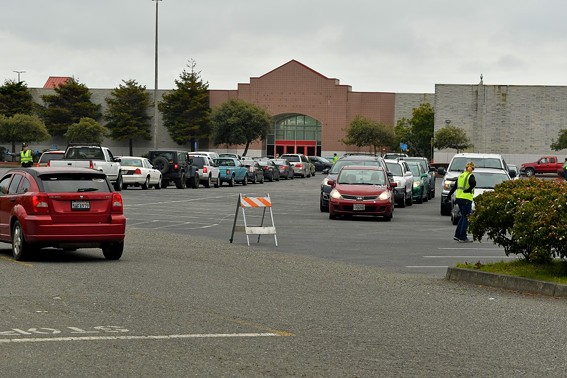 According to the U.S. Census, more than 20 percent of Humboldt County households lived in poverty — earning less than $26,167 annually for a family of four — prior to COVID-19, which has brought devastating economic impacts.

A survey conducted by the Humboldt County Office of Emergency Services of 519 local businesses — representing about 16 percent of local employers — found they have combined to lay off more than 1,700 workers lost more than $21 million in revenue due to COVID-19. Eleven businesses reported closing entirely.

And while the federal $2 trillion CARES Act provides $600 a week in additional unemployment benefits for most laid off workers, California’s Employment Development Division has been struggling to keep up with unprecedented demand, having received 2.3 million new claims over the past month, more than were filed in all of 2019. Consequently, benefits checks have been slow in arriving, with reports indicating some have seen more than a month past between filing an application for benefits and the arrival of their first check from the state.

“We’re starting to see a real surge over the last couple of weeks in people asking for help,” she said, that some of the local network of more than 15 food pantries have doubled or tripled weekly allocations.

And the surge in need comes at a challenging time for the nonprofit, which was forced from its main building last month after a sewage leak caused widespread damage. The nonprofit is now operating out of a warehouse with limited office space in the old Chamber of Commerce building on Broadway in Eureka. It’s also having to dramatically rethink operations to allow for the social distancing measures needed to slow COVID-19’s spread.

Holcomb said since the Great Recession, Food for People has really looked to focus on distribution models that provide people with choices more akin to the dignity of a traditional grocery shopping experience. But with COVID-19, that’s much more difficult.

“We’re setting up distribution in different communities,” she said. “Most people are very appreciative and honor social distancing but not everybody does. If we don’t have enough people to manage the crowds, it turns into something where it isn’t safe for anybody.”

And a good number of the volunteers who have generally supported the nonprofits efforts of this sort are over the age of 65 and ordered to stay at home.

“A lot of our typical volunteers are older,” Holcomb said. “They’re retirees, so we’ve had to ask them to step back, which kills them, but we’ve got to keep them safe.”

So Holcomb said Food for People has started leaning more heavily on other community-based organizations, offering to drop off bulk food shipments for them to distribute.

Anyone in need of food assistance should visit www.foodforpeople.org or call 407-0447 for the latest on distribution, Holcomb said.

For folks looking to help, she said Food for People can’t take food donations from individuals at this time, as coordinating to receive them in a way that honors social distancing practices and also sanitizing them is too labor intensive.

“It’s just not the time,” she said. “We can’t safely handle donations from a bunch of different sources.

Instead, she urged those wanting to help to donate financially via the nonprofit’s website so staff case use the funds to purchase pallets of food, which is much more efficient.

Food for People is also still in need of additional warehouse space, Holcomb said, adding that she’s thinking creatively, including a potential partnership with local schools. The nonprofit could also use additional young, able-bodied volunteers, she said, adding that anyone interested should fill out a form on the organization’s website. 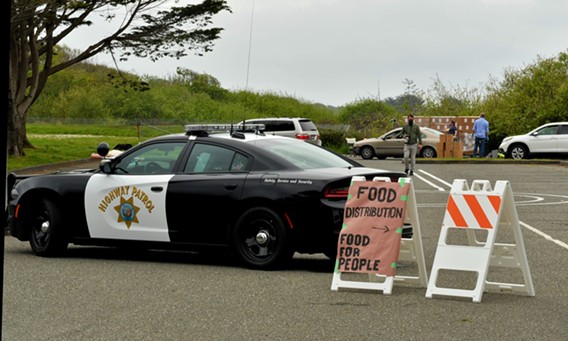 And Holcomb stressed that anyone who missed out on Friday’s distribution — which she said was made possible with the help of Cooperation Humboldt volunteers and traffic control from the California Highway Patrol and Eureka Police Department — should contact their local food pantry, many of which are open extended hours. As Food for People pivots to new distribution models to meet an unprecedented need, Holcomb said she’s very grateful for the outpouring of community support she’s seen in recent weeks.

“We really appreciate the community response to this as we're all try to navigate the fear and the concerns about how our community will survive,” she said.