by Manuela Tobias and Robert Rodriguez, The Fresno Bee

There just wasn’t enough food to feed the 215 families who showed up. It was twice the number of families that needed food a week earlier, she said.

But that same week, on a farm just 20 minutes away, at least two fields of fresh lettuce were disced back into the ground, left to rot as the restaurants that buy the produce struggle to stay afloat. Solorio’s husband works on that farm and suggested that the farm donate the lettuce to a food bank.

“But who is going to pick it?” she asked.

The coronavirus has forced the entire world into disarray, but the food industry in particular. With restaurants closing or reshaping business models around slimmed-down take-out menus, the dominoes are starting to fall for the farmers who suddenly have nowhere to take their food.

And, at the same time, as more people find themselves out of work, food banks are teeming with hungry families. But getting food from fields to the hungry families that need it isn’t as simple as it sounds, industry experts say.

Much of the food grown for restaurants, which constitutes about half the market for produce, is nearing the end of its perishable life cycle. Researchers expect to see a $688.7 million decline in sales for farmers from March to May 2020.

Lettuce growers have been among those hardest hit in Fresno County as the economy grinds to a near halt.

Longtime farmer John Harris, of Harris Farms, was growing 204 acres of lettuce for Salinas-based Taylor Farms, one of the giants in the industry. But that all changed when the restaurants they supply turned off their stoves. Last week, Harris’ workers plowed under nearly 13 acres of fresh lettuce that had nowhere else to go.

“It is a very unfortunate situation, but the demand all of a sudden was just falling apart,” Harris said.

For many farmers, it’s more cost-effective to let crops rot in the fields. They can’t afford to harvest it if there is no market for it, and food banks can’t cover the full cost of labor.

“The food system was built to make sure every single Outback Steakhouse and Chili’s has access to every single food item,” said Cannon Michael, president of Bowles Farming Company in Los Banos. “To have a system like that means that if the demand collapses, there’s a ton of waste that happens.” 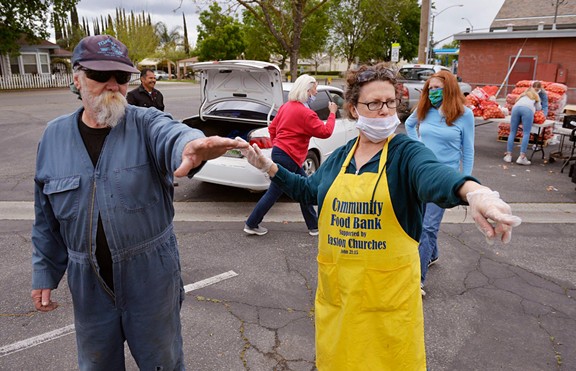 Dairy farmers in the San Joaquin Valley, the center of the state’s dairy industry, were forced to dump thousands of gallons of raw milk in recent weeks because restaurants, schools and exports have all but dried up.

Restaurant dairy processors can’t simply redirect their cheese and butter to retail because they cut huge slabs the grocery store can’t take. And in part due to restrictions on buying dairy at major grocery stores, the industry isn’t seeing enough demand to stay afloat.

Why not donate all that unused milk to food banks? Federal regulations require that milk be processed first, and that costs money dairy farmers don’t have right now. Raudabaugh said Western United Dairies has nonetheless been working hard to donate excess to food banks, which should start next week.

The state has now directed farmers to stop dumping and instead either dry the cows, so they don’t produce more dairy, or beef them, according to Raudabaugh. But both options pose tremendous costs to farmers.

And by producing more meat, “we are creating a reciprocal crisis on the beef market,” she said. 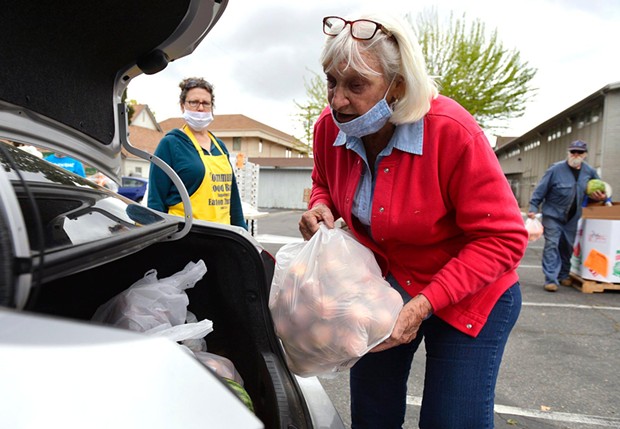 Food loss and scarcity have long been a problem in the central San Joaquin Valley, a region that leads the nation in agricultural production and hungry families. About 13.5 percent of the valley, or 352,000 people, struggles to afford the food they need, according to Feeding America.

The coronavirus has intensified the issue.

Pre-pandemic, the Central California Food Bank served around 280,000 families per month. Anecdotally, agencies have reported anywhere between a 40 percent to 100 percent increase in clients accessing services, according to Chief Operations Officer Natalie Caples.

Typically, they stock plenty of canned food, rice, pasta and beans to give needy families, but struggle to find fresh fruits and vegetables. But the coronavirus has also turned the food bank world upside down.

The state Department of Food and Agriculture has been urging farmers to donate their surplus produce, with success. Last week, they moved 100 truckloads of food on top of the 150 loads they typically ship to food banks across the state, according to Steve Linkhart, director of Farm to Family at the California Association of Food Banks.

“On April 1, we booked 4 million pounds in one day,” he said. “I thought my team was making an April’s Fools Day joke.”

For the first time in 10 years, food banks are getting avocados, Linkhart reported. He had just gotten off the phone with a dairy that donated ten pallets of high-end cheese.

Now, the Central California Food Bank is overflowing with lettuce, berries, oranges and melons, according to Jaclyn Pack, food acquisitions manager, but rice and beans are running low. Wait times on orders have doubled to as long as eight weeks.

Pack said the food bank would have to ration their funding, as they could run out of money to purchase those pantry staples.

The food bank has also lost almost 70 percent of its volunteers while communities stay home, making it even more challenging to move produce out of their warehouses and onto dinner tables before it goes bad. Most of their volunteers were seniors, she explained, who experts have said are more at risk for severe complications to COVID-19.

“We need people to donate money, food and we need volunteers to show up and give their time,” Pack said.

The state food bank is lending a hand. The Central California Food Bank expects to receive 2,200 boxes of pantry items next week, up from 1,000 this week, to distribute at locations struggling to find volunteers. The boxes are pre-packed and require less work on the ground.

The state has also offered to deploy the National Guard, which has been active in Bay Area food banks, but plans haven’t been finalized.

She has shared with volunteers her own N95 masks, which she uses to keep her acute asthma and allergies at bay during pesticide sprays. She has now started sewing masks for volunteers and making hand sanitizer using products she had at home.

“It’s a big challenge,” Solorio said. “I’ve told the food bank. We need to protect our volunteers because these people need to eat.”

Manuela Tobias and Robert Rodriguez are reporters with the Fresno Bee. This article is part of The California Divide, a collaboration among newsrooms examining income inequity and economic survival in California.