It’s people like Stephen Kamelgarn, a family medicine doctor, who answered Gov. Gavin Newsom’s call for help preparing the state for a surge in coronavirus patients.

Kamelgarn, 69, still practices part time in retirement. He signed up immediately for Newsom’s California Health Corps, even though he’s in the age group most at risk of falling severely ill from the virus.

“I’ve got an active medical license and it’s my job; this is what I do,” Kamelgarn said. He’s always wanted to do something “above and beyond,” he said. “This is it, COVID is it.”

Kamelgarn is one of more than 86,000 people who as of Thursday applied for the health corps, which seeks retired and part-time medical workers as well as those still being trained. Of those, 350 people already have been accepted into the program and are on standby to staff the Sleep Train Arena in Sacramento, which is being prepped for up to 400 patients with mild to moderate cases of COVID-19.

State officials want to build reserves of doctors, nurses, paramedics, pharmacists and other frontline providers to help staff some of the 66,000 additional beds that might be needed for the anticipated mid-May surge.

On numbers alone the health corps already shows promise, far exceeding the state’s expectation. Officials had estimated applicants would mostly come from a pool of about 37,000 retired or part-time medical workers.

But the reserves program also has raised concerns. Should older medical workers even be exposed to patients with a virus known to be more dangerous for seniors and those with underlying medical conditions? Will medical professionals be lured from areas already strapped for health resources?

A day after Newsom announced the program, 10 legislators whose districts include rural regions sent a letter to the governor to express concern that local health workers who joined the corps might be redeployed to urban areas. Such an exodus would leave their communities short-staffed and unprepared for any influx of patients.

“Our fear is they will divert those workers to other parts of the state,” said Assemblyman Jordan Cunningham, R-San Luis Obispo, a lead author on the letter. “If we don’t end up needing those workers, then absolutely send them to critical areas, but let’s make sure we have staff here, too.”

Cunningham said Monday he had not yet received a response from the governor’s office.

State officials said the idea is to keep health corps members in their local areas.

Still, some counties afraid of losing local workers are enlisting volunteers on their own. San Luis Obispo County converted the recreation center at Cal Poly into a 900-bed alternate care facility that can accept coronavirus patients who don’t need intensive care or a ventilator.  The county put out a call for local medical professionals willing to staff that facility and had already started compiling a list of volunteers when the state announced its health corps. The county will provide malpractice insurance, but it can’t afford to pay its volunteers.

The state’s health corps will pay medical staff and provide transportation and lodging to workers who come from out of the area.

Newsom has yet to provide details about the program’s cost. He has said, however, that the corps will be financed using federal reimbursements, state dollars, and support from the private sector.

Who is signing up?

People with underlying medical conditions and those over 65 years are more at risk of developing serious complications from the virus. Kamelgarn knows his age alone puts him in a high-risk group. He also has hypertension and type 2 diabetes, underlying conditions that add to his risk. He said his conditions are under control and he is less concerned than his wife.

“My wife is really scared,” Kamelgarn said. “Let’s face it, I’m a high-risk individual, but I’ll take all the precautions I need to take.”

Joanne Spetz, associate director of research at the Healthforce Center at UCSF, which provided recommendations about how to increase the state’s medical workforce, said high-risk workers should be placed carefully, ideally in roles with little exposure. The workers could follow up with patients by phone or take some of the load off the active workforce by seeing patients with other medical issues, she said.

Yet state officials said they have been clear that applicants should expect to work with patients who test positive for coronavirus. “Individual applicants should consider their personal risk factors when deciding whether to participate,” Butler of the state’s health and human services agency said in his email.

Dr. Dennis Pocekay, 70, of Petaluma, doesn’t see himself running ventilators — he might be a little rusty in that area, he said. But he’s prepared to lend a hand where he can.

He retired from full-time work 10 years ago after 30 years at various Kaiser Permanente hospitals and clinics working in internal and occupational medicine. He’s volunteered throughout his retirement and kept his medical license active.

“I figured if they call me, they really need me, and if I’m really needed I won’t say no to helping people,” Pocekay said. He’s already signed up for shifts managing Sonoma County’s COVID-19 hotline.

Nurses a priority for health corps

California needs to have its backup workforce ready to go in the next month or so to stay ahead of a surge, Spetz said.

Officials at California’s public health department said they are vetting applications and can’t yet say whether they will have the right mix of skills, or how many people will qualify for the corps.

One thing is certain, Spetz said: she expects nurses to be in high demand.

“It’s easy to say nurses simply because nurses are the most numerous of the health profession; there are three or four times as many nurses as physicians in California,” Spetz said. “And when you look at hospital care, nurses are there 24/7 by the bedside.”

“Nursing is ubiquitous,” she said. “There are so many of them and we need so many.”

Breanna Ortiz, a senior nursing student at West Coast University in Orange County, said she hopes she can help and feels ready to do so.

Ortiz, 24, was supposed to start her last clinical rotation last week at UC Irvine Medical Center before her August graduation. But hospitals canceled student training as they began to prepare for the outbreak. It’s a little ironic, given the need for nurses at this moment, Ortiz  said.

“There are nurses who are working overtime and they’re eventually going to be burned out or they’re going to be exposed and will need to quarantine, and that’s when we can step up,” Ortiz said.

Recently, the Department of Consumer Affairs, which oversees the board of registered nursing, issued a waiver loosening requirements for some students, allowing them to complete only half of their training hours with patients, down from the standard 75 percent. The other half of the clinical hours required for graduation could be done via online simulations.

But “how can we even get the 50 percent direct patient care hours if hospitals aren’t currently allowing students?” she said.

One solution would be to allow students to complete hours as part of the health corps, allowing them to graduate and help out during this pandemic. The Department of Consumer Affairs said it is up to nursing schools to decide whether a student’s participation in the health corps program would count toward their required clinical hours.

Jobs for the unemployed

Others applicants include professionals between jobs, like Sonya Frausto, a pharmacist in West Sacramento.

Frausto worked at a Raley’s pharmacy for two years before her position was eliminated last December. She decided to open her own community pharmacy, which is under construction, but the shelter in place order has thrown a wrench in her plans.

The health corps is a good opportunity to get back to work in the meantime, she said.

“I know that I can be of value, whether it’s directly testing patients, which pharmacists can do, to providing knowledge and providing emergency medication,” Frausto, 45, said.

Her biggest concern is her two children, a sixth grader and a freshman in high school, who like all students in California are supposed to be learning from home during the pandemic.

“That’s probably what’s keeping me up at night,” she said. “Before we’d be able to rely on our parents” for childcare, she said, but they’re over 65, and that’s no longer an option.

It’ll take arranging a network of friends and family members who can help check in on her kids, she said.

Her urge to help also comes from watching her husband, a respiratory therapist already working with coronavirus patients. “He’s making that sacrifice, so I need to do my part,” she said. 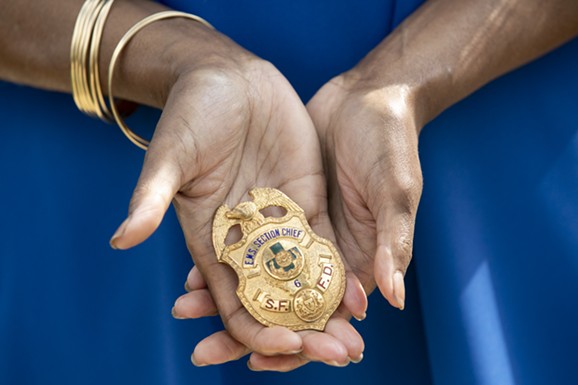 Jane Smith, a 64-year-old retired paramedic, shares that eagerness. She explained it this way: Her mother was a nurse and her dad a bus driver, and when you put the two together you get a paramedic and a deep commitment to public service.

Smith retired in 2011, but still volunteers for the state’s emergency medical services commission. She signed up for the health corps knowing the risks involved but said every day she drove an ambulance there was possible exposure to something.

“I’d be crazy to say I’m not concerned,” Smith said. “But I just don’t want to be sitting on the couch.”

Smith said she has paramedic friends in New York, and watching their situation on TV has made her anxious.

“If California and San Francisco are going to have similar issues, I want to participate,” Smith said. “My mind and spirit are there, I want to say my body is there but I’m not sure I can lift patients like I did 20 years ago, I may think a second on that.”

Smith said she also is an experienced emergency medical services teacher and administrator, and that may come in handy, too.