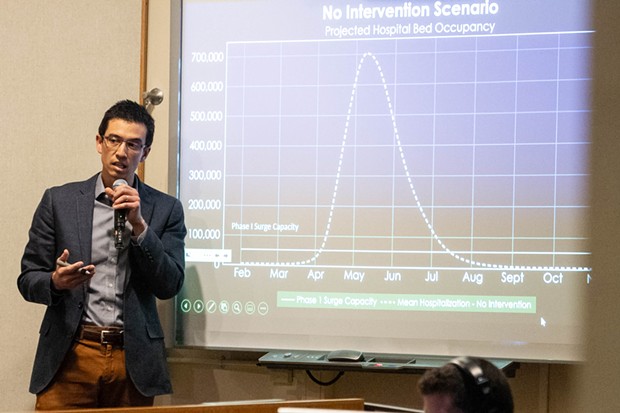 Local models used by Public Health to predict the spread of COVID-19 project that if Humboldt County keeps all current social distancing orders in place, it could still see 28 deaths by December, at which point there could be 145 hospitalizations, with 64 people under intensive care and 38 using ventilators.

That’s one of two model projections Deputy Health Officer Josh Ennis presented to the public at a dialogue last night that also included Sheriff William Honsal and Public Health Officer Teresa Frankovich, and was moderated by Lost Coast Outpost editor Hank Sims. The other projection was much more dire: If Humboldt County were to lift all social distancing orders and resume life as normal on May 1, the model projects we would see 188 deaths by July, at which point there would be 976 hospitalizations, with 408 people under intensive care with 251 patients using ventilators.

While both projections seem dire, the first would push local peak infection rates later into the year, giving the county and local hospitals more time to prepare and increase capacity. Ennis said current plans would effectively triple the number of local ICU beds, allowing providers to meet the projected demand. Under the second model, the system would be completely overwhelmed. 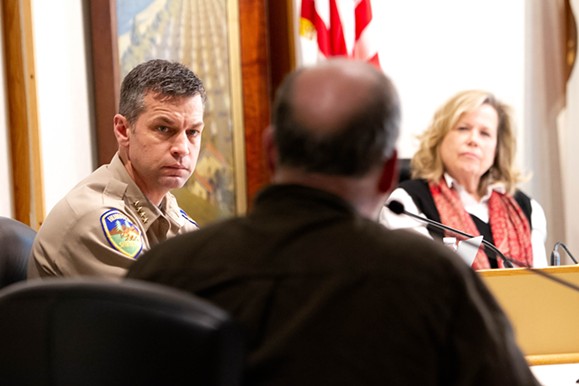 “Going forward, we’re going to be navigating the place between those two curves and trying to basically preserve lives and never overwhelm our healthcare system, while at the same time allowing some of that societal recovery we’re talking about,” said Frankovich.

But that’s clearly a delicate dance with a disease that has the potential for exponential spread, as Ennis made clear.

“Spread of the disease can quickly spiral out of control,” he said. “Think of it like a 100-car freight train and it’s speeding along down a railway. If you have to pull a break, it takes a long time for it to slow down.”

Frankovich and Ennis said the availability of testing is both a huge limiting factor in their ability to understand spread of the virus locally and a crucial component to any plans to ease current restrictions and re-open portions of society.

“We don’t have the ability to test everyone we want to test,” Ennis said, prompting Frankovich to jump in.

As of yesterday, 1,853 local residents had been tested for COVID-19, with 52 found to have the virus. (The county has seen just two positive cases since April 7 and 50 of those infected have since recovered and been released from isolation.) But the county still has strict protocols regarding under what circumstances someone gets tested, and testing is limited to people who are severely symptomatic, symptomatic with a known contact to a positive case or symptomatic with an underlying health issue. But nine of Humboldt County’s positive cases are believed to have been infected from unknown sources within the community, meaning the virus is circulating undetected locally. And studies have shown that more than 20 percent of COVID-19 patients never experience symptoms but are nonetheless contagious.

And that’s a problem when it comes to discussions of re-opening public life, as only comprehensive testing will allow officials to react quickly enough to counteract a surge in the virus.

“It’s really important we have robust testing in place so we know what’s happening in the community and we can test, we can trace and we can isolate,” Ennis said. “That is a huge piece of this that really needs to be in place … before we can take that [next] step, I think.”

“It’s really important we have robust testing in place so we know what’s happening in the community and we can test, we can trace and we can isolate. That is a huge piece of this that really needs to be in place … before we can take that (next) step, I think.” tweet this
But there continue to be supply chain issues with testing, which requires a number of specific supplies, from swabs to chemical reagents, that are in tremendously high demand throughout the state, nation and world. Frankovich indicated there are some signs that some of the supply chain limitations are easing, but offered no specifics or timetable as to when testing would be more widely available locally or when providers might be able to loosen criteria to begin testing mildly symptomatic or asymptomatic people.

Without more representative testing data, the county is taking some small steps toward loosening the restrictions that have been in place for the last month. Earlier this week, Honsal announced that the Sheriff’s Office main station would be re-opening to the public in a limited capacity and called on other government offices to do the same. He also urged businesses that were deemed “essential” under the shelter-in-place order and allowed to continue operations, but chose to shutter instead, to open. But those small steps also came with a mandatory facial covering order that went into place this morning, requiring all people to wear facial coverings when in public unless outdoors in situations where they can stay at least 6 feet away from other people at all times, with few exceptions.

“I know it’s not necessarily popular but we see [the mask order] as a precondition to lifting restrictions,” Frankvoich said.

Thursday’s discussion of local modeling came after Butte County Public Health Officer Andy Miller disclosed the median projections from a state model, based off the Johns Hopkins University model, on Friday. Ennis said that modeling was done based on data that is now a month old but the projection had Humboldt County seeing 40 COVID-19 deaths and 171 hospitalizations by July 1. The projections Ennis presented yesterday were based on more recent data, he said, using a model from the University of Pennsylvania’s open source formula.

Ennis cautioned that models are based on “a lot of assumptions about how the virus transmits” and, at this point, do not distinguish between urban and rural areas or take population density into account.

It’s unclear based on last night’s discussion whether the county has done modeling projections of scenarios between the two extremes presented: keeping all social distancing orders in place for the remainder of the year or lifting them entirely by May 1. But if less extreme models have been done, they were not presented last night.

In walking the public through the more dire of the two projections — the one that would see hospitals overflowing this summer without enough ventilators and ICU beds to treat the hundreds of people who need them and 188 people having already died of the disease — Ennis underscored that without restrictions, the model indicates the local health system would be completely overwhelmed within months.

“We don’t put this up to frighten people but this is what the data says,” he said.

Watch the full dialogue embedded below.