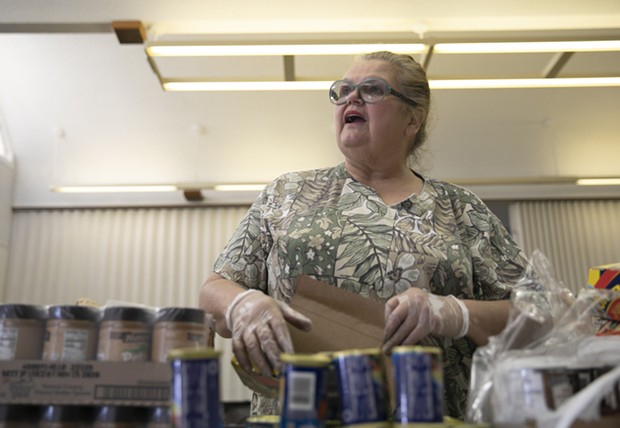 Last week Gov. Newsom announced that eligible seniors throughout California could immediately get three free restaurant meals per day delivered to their door.

Yet a week later, not a single meal has been delivered, and tens of thousands of Californians who have tried to sign up have been left disappointed, confused and maybe even hungry.

During his press conference last Friday, Newsom said counties and cities were ready, but in reality, most were caught off-guard: Most didn’t know that such a program was under consideration. Now they are scrambling to identify restaurants and eligible seniors before federal funding runs out on May 10.

It’s the latest example of how Newsom has announced an ambitious coronavirus response plan before details were hammered out and, in this case, even before the agencies recruited to carry it out were notified.

Under the governor’s plan, the Federal Emergency Management Agency will reimburse 75 percent of the cost of the meals, which would cost up to $66 per person for three meals per day. The state will cover another 18.75 percent. That leaves about six cents out of every dollar to be paid by cities and counties.

Of California’s 5.7 million seniors, about 2.4 million might qualify for the program, according to UCLA’s California Health Interview Survey. If half of them enrolled, the total federal, state and local costs could reach more than two billion dollars per month.


To be eligible for the free meals, seniors 65 and older have to meet certain income qualifications, and people between 60 and 65 also qualify if they are at high risk or provide proof they were exposed.

Cities contacted by CalMatters, including Los Angeles and San Francisco, declined to say when they will be able to start the deliveries to seniors.
Cash-strapped cities and counties

In cash-strapped cities and counties, officials said they are reluctant to sign up without knowing how soon they’ll be reimbursed and whether funding will last past May 10.

Mariposa County Human Services Department Director Chevon Kothari learned about the program for the first time while watching Newsom’s press conference a week ago. Now her county, on track to burn through 70 percent of budget reserves by July with hotel and sales tax revenue from Yosemite Valley ground to a halt, is leaning against offering the meals to seniors. At least two other rural counties are in the same situation, Kothari said.

“This may be a really good thing for communities who can afford to front the costs and risk not getting that reimbursement, but for communities who don’t have the wiggle room to part with those funds, it could be too much risk,” said Kothari. She added that her agency is meeting the food needs of seniors in other ways.

If a city or county has, for instance, 10,000 seniors participating, the local government’s portion of the cost of the meals would exceed $1.2 million per month.

Los Angeles County has about 712,000 seniors who may be eligible for the free meals. So it’s portion could be $88 million per month. For the state and federal government, that cost could reach $1.3 billion per month.

Some representatives of cities and counties across the state, who learned about the program at the same time as their residents, expressed frustration that Newsom saddled local governments with immediately delivering on his big promises to hungry seniors, but provided little guidance.

But they were hesitant to publicly criticize the governor in light of their cries for help from the state to address looming budget deficits driven by the epidemic that have already led to employee furloughs.

One representative from a statewide association of local agencies called this Newsom’s “modus operandi” during the coronavirus pandemic.

“There’s these great ideas about starting different initiatives whether it be this program or others, and it seems like the governor always announced it before it probably should be talked about or before the details are worked out,” said the representative, who asked not to be identified because the organization wanted to stay in the administration’s good graces.

However, state and county leaders commended Newsom for paying attention to the need for food assistance among vulnerable seniors who fall through the cracks of other programs.

“It’s absolutely a good thing,” said Frank Mecca, executive director of the County Welfare Directors Association. “We expect to engage post haste with the administration about the specifics for launching.”

During his Facebook Live announcement, Newsom said “this program goes into effect immediately,” and he urged seniors to call 211 to sign up.

And they took him up on it. Operators at Interface Children and Family Services, which fields 211 calls from 40 counties that cover almost half of Californians, said more than 7,000 people called right after Newsom’s announcement — a spike from the weekly average of 10,000 calls.

“We were telling them we didn’t have further information,” said Kelly Brown, director of the call center. “That’s what we’re continuing to do now.”
Brown said that only Monterey and Sonoma counties have a sign-up process in place.

Here’s how the meal program is supposed to work:

Local governments pay restaurants up to $66 to cook and deliver three nutritious meals per day to seniors 65 years and older who can’t currently prepare or obtain meals. People between the ages of 60 and 65 also qualify if they are considered high risk because of health conditions or have been exposed to the virus.

They also must live alone or with another qualifying senior. They can’t already receive other federal nutrition programs like food stamps or Meals on Wheels, and they must earn less than $74,940 for a household of one or $101,460 for a household of two.

“Even if it’s hundreds of thousands that take advantage of this, just in weeks you’ll see millions and millions of meals part of this program,” Newsom said.

Newsom touted it as a win-win-win, sending much-needed dollars to struggling restaurants, filling an urgent need to feed people scared to leave their homes and generating tax revenue for cities.

Newsom said he expected that the sales tax that the cities will collect from the meals will “should more than offset the local costs.”

Restaurants are eager to jump on board, said Jot Condie, president and CEO of the California Restaurant Association.

“As soon as the governor announced this creative new program, we received a flood of emails and phone calls from restaurateurs wanting to take part,” Condie said.

Several large cities expressed enthusiasm. San Francisco has already contracted with a food truck network to cook 10,000 meals for people under medical quarantine and has begun to recruit more restaurants, said a spokeswoman. The Los Angeles County Department of Workforce Development, Aging and Community Services said it is “ramping up quickly.”

Funding questions could be deal-breaker

Newsom called the program “a real opportunity for rural California as well.”

But small and rural counties facing precipitous drops in revenue may find it difficult to muster even the 6% costs, let alone fronting 100% and waiting to be reimbursed, said Paul Smith, vice president of governmental affairs for Rural County Representatives of California.

After several recent disasters in Mariposa, Kothari said she’s learned that FEMA often takes 12 to 24 months to reimburse, if at all.

“If you don’t document (spending) just in the way they (FEMA) need it documented… you could risk not getting that back,” Kothari said. That’s not a risk many localities can take, she said, especially given the administrative burden for counties with small staff and vulnerable residents so spread out that they might live an hour away from the nearest restaurant.

Asked about the timeline for reimbursement and the local costs, Newsom acknowledged that the program could be “anxiety inducing” for cities and counties. But, he said, as “a former mayor, it would have been music to my ears to hear a program costing about 6 cents” for every dollar.

Expedited reimbursement for half of the federal funding may be available upfront for localities that apply for it, said Governor’s Office of Emergency Services spokesman Brian Ferguson.

“If we can put food in the belly of even one vulnerable person, it’s something worth doing,” Ferguson said.

Another red flag for some localities: the meal program funding will expire soon unless FEMA grants an extension.

According to a state document for local officials, the funding runs out on May 10, “unless the public health need ends sooner or an extension is granted by FEMA…. While it is anticipated that, upon successful program execution, the State will request an extension, there is no guarantee it will be granted.”

Newsom did not respond to a CalMatters’ question at his Wednesday press conference about the May 10 deadline.

“By the time I get this set up and start to provide services and socialize it with my community… is the program going to come to an end?” Kothari asked.

Jackie Botts is a reporter with CalMatters. This article is part of The California Divide, a collaboration among newsrooms examining income inequity and economic survival in California.