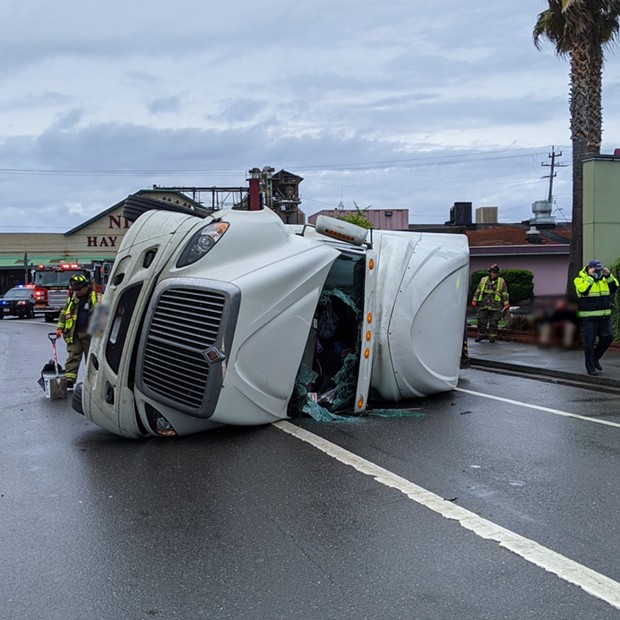 Broadway is closed at Seventh Street after a traffic collision needing extrication occurred at 11:50 a.m. A tractor truck and trailer is on its side at the foot of Fifth Street.

The Incident Commander reported over the scanner at noon that the patient has been extricated and sent to the hospital via ambulance. According to a Humboldt Bay Fire release, the driver suffered minor injuries and was treated at the scene.

Traffic is still impacted so please avoid the area.

UPDATE 12:13 p.m.: The northbound lanes are closed by Leon’s and traffic is being detoured. The southbound lanes have narrowed to one lane.

On Wednesday, May 13, at 11:50 a.m. Humboldt Bay Fire crews responded to a call for an extrication at the corner of 5th and Broadway Streets for a driver trapped in an overturned 18-wheeler.

Upon arrival, bystanders were attempting to help the driver whose door was now pinned to the road. Fire, EMS, and bystanders were able to extricate the driver through the broken windshield. The driver sustained minor injuries and was treated on-scene by City Ambulance, refusing further treatment or transport to the hospital.

Humboldt Bay Fire deployed Hydrocarbon booms to mitigate any risk of leaking material from the vehicle or its contents, although no such leaks occurred. The material inside of the vehicle is safe and poses no personal or environmental threat at this time. Crews are actively working to right the overturned vehicle and remove it from the roadway, though members of the public can expect this stretch of 5th Street to be closed for some time until that occurs.

Thank you to Eureka Police Department and City Ambulance personnel for their assistance on scene. Humboldt Bay Fire would like to remind the public to remain extra vigilant on the road during these initial Spring rains as roads are very slick, especially around turns.