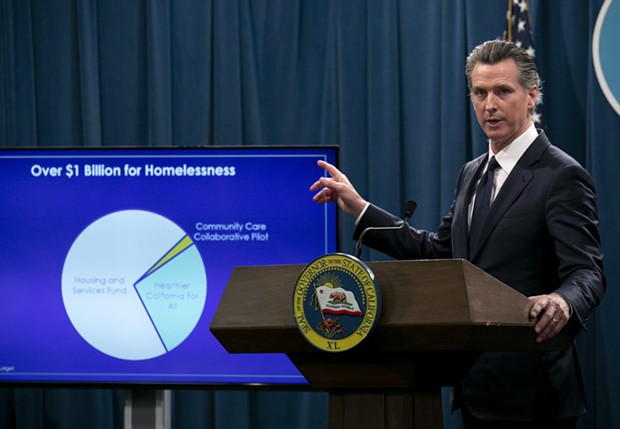 Gov. Gavin Newsom revised California’s budget down to $203 billion Thursday as the coronavirus pandemic batters the state with record job losses and shortfalls. In charting out a plan to fill a huge deficit, the Democratic governor strategically tied much of the cuts to public health, public safety and public schools to additional federal stimulus aid.

“These unemployment numbers, the economic consequences of COVID-19, are not only being felt statistically, but they haven’t been felt like this since the Great Depression,” Newsom said. “These are not normal numbers.”

In trying to bridge a $54 billion deficit, he said, Congress could wield great power to stave off painful cuts to schools, health care and safety-net programs at a time when people need those services most. The Democratic governor also aimed his gaze at the Trump administration— announced a list of so-called trigger cuts that would happen absent additional federal support.

• California’s K-12 and community college budgets will drop $19 billion under the state’s minimum-funding guarantee, setting back years of striving to reach adequate funding. The governor announced a 10 percent cut to the state’s school funding formula, which has aimed to channel extra dollars to districts with more disadvantaged students. The reduction includes a loss of a 2.31 percent cost-of-living increase districts rely on for purchasing goods and services.

• Newsom said he won’t roll back tax credits for working families and will maintain cash payments for working parents participating in CalWORKS, the state’s welfare-to-work program. However, there will be cuts to CalWORKS employment support and child care.

• A 7 percent cut in the number of hours seniors and disabled people receive through the state’s In-Home Supportive Services program.

• The state would negotiate a 10 percent salary reduction with state worker unions for a $1.2 billion general fund savings.

In addition, the Newsom administration walked back many of its more expansive January proposals. For example, the governor is declining a plan to extend Medi-Cal health coverage to eligible undocumented seniors over 65 — and he will likely face resistance from some legislative Democrats hoping to support a community more vulnerable to the virus. Now that Newsom has put out his plan, lawmakers have until June 15 to pass a balanced budget.

The crisis, however, appears to present opportunities for Newsom. He had proposed closing one prison in the next five years. Now he wants to close two prisons, one in 2021 and another in 2022.

Even before Newsom’s revised spending plan was released publicly, union leaders began warning members they would have to share the pain. The Sacramento Bee reported the state’s largest public employee union warned its 100,000 nurses, custodians, IT workers and office staff that they could face two furlough days a month.

California finance officials first revealed the $54 billion deficit last week, and painted a bleak picture of how badly the coronavirus pandemic damaged the fifth-largest economy in the world.

The Newsom administration projects 24.5 percent unemployment, a 21 percent decline in new housing permits and a nearly 9 percent drop in California personal income for the fiscal year starting July 1. That’s a stark turnaround from January, when the governor laid out an ambitious agenda featuring a $5.6 billion surplus.

Newsom acknowledged all of that has disappeared “in a blink of an eye.”
Broadly, the administration called for bridging the deficit by canceling non-essential spending, tapping reserves and borrowing. Newsom’s proposals include:

• Canceling $6.1 billion in program expansions and spending increases, including canceling or reducing a number of one-time expenditures contained in the 2019 Budget Act. This includes stopping a $2.4 billion extra payment to the California Public Employees’ Retirement System.

• Moving $4.1 billion between accounts to help balance the budget, on paper at least.

• Temporarily suspending and capping tax credits used by businesses and wealthy taxpayers. Specifically, suspend net operating losses and limit to $5 million the amount a taxpayer can claim in credits in any given tax year. The move would generate $4.4 billion in 2020-21 to increase funding for schools and community colleges and maintain other core services.

• Joining other states in requesting $1 trillion in flexible federal funds to support all 50 states.

He said the cuts, while painful, don’t compare to the suffering many California families are experiencing.

“As painful as the state’s budget might be, personal budgets for so many of you watching are even more devastating,” Newsom said. “You’ve exhausted your savings, your credit has been completely destroyed.”

Up until the coronavirus outbreak, California had enjoyed the longest economic recovery since the Great Recession. It had managed its finances prudently in good years, paying off a $35 billion “wall of debt” from internal borrowing schemes and building up significant reserves — all of which helped improve the state’s credit rating.

Still, public employee pensions have since reported record losses. That has local officials fearful of service cuts, layoffs and even bankruptcy because state and local governments are obligated to contribute more — even when they have less. CalPERS, for example, shed $69 billion as the global financial market recoiled from the pandemic.

And former Gov. Jerry Brown, a doomsayer who paddled right of many legislative Democrats in seeking fiscal restraint throughout his second tenure, warned in his final state budget in 2018 that the good times wouldn’t last forever.

“What’s out there is darkness, uncertainty, decline and recession,” Brown said. “So good luck, baby!”

California is pinning a lot on Washington, D.C. Newsom said despite the state’s savings, the projected deficit is three and a half times a $16 billion rainy day fund and nearly 37 percent of the state’s general fund.

Newsom said he would draw down the rainy day fund over three years because he expects multi-year deficits. He added that cuts could be stopped if the federal government steps in.

“The president of the United States with a stroke of the pen could provide support for Nancy Pelosi’s new HEROES Act and these cuts could be eliminated,” Newsom said.

California could look to its residents as well, though it’s unclear whether voters will be in a mood to help.