May 17, 2020
comment
According to a press release from Access Humboldt, the Klamath River Rural Broadband Initiative was awarded more than $10 million of supplemental funding from the California Advanced Services Fund for completion of a fiber optic telecommunications project in Humboldt County. The KRRBI project was initially granted CASF support in 2013. 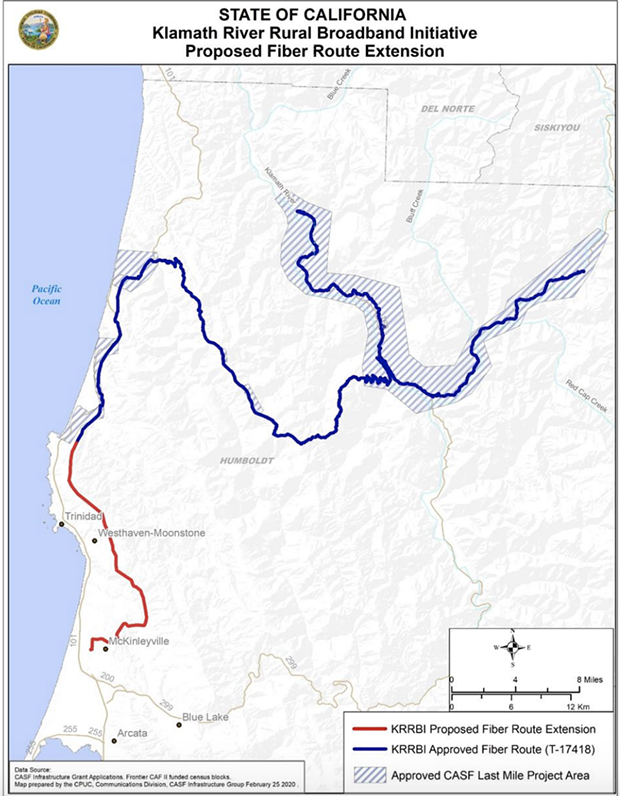 
On May 14, 2020 California Public Utilities Commission published notice of funding approval for $10.8 Million dollars of supplemental funding from the California Advanced Services Fund (CASF) to the Karuk Tribe for completion of a fiber optic telecommunications project in Humboldt County. CPUC Notice is online here: http://docs.cpuc.ca.gov/SearchRes.aspx?docformat=ALL&DocID=337051399

The Karuk Tribe is partnering with the Yurok Tribe to develop the Klamath River Rural Broadband Initiative (KRRBI) that will build and operate the fiber network between Orleans (Panamnik) and McKinleyville, via Weitchpec and Orick. Karuk Tribe already operates an Internet service in Orleans with fiber connections upriver operated by Sisqtel. And the Yurok Tribe operates broadband services on their lands via wireless networks from Weitchpec to Klamath to Crescent City where interconnections are made. The KRRBI project was initially granted CASF support in 2013.

Responding to the CPUC's published Notice on May 14, 2020, Sean Taketa McLaughlin, executive director for Access Humboldt released this statement:

"Access Humboldt offers respect and congratulations to the Karuk Tribe and Yurok Tribe in their successful application for California Advanced Services Fund support. The Klamath River Rural Broadband Initiative is an essential and important communications link that will bring service to some of our region's least connected areas, and the project will also benefit the wider region for future generations. We know this visionary project, with local ownership and governance, is a monumental undertaking, so we extend our gratitude to those who are making it happen. And we look forward to supporting next steps and celebrating future milestones."