COVID-19 Could Yield a Kitten Boom or Bust

Will higher-than-normal adoption rates keep up with kitten season?

May 21, 2020
comment
“It’s hard, but it’s really very beautiful right now,” says Kim Class, director of the Companion Animal Foundation. “People are home and they want to foster. We might not have enough kitties this year.”

Companion Animal Foundation is one of several local animal rescue organizations responding to an unprecedented year for the sector. While the closure of thrift stores that support nonprofit agencies and the uncertain economic future of the region pose challenges, adoption rates have remained strong. 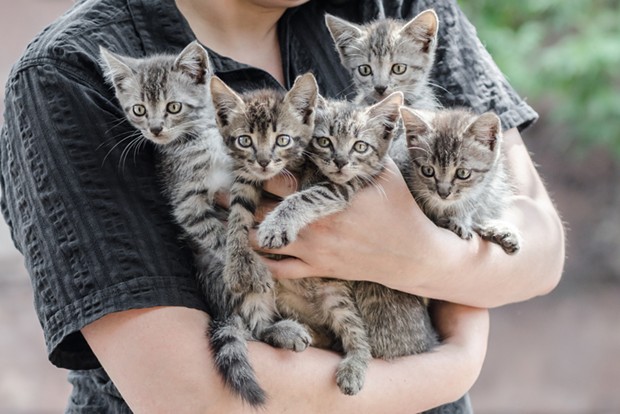 “We’ve seen an increase in people applying,” says Tara Cervantes of the Sequoia Humane Society. “Because we now have to make appointments for social distancing, it went down a little bit last month because it takes a little bit longer than our normal process, but I think we’re going to see it jump this month.”

[jump] Both Class and Cervantes attribute an increase in adoption rates to the impact of shelter in place. More people are home and have time to nurture a new member of the family, whether it’s through adoption or foster care. Plus, says Cervantes, adopting and/or fostering is an easy way to help support the shelters.

Sequoia Humane Society has created a “curbside” adoption process, scheduling appointments for applicants and bringing dogs to the outside enclosure. Visitors to the kitten area need to be gloved and masked. The Companion Animal Foundation is also allowing visitors by appointment only, with both organizations sanitizing everything — pens, clipboards, carriers — after use.

Class’s prediction of a kitten shortage may be tested, as at least one other organization is anticipating a surge in felines needing good homes.

Jennifer Raymond, director of the Humboldt Spay Neuter Network, is anxiously awaiting the day her organization can resume normal services, tentatively predicted to be the end of June. By that time, there could be many litters on the way.

“The California Veterinary Medical Board determined that spaying and neutering was not essential,” says Raymond. “It’s considered to be elective surgery.”

Some clinics are currently offering spay-neuter services in emergency circumstances. The Humboldt Spay Neuter Network, however, is in a unique position because its services are grant-supported and the reduced rates for spay-neuter services mean a higher volume of public interaction. Raymond’s team chose to reduce risk of exposure to COVID-19 for staff members and suspend its services in early April, closing the clinic to the public. While the team has still done some work with feral cat colonies, many potential clients who rely on the Spay Neuter Network’s low-cost services are in the lurch.

“I think we’re going to have one heck of a kitten season because of it,” says Raymond. “We were going strong up through the end of March, we were booked out at least a month in advance and looking at a really busy year.”

In a normal spring, Raymond’s team would spay an average of 25 cats per day. She says people often don’t anticipate the consequences of delaying a spay for kittens, who can come into heat as early as four months old and during adolescence will cycle through fertility at an average of every two weeks.

“I’m going to say that there will be a population explosion this year,” says Raymond. She is using the downtime prior to reopening to write grants, hoping to offer a special $10 spay offer for new kitten owners.

Currently the Humboldt Spay Neuter Network is living off its reserves as it has “virtually no income.” Finding childcare for staff will be a challenge upon reopening; most of the nonprofit’s staff has also been furloughed for the interim. Class, at the Companion Animal Foundation, said that some of its staff has also chosen not to return to work due to concerns about community spread of COVID-19.

Raymond and her remaining staff have put a lot of thought into their reopening plan, creating a system for clients to park in the lot, fill out paperwork and leave it on top of their pet carriers so they don’t have to enter the building. The clinic is already roomy enough to allow staff to work 6 feet apart.

“We’ve had time to think about it,” says Raymond, laughing.