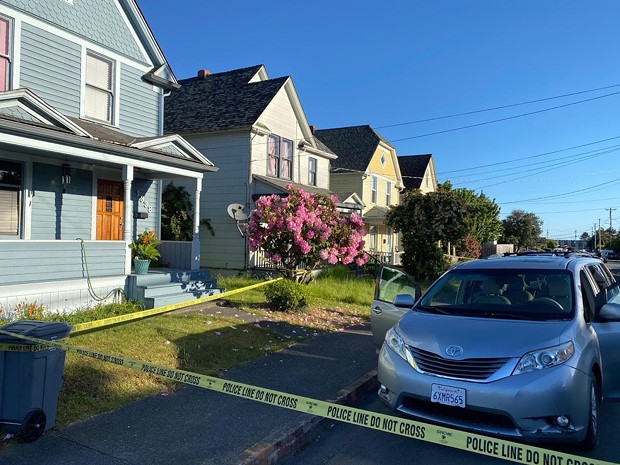 UPDATE:
According to a press release from the Eureka Police Department, the fatal shooting this morning appeared to have been an act of self defense. See the full press release copied below our original post.

PREVIOUSLY:
This morning about 2:45 a.m., two people were shot in the 1300 block of West Avenue near 14th Street in Eureka, according to reports over the scanner.

Eureka Police Chief Steve Watson replied to a request for information by stating, “It is my preliminary understanding we have one deceased male, a second wounded and being treated and no outstanding suspects but I stress this is very preliminary.”

He promised more information by noon.


According to the scanner, EPD officers backed by CHP and HCSO officers rushed to the scene of the shooting immediately after the first report.

Almost as soon as they arrived, CPR was being performed on one person, according to the incident commander speaking over the radio. He added that the second person had a moderate gunshot wound

Six people were detained including one juvenile as officers determined what had occurred.

A roadblock was put up on West Avenue as officers investigated the scene.

Editor's note: This story has been updated with additional information from Watson. On May 22nd 2020, at approximately 2:40 a.m., officers from the Eureka Police Department were dispatched to the 1300 block of West Avenue on a report of multiple subjects involved in an altercation. During the altercation, an occupant of a nearby residence confronted the subjects from his porch and advised them to leave the area. The subjects then confronted the resident and became hostile toward him and entered onto his property. The resident attempted to use pepper spray to deter the subjects, with no success, as he entered back into his home. At least one subject entered the residence and attempted to assault the resident. During the altercation inside the home, the resident fired multiple shots from a handgun, which he had retrieved from inside the residence, striking the subject who was assaulting him. This subject was pronounced deceased at the scene. A second subject, who was on the porch, was struck in the leg by gunfire. This subject was transported to St. Joseph Hospital for treatment. This injury is believed to be non-life-threatening. Officers were able to locate and detain everyone who was involved at the scene, including the shooter. The individuals involved in this incident were unknown to one another.

EPD Detectives responded to the scene, along with Evidence Technicians, and took over the investigation, which is still ongoing.

At this point in the investigation, Detectives have completed their interviews with everyone who was on scene and involved. After completing the interviews and upon initial review of the evidence at the scene, the shooting appears to have been done in self-defense. The Lead Detectives have conferred with the District Attorney’s Office and based on the investigation no arrest will be made at this time. The completed report will be forwarded to the District Attorney’s Office for review.

EPD would like to thank the Humboldt County Sheriff’s Department and the California Highway Patrol for their assistance with this investigation.

If anyone has any information concerning this investigation you are asked to contact Detective Sergeant Terry Liles at tliles@ci.eureka.ca.gov.