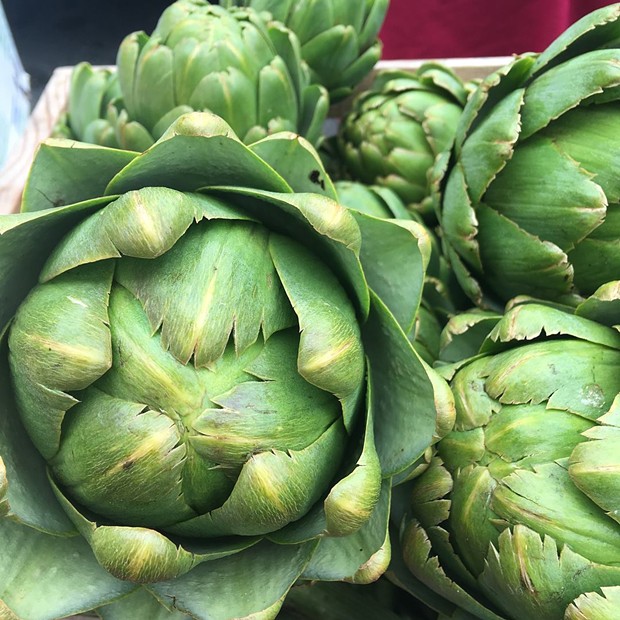 The produce season is hitting some early hurdles due to COVID-19. With the Arcata, Garberville, Shelter Cove and Miranda farmers’ markets now open for business, and several others (Henderson Center, Fortuna) due to open in June, farmers and organizers are struggling with adhering to new protocols while keeping safe and trying to make a profit.

“I don’t resent the rules, I’m just learning to live with them,” says Holly Kreb of Floodplain Produce in Pepperwood. She and her husband Mel are adjusting to the double whammy of reduced tourist traffic along Avenue of the Giants, where they have their farmstand, and canceled reservations for their vacation rental unit. Normally the Krebs pay someone to work their stand but this year they’re contemplating moving to an honor system for payment or greatly reduced hours.

"It’s a huge unknown,” says Kreb. “We can’t afford to have anyone in the stand when we won’t have customers.”

Floodplain Produce is also one of hundreds of local family farms that rely on the farmers’ market system to get produce to the public, and the Krebs are contemplating how they’ll meet public need while ensuring public safety. While normally Mel runs the booth alone, this year they will need two hands on deck, so one person can handle the money and the other the produce. It’s going to be hot weather to be wearing masks for hours at a time, and the general character of the markets is going to be vastly different than usual.

“Farmers' market, a lot of people go because it’s a social event, and being social is discouraged right now,” says Kreb. “My friend sells lotions, herbal stuff and now people can’t smell it, can’t feel it. It’s putting a real crimp in the market.”

She reiterates that she doesn’t resent the rules. The Krebs are both in what is considered a vulnerable age bracket for COVID-19 transmission, and Holly is a cancer survivor.

For some farmers, the pandemic has created a new crop of consumers eager to buy food with a shorter trip from farm to buyer than that of grocery stores. Farms offering CSA, or Community Supported Agriculture, boxes, have experienced a surge in subscribers.

Redwood Roots Farm, in Bayside, saw a jump in shareholders for its spring and summer season, selling out quickly. The farm relies exclusively on CSA sales, with shareholders picking up their shares at the farm and also taking advantage of a “you pick” system that allows them to wander through the fields. Owner Janet Czarnecki is optimistc, although she say she doesn’t quite know how they will adjust to the summer rush, which is almost triple that of their spring customers, now that all the shares will have to be pre-boxed instead of allowing customers to choose (and handle) their own vegetables.

“We’ll have to add that to an 11-hour day and I’m not sure yet how it’s going to work,” she says, admitting that it’s stressful. “It’s not as stressful as not having a job! I’m really, really, really thankful I can work.”

She says greeting customers at the farm has been socially beneficial for both her and the shareholders, adding that for some it’s now “their social outing of the week.”

Laura Hughes, director of market operations for the North Coast Grower’s Association, has been helping members of the NCGA adjust to changing times by developing a member directory of alternative sales outlets, creating a CSA-style multi-farm produce box that folks who are high-risk or immuno-compromised can order online and pick up directly at the market, and giving guidance to farmers who need to transition from in-person to online transactions.

“What we see on the ground is that because of some of the larger failures of institutional organizations, those disruptions in larger scale institutions are having a beneficial impact for local farmers,” she says. “Consumers are coming to farmers markets and CSAs. Attendance is lower at farmers' markets but people are buying more. Some farmers are selling out. There’s a spike in interest and that’s serving our farmers well.”

Hughes adds that because it’s still early in the season there’s not a glut in produce, meaning that currently demand exceeds supply. Farmers are worried that later in the season they may have more produce they can sell, especially with reduced demand from restaurants and limitations on how many people can shop at local markets.

A limitation of one person per household to shop at the farmer’s market in Arcata is just one of several safety measures the NCGA has put into place for this popular weekly event, and while Hughes says the reception has been nearly universally positive, there has been some resistance from farmers and shoppers alike.

“A lot of farmers, while they’re complying, some feel like we’re overreacting,” she says, adding that some have asked for exemptions or have chosen not to come to market, either because they find the safety regulations onerous or they are concerned for their own health.

Patrons of the Arcata Farmers’ Market have also had a mixed reaction to new regulations, such as not being able to handle produce, a restriction on stopping to eat during the market and being asked not to loiter or linger on sidewalks. Farmers’ markets occupy a unique space in a society struggling to adjust to the COVID-19 pandemic: They are essential services that happen in public spaces and normally serve as social gatherings. Hughes is less concerned about small neighborhood markets, which are often held on weekdays and usually attract smaller crowds, but the Saturday Arcata Farmers’ Market, with its traditionally high attendance and social atmosphere, is already proving to be a challenge for the nonprofit’s small staff.

“For the most part we’ve received overwhelming support, with people saying, 'Thank you for doing this, for being open,’” says Hughes. “We’ve done a lot to add infrastructure, not allowing people to congregate on sidewalk and using little marker flags with signs, to demarcate where people can stand in line. We’re not allowing people to enter the market in between booths. It takes a lot of extra staff time to set up.”

A small number of people, Hughes said, have been calling on even more stringent safety measures, such as erecting a fence around the plaza during the market. And Hughes and her staff, placed in the position of enforcing public safety during the event, have been on the receiving end of some vitriol.

“I got called a fascist last week for asking someone to step off the sidewalk,” says Hughes. “It’s hard because it’s a public space. It’s hard for people to unlearn this community vibe that’s developed over the years. We’re trying to get people to be as efficient as possible and get out so other people can come in. That message is being less and less effective as people are becoming exhausted with the shelter in place.”

Hughes expressed some frustration with the Arcata Police Department over enforcement of social distancing during the event, saying that some law enforcement agencies have been taking a “back seat” approach to enforcement during the pandemic, which she attributed to optics.

APD Lt. Todd Dokweiler maintains that his agency has had officers at the market as it would any normal year and complimented the steps the NCGA has taken to implement “all the required and necessary steps for social distancing.”

“We are trying to gain voluntary compliance,” he said of the mask order. “To my knowledge it was not passed on, that they’re looking for additional support. I understand the difficulty — someone who is a member of the NCGA, they’re not going to get the same response that an officer would. That’s really something we can assist with and are willing to assist with, and have been [assisting with]. Up to now we haven’t encountered people who are unwilling to comply. Not everybody is excited about it, but they’ve complied.”

Looking ahead to the (much smaller) farmers’ markets in Eureka, Eureka Police Chief Steve Watson responded to a query with a statement saying, in part, that EPD captains review all special event permit applications in their respective service areas and assess them for safety issues along with other city departments. If EPD receives complaints about social distancing and masking practices not being observed to a serious extent, they will respond and assess the situation, with “serious and pervasive violations” potentially resulting in the event permit being temporarily revoked.

Watson did not seem to anticipate that serious step being taken, as the NCGA has worked to be compliant with the shelter-in-place order and the markets themselves are held outside and of “modest size.”