Floyd died after a white officer Derek Chauvin of the Minneapolis Police Department knelt on his neck for more than eight minutes during an arrest. In a recording of the altercation by a bystander, Floyd is heard saying that he can't breathe, which is similar to the death of Eric Garner, who died from a chokehold applied by a New York Police Officer in 2014. Floyd's death has sparked many protests around the U.S. demanding justice against police brutality against people of color, but especially of black people. 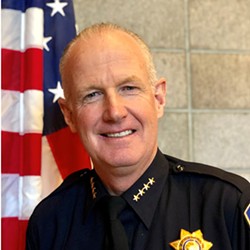 In an email to all employees at the Arcata Police Department, Ahearn writes "Chief [Steve] Watson [of Eureka Police] and I have both received inquiries from community members to make a statement regarding the death of George Floyd in Minneapolis.  ... This email is not intended to discuss in-depth what should be said, how it should be said and the risks of saying anything publically.  However, this is an opportunity to make a statement of how hate is not tolerated in Humboldt County."

In a Facebook post, Eureka Police Chief Watson wrote that he, like other law enforcement officers across the nation, is "deeply disturbed and outraged by what I saw in the video of George Floyd’s death on Monday while in the custody of Minneapolis police officers. ... What that video depicts is counter to how we train and what the badge represents. Policing must be fair, impartial and just always, without exception."

Ahearn and Watson are asking community members who wish to stand together and condemn police brutality against people of color to join them in front of the Eureka Police Department on Monday, June 1 at 1 p.m.

Honsal wrote in a Facebook post, "It makes me sick to my stomach to see what has happened. ...  I am thankful that the former Law Enforcement Officer will be held accountable and will have to answer for his actions in court. ... There is NO Room for racism or hatred in our world. Black, Brown, Asian or White ... hating someone because of the color of their skin is wrong and it cannot be tolerated."

Read the sheriff's and chief's full Facebook posts and letters below.


Subject: Make A Statement-This Monday
Good Morning All; Chief [Steve] Watson [of Eureka Police] and I have both received inquiries from community members to make a statement regarding the death of George Floyd in Minneapolis. his is a complicated request for Chiefs and the Sheriff and this email is not intended to discuss in depth what should be said, how it should be said and the risks of saying anything publically. However, this is an opportunity to make a statement of how hate is not tolerated in Humboldt County.

You may recall the Humboldt County Human Rights Commission’s presentation to LECAH regarding their #humboldtkindness campaign. This is an opportunity to perhaps incorporate that message into our statement.

Chief Watson and I are inviting all of you and all community members to the front of the Eureka Police Department this Monday at 1300 hours to make a statement as a community of how every life is valued. No press release is intended to be sent. We will simply agree on a message, have someone videotape it and send it to all who are present to then post to their social media accounts. Should take only a few minutes.

Hope to see you all on Monday.
Brian

Hello APD; Community members are calling upon law enforcement leaders to denounce the death of George Floyd while in the custody of Minneapolis PD. The video shown in the news is troubling in a number of respects. People expect answers and they expect answers now. To delay comment until the investigation is completed is no longer acceptable. Chiefs and Sheriffs have to find a way to communicate and take a stand on what is known at the time.

Policing must be delivered in a just manner; at all times. There are no exceptions. Compassion must rule and all human life must be valued and protected.

Chief Watson and I are inviting all of you to the below event this Monday if your schedule will allow you to attend. There is no compensation for attending other than the satisfaction of knowing you came together as a law enforcement community with other community members to make a statement of how Humboldt County values all life and all people, all of the time.

What are we willing to do as a Police Department to change the course of Policing so that all people can live in peace and not feel threatened or frightened by law enforcement officers?

I am asking you APD to step up and answer the call. Be a leader. Set the example. Do not sit back and watch an unjust application of force take place or tolerate inequality or discriminatory conduct towards a person of color or anyone who is being treated differently because of who they are. Take risk. Do the right thing. Intervene. Always. There are no exceptions. Serve with honor For all people.

Thank you APD for your humble service to our City.
Brian