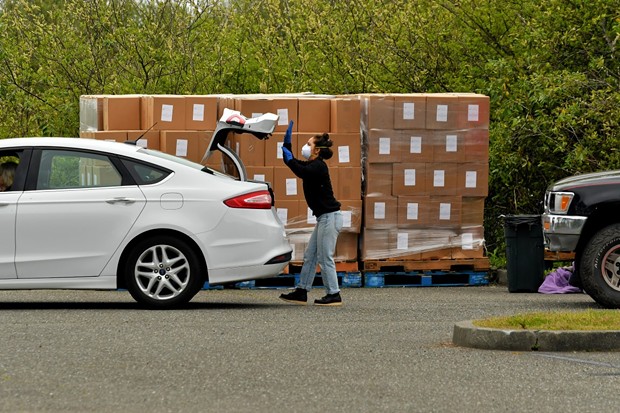 Can we feed ourselves? This is a question the staff of the Humboldt Food Policy Council (a branch of the larger California organization) has been asking since 2012. Now, with COVID-19 crimping the distribution chain for larger grocery stores and more local residents going hungry due to economic losses, the question seems more important than ever. The answer is complicated.

“It’s been a big question for a while,” says May Patino, HFPC coordinator. “Do we have enough food to sustain the people who live in this region? The reality is we don’t actually know.”

In 2018, the California Department of Public Health released a study revealing that roughly one quarter of Humboldt County children experience food insecurity. Food deserts – census tracts where residents live more than 10 miles from a major grocery store or have little access to transportation to get to fresh food – are one cause of food insecurity. Humboldt County has 10 such census tracts (out of 31 total).

HFPC recently received a grant from the Humboldt Area Foundation to create an emergency food system response that would help pool and share distribution among different organizations. (Full disclosure: I am employed part-time by HAF.) One model under consideration would use a central and satellite hubs for distribution – a place where farmers, for example, could bring product that would be repackaged and redistributed at scale to need.

“We’re hoping this will turn into something that will be adapted and can be reactivated in emergency food situations,” says Patino “We would like to increase some long term food sustainability systems in the region.”

The North Coast Grower’s Association has already taken steps to aggregate supply by creating the Harvest Box Program – a multi-farmer CSA that families can order through the NCGA website.

Michelle Wyler, managing director of the Farm to Market program for the Community Alliance with Family Farmers, praised the nimble response of local farmers to COVID’s challenges.

“In general, when COVID hit folks, we had to think about pivoting pretty immediately to more direct sales models,” she says.

Wyler works with farmers statewide and says the Humboldt food system had some advantages, including a well-established sales base in local farmers markets and a later start to the growing season that gave local producers more time to figure out a response. While in other parts of the state some farmers have had to scale back or dump product because they couldn’t sell it or pay for the labor to harvest product, in Humboldt farmers are maintaining or even ramping up production to meet demand.

“It’s been a resurgence for the local food market,” says Wyler, adding that another advantage is that local farmers are less reliant on restaurant or wholesale sales, and thus the restaurant industry’s nosedive due to shelter in place is not having the same ripple effects on farmers that it might in other areas of the state.

“A next step would be figuring out what product is viable locally,” says Wyler. “Local product is not going to fill demand.”

To meet demand through larger suppliers and non-local producers, the problem is again distribution. Humboldt County is often compared to an island because of its rural remove from the rest of the state and — like an island – some worry that it could be cut off from the supply chain entirely.

“We’re so dependent on food that’s coming [from] out of the area,” she says, adding that unwieldy nature of some federal relief programs has revealed the vulnerability of our isolation. “Just participating in some of the USDA programs that are related to COVID-19 relief— they don’t go through our area. They’re for Northern California and Santa Rosa is Northern California. You have to convince drivers to divert from the I-5. And then often they have to be reloaded onto a smaller truck so they can get through Richardson Grove.”

This is true, too, she says, for grocery stores and other wholesale suppliers, many of which struggled to keep ahead of product shortages in the early days of the pandemic. This bottleneck exacerbated an existing problem for small service providers, especially those in rural areas.

Bettenhausen says many smaller nonprofits, such as those that feed or house people, go to Costco or WinCo and buy what their clients need at retail prices, which is not cost effective. But most distributors have a minimum order price that is out of reach for nonprofits. A distribution hub model would be a better solution — allowing bulk purchasing that could be aggregated and then redistributed according to need. But that model comes with its own logistical challenges: cold storage, billing, moving product in and out of the facility. And then there’s the continued challenge of reaching rural areas, which would require refrigerated trucking and a sustainable financial model.

“Our food system feels precarious,” Bettenhausen says. “I personally think we need some policies at the county level addressing food policies and a system response to need. I saw the lack at the co-op when we had the planned power outage, all that food going to waste. The assumption was that those grocery stores are there to sell food but what if they can’t? The solution could be as simple as a partnership with the county to make sure grocery stores have generators.”

These supply chain issues, Bettenhausen says, have been apparent for a long time. It’s only now that they’ve become a more urgent priority.

“These are things are things we’ve known, but a lot of times because there’s no crisis, we have no momentum,” she said. COVID-19 may have changed that.

Editor's note: This story has been updated to reflect the correct number of census tracts in Humboldt County, which is 31, not 25. We apologize for the error.