UPDATE: Another Night, Another George Floyd Protest in Eureka 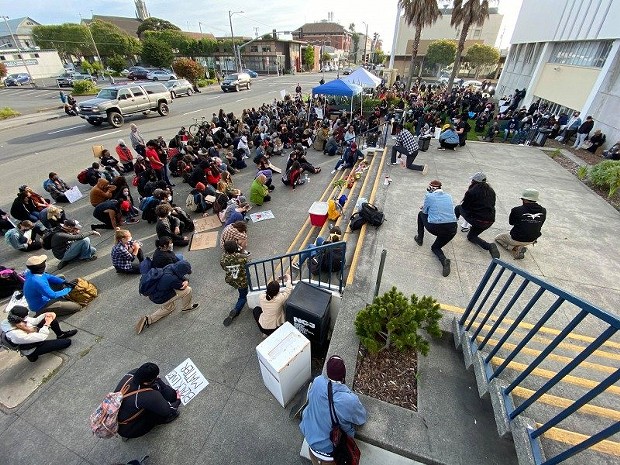 
UPDATE:
As protesters marched passed Eureka Police headquarters chanting, they were met by a powerful moment of solidarity.


PREVIOUSLY:
Protesters are gathering in Eureka tonight for a second straight day of demonstrations against police brutality, part of a nationwide movement in the wake of the death of George Floyd in Minnesota during an arrest in which a police officer kneeled on his neck for more than eight minutes.

There are currently more than 100 people gathered in front of the Humboldt County Courthouse, where protesters have taken a knee for a 10-minute moment of silence in honor of Floyd and other victims of police brutality.

Yesterday, hundreds of protesters convened and marched through the city's streets in a demonstration that was largely nonviolent, but also saw fits of violence allegedly targeting the police presence and some passing motorists as protesters marched through the streets and blocked traffic. There were also isolated reports of vandalism and graffiti. 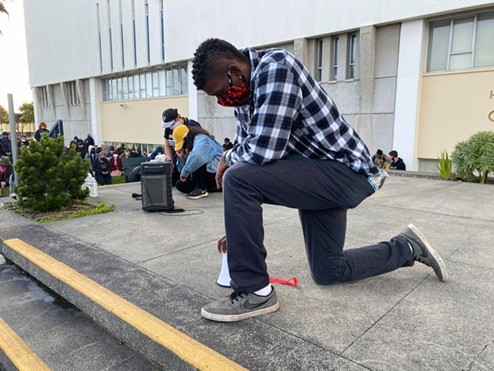 In an email to the Journal, Eureka Police Chief Steve Watson said he was on foot and had to "rescue" some responding officers in their patrol cars as protesters banged on car hoods and windows and, in two instances, broke police car windows. While some protesters alleged passing motorists sped through the crowd in acts of attempted vehicular assault, Watson said he saw some motorists encircled by protesters and felt they were trying to flee to safety through the crowd. He described a chaotic scene last night that grew increasingly on edge as the protest went on. There was also video footage of police vehicles moving through the crowd, pushing protesters, until Watson stepped in, telling the patrol cars to stop and persuading protesters to clear a path.

*This just happened today in Eureka, CA* As people came together to raise voices and shout out against racial injustice and murder... screaming the names of the many Black lives lost to our countries systemic racism and police brutality, I was shocked at how many people came out last minute for this protest. We had the highway 101 north blocked. The police were assisting in the blockades and diverting traffic. It was making an impact, conversations of new action were being had... Then all of a sudden someone had enough and apparently couldn’t stand that we were protesting Black Lives Matter and that it got in their way. The driver of a red Jeep Liberty stomped on the gas and drove straight into the crowd. We were about 20 feet away from the car as a man was on top of the hood of the car and another person was hit from what I could see... then the driver sped off down the highway, we are now waiting to see if this person will be charged with a hit-and-run attempted murder case. Sadly This person succeeded in their goal in stopping people from chanting and screaming and demanding that Black lives matter. This hatred runs deep and racism runs even deeper. Yes folks I’m glad we came together to protest but clearly it’s not enough... clearly more action needs to be taken... right when I was feeling shocked that so many people in this dominantly white area came out to speak their voices, then Boom hit with the juxtaposition of the reality that absolutely exists here, that blatant hatred & racism are rampant and alive in Humboldt County. #SilenceNoMore #UseYourWhitePrivelegeForChange #ProtectBlackLives #ItStartsWithinEachOneOfUs We are fine, I have heard that the victims are banged up but ok. But this sort of danger is real in the lives of black and brown people, this is the main point to take notice on in this post. . . . Footage taken by my husband Joel McClure please feel free to share this footage.

"There is a militant, anarchist crowd of younger people (some I suspect maybe bused here) trying to invoke violence and confrontations with police," Watson wrote in the email. "They broke windows, spray painted graffiti on businesses, our police department, patrol car, etc. Rocks were thrown, and someone was shooting a [sling shot] toward officers."

"This is our community and we have to take care of it," he said. "I won't stand for it to be destroyed."


After convening at the courthouse, some protesters marched to Eureka Police Department headquarters, where Watson and Humboldt County Sheriff William Honsal stood out front with a white board emblazoned with the message, "We stand with you against racism."