June 11, 2020
comment
A Humboldt County Superior Court judge ruled today there is sufficient evidence to hold David Bernard Anderson II to stand trial on charges he drugged and raped a 16-year-old girl in 2018, but not that he committed attempted sex trafficking.  Deputy District Attorney Stacey Eads is prosecuting the case, with local attorney Michael Acosta representing Anderson and Judge Christopher Wilson presiding. Anderson requested a trial in open court; because of COVID-19 restrictions the preliminary hearing was broadcast live on YouTube, with Anderson sitting quietly in the jury box next to a deputy and taking notes. Everyone in the courtroom wore masks. 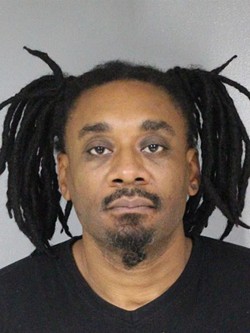 The hearing was remarkable for several reasons beyond the steps taken to prevent spread of coronavirus. The defense attorney is facing his own charges after an arrest for drug trafficking in February. Anderson was the first person in Humboldt County convicted on charges of sex trafficking — his previous conviction, in 2014, resulted in a sentence of nine years in state prison but he was released after only three due to a combination of time served and good behavior. The victim who testified against Anderson in 2014 – Elle Snow – was also 16 when she was recruited from her home in Eureka by a man she thought was her boyfriend and then forced into prostitution at a brothel in Walnut Creek. After Anderson’s conviction, she went on to found Game Over, a local nonprofit advocacy group that offered education on recognizing and preventing sex trafficking. (Snow has since left the area and could not be reached for comment.) But it was the necessity of broadcasting the trial on YouTube that has created a potential controversy with advocacy groups.


The Full Faith and Credit provision of the Violence Against Women Act prohibits any federal, state or local jurisdiction from making publicly accessible on the internet information that is likely to reveal the identity or location of someone under a protective order. But these protections must be requested by the court and in the case of the 16-year-old Jane Doe at the center of today's hearing, they were not.

Alison Kephart, Legal Director for WEAVE, a provider of crisis intervention services for survivors of domestic violence and sexual assault in Sacramento County, said that while her organization recognizes the importance of trying cases in open court when requested, for transparency and due process, having testimony that might identify a victim broadcast on YouTube — even if it isn't recorded for future viewing — is problematic and a potential violation of the provision.

“It seems to me that streaming court proceedings via the internet where the victim is protected by a Criminal Protective Order is likely to reveal the identity of a protected party, in violation of this provision,” said Kephart in a statement. “Additionally, there are several state laws that protect victims of [sexual abuse], including specific ones for minor victims. Although this is being identified as a trafficking case, it seems as though the defendant also sexually assaulted the victim directly, so I would have to think that these protections are available for the court to institute if it is asked. Notably, many of these interventions have to be affirmatively requested on behalf of the victim, usually by the DA who is prosecuting the case.”

Humboldt County District Attorney Maggie Fleming had a different interpretation, saying broadcasting preliminary hearings does not violate the Violence Against Women Act if they do not specifically link a person to a protective order.

“We avoid that by referring to victims of sexual assault and domestic violence as Jane or John Doe in all proceedings,” Fleming wrote in an email to the Journal.

Further, Fleming said that while preliminary hearings are being broadcast due to COVID-19 restrictions, her office is working to protect victims by using hearsay provisions whenever possible that allow police officers to testify on behalf of victims at this stage in criminal proceedings. Fleming said she’s also asked the county’s presiding judge and court executive officer to consider alternatives to the broadcast format, suggesting that instead the courts use closed circuit TVs, which would allow a physically distanced proceeding to take place in one courtroom with room for physically distanced public attendance in an adjacent courtroom.

“A return to courtroom trials as soon as possible would address the highly undesirable situation of having testimony by victims of a crime — especially victims of sexual assault and domestic violence — appear on YouTube,” Fleming wrote.

Regularly asking judges to clear courtrooms — or halt public broadcasts of proceedings — just isn’t feasible, Fleming said, as the law severely limits prosecutors’ ability to make such requests and if a judge were to agree, it could also create a potentially appealable issue in the case.

Although the victim was not asked to testify and was not identified by name, during Eads’ interview of the Eureka Police Department officer Timothy Marsolan the full name of the victim’s mother, the victim’s full date of birth and physical description were all entered into the record. An email and call to the district attorney’s office were not returned by press time. When asked if Marsolan's testimony as directed by Eads was iffy, Kephart said the examination was “really not trauma-informed.”

“It may be a combination of familiarity, or lack thereof, with the code sections that exist,” said Kephart, adding that an alleged trafficker requesting to try a case in open court can be a display of power and control on their part.

The fact that this case is being tried in a relatively small community increases the likelihood that small amounts of information released in an open court could endanger, intimidate or retraumatize a victim of abuse, according to Heidi Messner, director of E.P.I. (Empower. Protect. Invest.), which leads anti-trafficking education efforts in Eureka.

“Anytime that there’s that much information given, people can make an easy identification. It’s just revictimizing, honestly,” she said. “I’m always hesitant about some of those things, and where it leads, particularly when someone is underage.”

Messner added that many people don’t read beyond headlines and often jump to conclusions regarding both victims and alleged offenders.

“Especially in a small community, how we all treat each other matters,” says Messner. “It is vital.”

The details of Anderson’s alleged assault and associated charges, including his allegedly drugging the victim (he offered her a glass of water that “tasted funny,” after which she alleges she became intoxicated), forced penetration, sodomy and oral copulation, and holding the victim against her will (she reported that she told him she wanted to go, he allegedly took her clothes and her phone and stood in the door) have been reported elsewhere. The specific charges of sex trafficking were generated from an alleged exchange between the accused and the victim in which Anderson allegedly said he would “pimp her out.” During cross-examination, Acosta attempted to poke holes in EPD Detective Amber Cossetti’s investigation, indicating that according to messages exchanged on Facebook, Jane Doe had stolen marijuana from the accused and denied being raped. Acosta also alleged a racist element to the investigation, saying that the materials confiscated from Anderson’s apartment, including books and movies about “pimping and the pimping lifestyle,” were related to black culture, not sex trafficking.

Wilson said there was ultimately no probable cause for the sex trafficking charges but the court had probable cause to proceed with the other charges.

“I’m not ruling either way as to the nature of prosecution as to whether it’s vindictive or racist,” said Wilson.

The North Coat Rape Crisis Team offers free and confidential intervention, advocacy and support services to all survivors of sexual assault, as well as their families and friends, and operates a 24-hour hotline that can be reached at 445-2881.

Editor's note: This story was updated from a previous version to include comments from Humboldt County District Attorney Maggie Fleming.