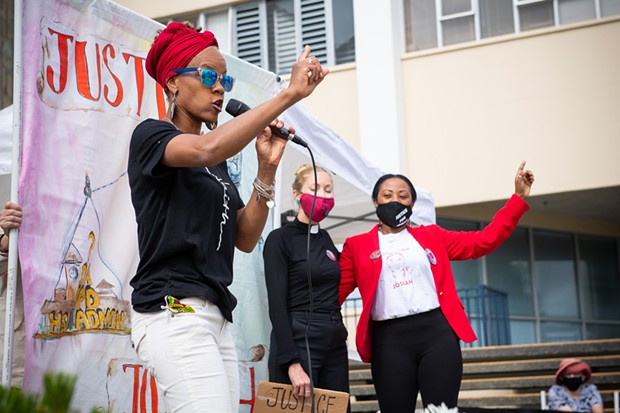 Hundreds of people gathered in front of the Humboldt County Courthouse holding signs that read Black Lives Matter, asking for justice and demanding action in the unsolved killing of David Josiah Lawson.


It has been 38 months since Lawson, a 19-year-old sophomore at Humboldt State University, was fatally stabbed April 15, 2017, at an off-campus party. Kyle Zoellner, of McKinleyville, was arrested and charged with Lawson’s murder but the case was dismissed when a Humboldt County Superior Court judge found insufficient evidence to hold Zoellner to stand trial.


In March of 2019, a criminal grand jury declined to indict anyone in connection to the case.


The investigation into the homicide has been surrounded with controversy and strife, as a detailed National Police Foundation report released earlier this year described a series of mistakes that were made by police within the first 72 hours of the stabbing.


Since her son's death, Charmaine Lawson has vowed to continue to travel 14 hours from her home in Perris, California, to Humboldt County to continue demanding justice for Josiah.


The vigil comes as hundreds of people around the nation gathered en masse in different cities to protest police brutality against black people and the death of George Floyd, who died after a Minneapolis Police Officer knelt on his neck for more than 8 minutes. The altercation was filmed and Floyd was recorded saying “I can’t breathe.”


There have also been claims of racism within Lawson’s case, as Lawson was a black man and Zoellner is white. Some protestors at past vigils and demonstrations have said that because Lawson was black, officers didn’t give him the proper life-saving measures. (While scathing in other regards, the National Police Foundation report lauded the life-saving efforts of officers' and first responders.) Others have said that the stabbing was racially motivated. Charmaine Lawson has also said in the past that if the roles were reversed her son would be in prison.


As Charmaine Lawson was opening the vigil, some cars honked in support and others spewed messages contrary to those of the attendees.


After a prayer, a recording of Dr. Martin Luther King Jr.’s “I Have a Dream” speech was played. Soon after, speakers came to the mic at the center of the courthouse steps to demand justice and change, and share their experiences in the county.


Retired HSU professor Leslie Price said he can’t imagine the pain and turmoil Charmaine Lawson has endured since her son’s death and then quoted the National Police Foundation report directly on the mistakes that were made by APD and former Chief Tom Chapman, including how little time the police department spent questioning key witnesses and potential suspects.


“Probative formal questioning of witnesses and potential suspects involved in the assaults did not occur until several days after the incident,” the report states.


Mike Fennell, who said he has been following the case since Lawson’s killing, said that District Attorney Maggie Flemming, APD and the grand jury process failed at bringing justice for Lawson.


Last year’s NAACP Eureka David Josiah Lawson Memorial Scholarship recipient Ayana Watson and her sister Amaya spoke about what it is like to live in Humboldt County as black women and their experiences with microaggressions and racism.


Black Humboldt Cofounder Mo Desir spoke about another HSU student, Cory Clark, who was found shot in his apartment in Eureka in 2001 and whose case also remains unsolved. She also spoke about how black HSU students don’t feel safe going off campus, and ended with a call to action for institutions like the university to train employees on implicit bias.


HSU Student Mireilli Román spoke about her frustrations with the lack of a meaningful response from HSU officials to Lawson’s death, which caused her to question if the school cared about his death at all.


Román also finished with a call to action, asking the university to have a zero-tolerance policy on hate speech, alluding to students seen using a racial slur in a video that circulated social media a couple of weeks ago. Román also asked for training on implicit bias for faculty and staff but also for students during the university’s orientation, drawing a comparison to how the university includes a Check-It sexual assault and sexual violence prevention presentation.


“I stand in solidarity with Charmaine,” she finished.


Throughout the vigil, a few messages were clear: speakers called for the recall of Humboldt County District Attorney Maggie Fleming and continue support of Charmaine Lawson in seeking justice for her son both through her lawsuit against the city of Arcata and through a petition for California Attorney General Xavier Becerra to take over prosecution of the case. (The Attorney General’s Office officially declined to take over the case in December, saying there was no conflict in Fleming's office.) Charmaine Lawson, however, then created the petition, which can be found here, hoping a large show of support might push it to reconsider.


“With all these amazing people giving me their strength, I’m not giving up [fighting for justice for Josiah]. So District Attorney Maggie Fleming, if you’re up there listening, just know you have a fucking hard fight on your hands,"  Charmaine Lawson said, pointing to the courthouse that houses the district attorney's office. "We’re going to drag you out of this courthouse and we're going to put someone who has integrity, and who cares for people of color and someone who’s going to do their job. We want Maggie Fleming out. Maggie Fleming must go.” 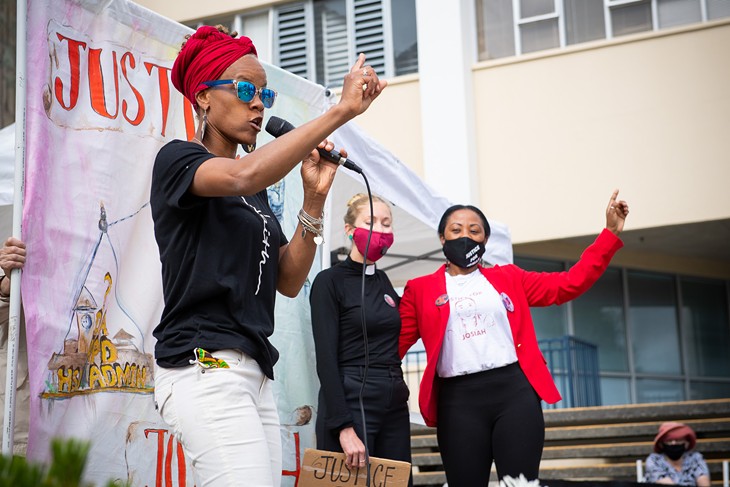 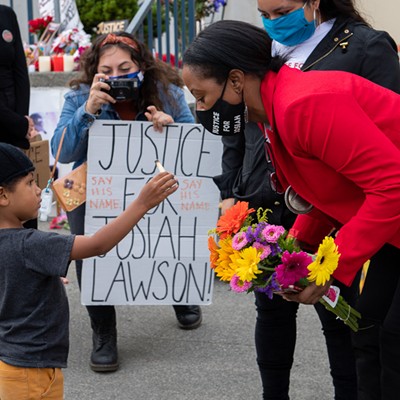 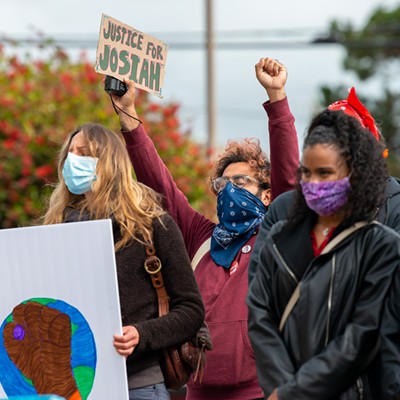 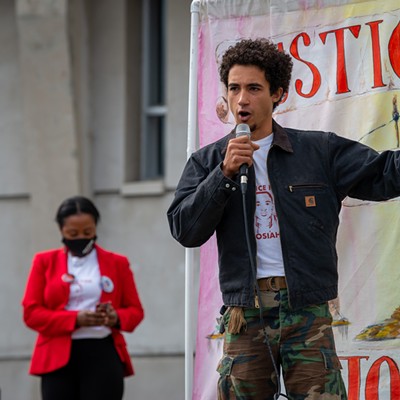 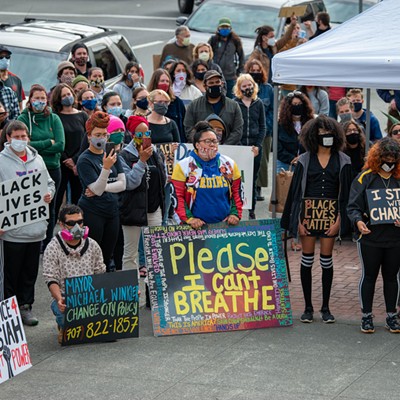 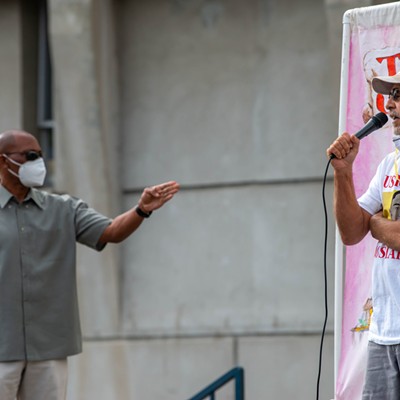 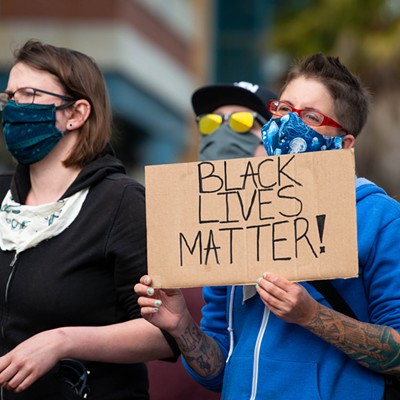 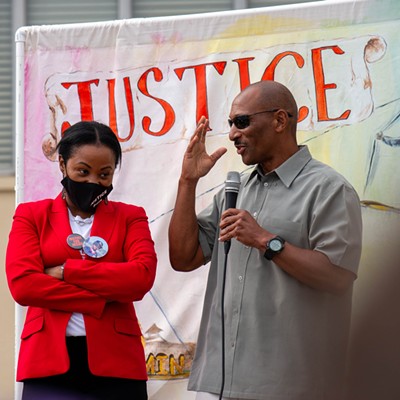 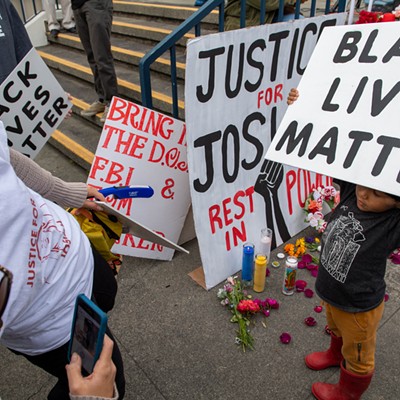