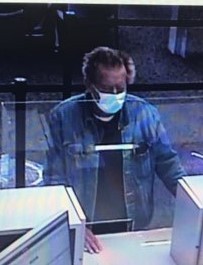 The Eureka Police Department is investigating a bank robbery that occurred shortly before 4 p.m. today.

According to a press release, police believe a man entered a bank in the 700 block of Fifth Street, handed a note to the teller demanding money and made off on foot with an undisclosed amount of cash. According to the release, the suspect did not display any weapons during the robbery and was described as a white male in his 50s or 60s with salt and pepper hair. He was last seen wearing a blue surgical mask and a jean jacket.

Police ask anyone with information about the incident or the man's identity to call EPD at 441-4032.

See the full release from EPD below.