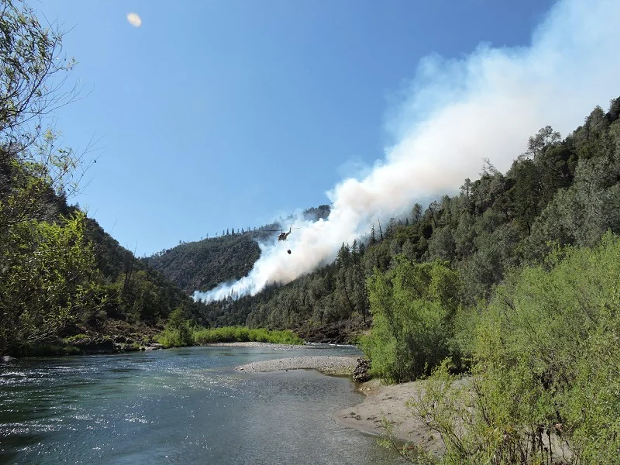 According to Shasta Trinity Forest Service:

“The Flat Fire was reported at 3:02 p.m. this afternoon near the Cedar Flat Picnic Area east of Burnt Ranch. It is currently approximately 80-100 acres in size and burning north towards Ironside Mountain. Highway 299 is closed in both directions and several structures in the area are threatened. The cause of the fires is under investigation. Current resources fighting the Flat Fire include three crews, five air tankers, two helicopters, eight engines, two water tenders, one dozer and a load of smokejumpers.”

Caltrans, meanwhile, reports that the highway could be re-opening to one-way, controlled traffic as soon as 8:30 p.m., warning motorists should expect delays.

Check out this video, from Trinity Sungrown, of a plane dropping supplies to smokejumpers on the ground.

According to a 7 p.m. tweet by Caltrans District 1: “Route 299 east of Burnt Ranch in Trinity County remains fully closed. The highway is expected to re-open to one-way traffic control at approximately 8:30 p.m., and traffic control will continue overnight. Please expect delays and plan your travel accordingly.”

PREVIOUS:
Caltrans is cautioning motorists that a vegetation fire has closed down State Route 299 east of Willow Creek near Burnt Ranch.

The Flat Fire was first reported at 3:20 p.m., apparently after a car overturned and caught fire, and grown to 80 to 100 acres within three hours, according to
Shasta Trinity Forest Service.

The Forest Service’s InciWeb reported at 5:10 p.m. that “3 crews, 5 Tankers and 2 helicopters are on scene. A crew of jumpers are on the ground. Both lanes of 299W are closed, some structures are threatened.”

According to one local resident, the fire is on the north side of the river at Cedar Flat. Fire engines from Big Bar have arrived on the scene.

The CHP page is also reported that the Trinity County Sheriff’s Department is putting out a CODE RED which alerts people through calls of emergencies in their areas.

At 4:08 p.m., the CHP page noted that the fire was burning away from the highway and one-way traffic control was in effect. But 4:11 p.m., the page said that the Forest Service is requesting to have 299 closed for one hour.

UPDATE 4:53 p.m.: Caltrans just tweeted, “Route 299 east of Willow Creek near Burnt Ranch is fully closed due to a vegetation fire. The estimated time of reopening is one hour.”