Multiple news agencies are reporting that a Eureka man, Jacob Weber Gabriel, is dead after a high speed pursuit that began near State Route 36 in the Red Bluff area. Law enforcement had been on the lookout for the 2006 Infinity he was driving in connection with multiple armed robberies and an assault of a police officer in the Chico area. 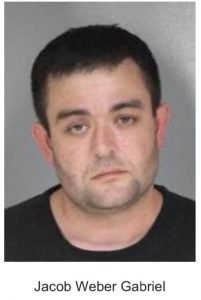 According to the CHP, when officers spotted the vehicle just before 10:30 last night and tried to pull it over, Gabriel failed to yield and took off westbound on Antelope Boulevard. The CHP’s press release says that Gabriel sped off but collided with a concrete center divider and lost control. The vehicle eventually rolled over, Gabriel was ejected and received major injuries. Gabriel was taken to a hospital where he was pronounced dead.

According to KRCR News, “CHP said the suspect had a loaded handgun in his pocket …The suspect had eluded capture earlier Tuesday night in Chico when an officer spotted his vehicle on Manzanita Court. When detectives attempted to stop the vehicle, he took off, traveling on city streets in excess of 100 miles per hour. Due to the overwhelming risk to the public posed by the fleeing suspect, the pursuit was terminated.” KRCR has more information and images here.

Gabriel was wanted for a Henderson Center bank robbery in 2005. The North Coast Journal reported then that “on Nov. 3 police allege that 18-year-old Jacob “Jake” Webber Gabriel told a teller that he was strapped with a bomb and demanded money. He fled with an undisclosed amount of cash … .”

Below are press releases related to his alleged crimes and the fatal accident. The first is from the Chico Police Department’s Facebook page:

On 06/29/2020 at about 1054 hrs. Chico Police Officers were dispatched to 2201 Pillsbury Rd. for a reported armed robbery. A male subject entered the credit union, approached a teller, removed a handgun from his waistband, and demanded money. The suspect was given cash and fled on foot.

A subsequent investigation by Chico Police Detectives has identified the robber as 32 year old Jacob Webber Gabriel of Eureka, CA. Additional evidence has also identified Gabriel as the person responsible for the Speedway Gas Station robbery in Chico on 6/28/20. An arrest warrant was issued for Gabriel for these robberies.
…

On the evening of 6/30/20, Chico Police Department Detectives located Gabriel driving a vehicle on Manzanita Court within the City of Chico. When detectives attempted to stop the vehicle, he took off, traveling on city streets in excess of 100 miles per hour. Due to the overwhelming risk to the public posed by the fleeing suspect, the pursuit was terminated. Gabriel’s vehicle was last spotted traveling northbound on Cohasset Rd. just east of the town of Cohasset in a silver 2006 Infinity FX35 hatchback, California Plate:5VPY377


During the pursuit, two of Gabriel’s passengers exited the vehicle and were detained by responding units. Both subjects were determined to be uninvolved in the robbery. One of the passengers, John Eldridge of Paradise, CA was arrested on an outstanding felony warrant. The second passenger was released without charges. Gabriel should be considered armed and dangerous. If you have any information on Gabriel’s whereabouts, contact the Chico Police Department at 530-897-4900.

On 06/30/2020, at approximately 2228 hours, Deputies from the Tehama County Sheriff ‘s Office attempted a vehicle stop a 2006 Infinity FX35 on SR-36 at Antelope Blvd. The owner of the Infinity was wanted for questioning in connection to multiple armed robberies. As Deputies initiated the traffic stop, the Infinity speed away at a high rate of speed westbound on Antelope Blvd. Tehama County Sheriff Department requested immediate assistance from the California Highway Patrol with the vehicle pursuit. At approximately 2229 officers from the California Highway Patrol Red Bluff office took over the pursuit with the Infinity. As the driver of the Infinity was was being pursued northbound on N. Main St., just south of SR-36, the Infinity collided with a concrete center median. The collision with the concrete center median caused the the driver of the Infinity to lose control and collide with a mobile electronic sign board.  The Infinity drifted on to the gravel shoulder west of N. Main St. and overturned. While overturning the driver of the Infinity was ejected. The driver suffered major injuries during the collision event and was subsequently pronounced deceased at St. Elizabeth’s Hospital. It is believed the driver was not wearing a seatbelt at the time of the collision. The name of the driver is being withheld pending notification of the next of kin. The cause of this collision is currently under investigation by the California Highway Patrol. The following agencies responded to the scene and assisted with this collision investigation; Tehama County Sheriff Department, Red Bluff Police Department, Dignity Health Ambulance and Cal-Fire.