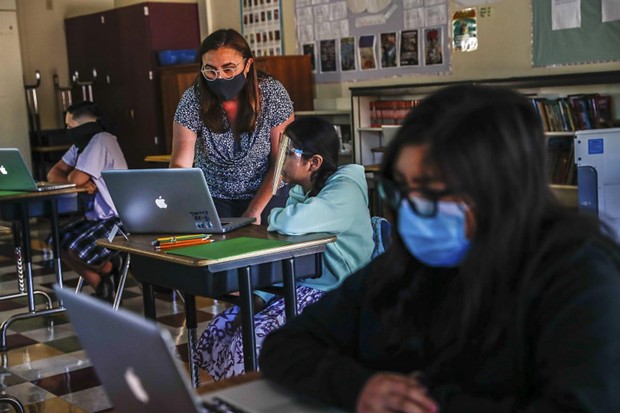 In the first week of June, a food services employee in the El Centro Elementary School District in Imperial County tested positive for coronavirus. By early July, about a dozen nutrition and transportation workers had been infected.

The positive test result briefly halted the meals distribution many low-income students and families depend on and was part of an increasing body of evidence that led the district to prepare for classes, set to start Aug. 24, to begin virtually instead of in person.

While the number of coronavirus cases, hospitalizations, and deaths has risen sharply in California over the past few weeks, Imperial County has been hit especially hard. At 127 reported deaths, the county of 180,000 residents has higher totals than the states of Idaho, Maine and several others.

So, in a June 25 letter to families, El Centro Elementary became among the first of a small but growing list of California districts that expect to begin fall instruction with shuttered campuses.

Brace for the 2020-21 term to begin under distance learning, Superintendent Jon LeDoux wrote to families, citing persistent community spread of the coronavirus.

“For a little county to have a higher number of deaths than 10 states in the entire country, it’s a pretty daunting task to even look forward at this point,” LeDoux told CalMatters.

In California, surging coronavirus cases have jeopardized efforts to return students and teachers to school – a lynchpin for healing an economy, the world’s fifth-largest, battered by the pandemic.

Achieving something resembling normalcy had already been a tenuous proposition before the landscape dramatically shifted over the last month. School districts received guidance from the state Department of Education on June 8 illustrating the drastic changes to school operations that would likely be made to reduce the virus’s spread. Local school and county health officers will be left to figure out the exact procedures for themselves.

Most California school districts still have not made firm calls on plans for fall, but many have spent the summer preparing for hybrid scheduling – part-time in-person instruction, part-time distance learning – to accommodate social distancing practices on campuses.

The state has given local school boards, superintendents and public health officials broad authority for determining fall instructional plans, though it expects schools to hold in-person instruction this year “to the greatest extent possible.” Pediatricians and school leaders both agree that students should be at school if it’s safe to do so, noting the pandemic has resulted in widespread learning loss and threatens children’s social-emotional well-being.

The sharp rise of cases in California has led to increased concern from some parents, teachers and school leaders about a return to school. Schools still lack funding and staffing to implement the logistically complex state and county recommendations for mitigating spread of the virus in schools.

Studies have found that younger students are less likely to contract and spread the virus or suffer complications, though experts say more research is needed to understand the impact on kids. There has also been increasing evidence of airborne transmissionindoors, and a recent University of California study found more than 8 in 10 of the state’s classrooms lack adequate ventilation.

The past week alone has had a whirlwind of developments related to the start of school.

President Donald Trump threatened to withhold federal funding unless the nation’s schools reported, noting the county’s surge. The California Teachers Association, the state’s largest teachers union, wrote Wednesday to state leaders — in bolded lettering — that “schools cannot reopen unless they are safe.” The teachers union for Los Angeles Unified, the state’s largest school district, called for the district to begin the year under distance learning.

Now school districts ranging from the Bay Area to the Central Coast to Southern California have made early decisions to hold off on in-person instruction to start the new term. They’re looking for ways to improve distance learning and implement new state requirements. Some are exploring pushing back the start of their first day of school as the prospect of in-person instruction grows more uncertain for a wide swath of the state.

As of the first week of July, the 26 counties on the state’s COVID-19 watchlist represented 80% of California’s 6.1 million student enrollment.

San Bernardino City Unified, the state’s seventh-largest school district, began planning for reopening campuses in May, researching how other countries were bringing their students and teachers back and sending teams of employees to measure classrooms to see how many students could fit six feet apart.

Rachel Monárrez, an assistant superintendent for the district, said San Bernardino City Schools were making an effort to begin under a hybrid model in time for the district’s Aug. 3 start, among the earliest start dates in California. However, when more school-age children in the county began testing positive for coronavirus in early June, it concerned decisionmakers.

At its June 30 meeting, the local school board decided to hold off on in-person instruction.

“We were putting our gas on the pedal just to get things moving, and then in June, the numbers started to climb again, especially toward the end of the month,” Monarrez said.

Monárrez said it’s difficult to predict if and when the district would resume some semblance of in-person instruction. The district will continuously monitor local cases, though it’s likely there would need to be evidence of more than two weeks of downward-trending data to recommend reopening schools, she said.

Ashley Bettas-Alcalá, president of the San Bernardino Teachers Association, the local teachers union, said the district made the right call.

Many teachers in the district, Bettas-Alcalá said, are conflicted. While some educators feel comfortable about returning to school, others fear getting the virus and passing it on to vulnerable family members. Though teachers want to return to school with their students, there remain concerns that schools do not yet have all of the necessary measures put in place to mitigate the spread of the virus in schools.

The state has distributed to local school districts a 60-day supply of face coverings, shields and hand sanitizer, though new estimates have shown the high costs attached to socially distant schools. According to an estimate by AASA, the School Superintendents Association, it would cost an average district of roughly 3,700 students about $1.8 million extra this school year to reopen schools with added safety measures.

“People are feeling a little bit more scared and more cautious just because the numbers are continuing to rise,” Bettas-Alcalá said, “and that’s really concerning.”

Gov. Gavin Newsom said Thursday that schools would not be asked to physically reopen unless it’s deemed safe to do so, adding that schools have to “make sure that we’re doing justice to distance learning in a way that’s equitable for all kids, not just some kids.”

The possibility that some districts could be using distance learning for prolonged stretches of time this school year has led to calls from some civil rights groups for the state to require at least three hours of live instruction per school day.

The state budget signed by Newsom created new requirements for distance learning that included taking student attendance and ensuring some sort of daily live contact with students. But the budget did not set requirements for live instruction — a sought-after distance learning component by parents that experts say is critical for engaging and teaching students when they're at home.

Under the new requirements, school districts will be required to complete "learning continuity and attendance plans" detailing their strategies under distance learning, with the state Department of Education releasing a draft of the template July 13.

Brian Rivas, senior director of policy and government relations for the Education Trust-West, said, at minimum, the state should require school districts to report in those plans whether and how much live instruction students will receive “so that parents know what they’re getting.”

“We think parents have a right to know that,” Rivas said, “and they should be able to ask questions and advocate locally if they feel like that’s insufficient.”

The school board of the Salinas Union High School District in Monterey County decided Wednesday night to kick off the Aug. 5 start of the new year under distance learning.

Anthony Rocha, a Salinas Union High trustee, said a key factor in his decision to support a distance learning start was a local outlook of the virus’ containment that “dramatically changed in a downward trajectory” over the last two weeks.

The school district, he said, has a “moral obligation” to help mitigate the pandemic’s spread. But Rocha added that physical school closures have harmed students who lack reliable internet access, are homeless or come from low-income households, and hopes greater attention is placed on serving those students.

There’s no set date for when the Salinas Union High district will transition to the hybrid scheduling it had been preparing for, according to Rocha, though the school board will receive updates on reopening and distance learning every two weeks.

“Everything is changing so rapidly, and there’s no way to have a clear idea of when it might be safe to return in any way in person, hybrid or not,” he said.

Get the latest on coronavirus in California with our frequently asked questions, dashboard tracking the numbers and our latest updates.