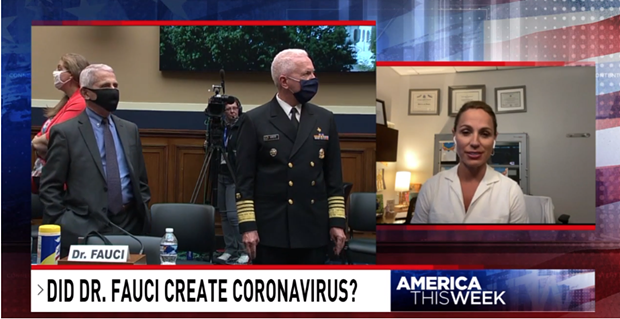 UPDATE:
While the controversial America This Week segment had been slated to run on KAEF's 11 p.m. broadcast today, Sinclair has decided to hold it for further review, according to North Coast News' Nazy Javid.

"Our parent company further reviewed this week's planned episode of ATW and has decided to delay its airing for one week," she wrote in an email. "The ATW team plans on spending the coming days bringing together other viewpoints to air on the show to add additional context to the segment. All stations, including ours, have been notified not to air this episode and will instead be re-airing last week's episode in its place."

PREVIOUSLY:
If you happen to catch an America This Week segment on a local news broadcast on one of Sinclair's vast array of television stations — including Eureka's KAEF North Coast News — featuring the maker of the debunked documentary Plandemic, pay it no mind. It's the work of snake-oil conspiracy theorists.

The nonprofit MediaMatters published a thorough debunking of the segment here, so we don't feel any need to go to those lengths. But please rest assured that, no, Anthony Fauci, head of the White House coronavirus task force and perhaps the nation's best known infectious disease expert, did not create COVID-19, as one chyron provocatively asked, nor is there any evidence that the virus escaped from a laboratory in Wuhan, China. Also, for the record, there is no evidence that "healing microbes in the ocean" help treat the virus, nor that flu vaccines increase the odds of getting COVID-19, that vaccines kill millions of people or hydroxychloroquine (that again) cures or prevents the disease. To further clarify the record, there's also no evidence the boogeyman, unicorns or Neverland are real.

And if you need further evidence that featured guest and Plandemic producer Judy Mikovits is just peddling fiction, consider that YouTube, Facebook and multiple other platforms have removed the film from their sites for containing "potentially harmful misinformation." Have you seen the shit that YouTube and Facebook deem OK for public consumption? OK. Enough said.

America This Week host Eric Bolling followed the segment with an interview of Fox News medical contributor Nicole Saphier — because, balance! Even Saphier dismissed Mikovits' rantings as conspiracy theorist nonsense, though she added the unfounded claim that virus likely was man-made in a laboratory. (Again, there is no evidence this is true.)

If you want to read a transcript of the segment, you can find it here. The Journal reached out to KAEF North Coast News to see if it had aired the segment or plans to but did not receive a response.