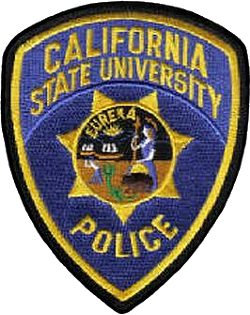 Humboldt State University police arrested two people suspected of a Virginia murder yesterday while conducting a routine patrol, according to a press release.

Sgt. Joe Jones and officer Billy Kijsriopas were patrolling the University Corporation Yard off Samoa Boulevard at about 1 a.m. Wednesday when they found an unoccupied vehicle with stolen license plates parked on the east side of the building, according to the release. The officers approached on foot and found three people sleeping near the car on the building's stairwell.

The officers roused the people and ran their names, at which point they learned that two — Daniel Fish, 37, and Ashleigh Nicole McCallister, 23 — were wanted on a murder charge out of Henry County, Virginia. The two were taken into custody without incident and police determined the third person — "an unsuspecting traveler" — was not connected to the murder.

Fish and McCallister — along with Douglas Gillespie, 25, who was arrested in Texas last month — stand accused of gunning down Robert Wayne Williams at his Henry County apartment on the night of June 5 and face second-degree murder charges.

See the press release from UPD copied below:


University Police Arrest Murder Suspects out of Virginia
On Wednesday, July 29, at 1:03 a.m., University Police Department Sergeant Joe Jones and Officer Billy Kijsriopas were on patrol at the University Corporation Yard, a satellite campus off of Samoa Boulevard in Arcata. They discovered an unoccupied vehicle with stolen plates parked on the east side of the building.

As they approached on foot, they located three people sleeping near the vehicle on the exterior of the building on a stairwell.

All three were identified, and two returned with felony warrants out of Henry County, Virginia, for homicide. UPD arrested Daniel Fish and Ashleigh Nicole McCallister, the two murder suspects, without incident and took the vehicle for evidence. One unsuspecting traveler, who had no connection with the murder suspects, was interviewed and released on scene. This is still an active investigation and UPD is in direct contact and coordination with the Henry County Sheriff’s Office.

Arcata Police Department was instrumental in their immediate support and response, not only on scene but with coordination alongside UPD dispatch in providing quick data response, which ultimately gave officers vital information on the suspects.

“Our officers come to work every day with the singular purpose of keeping our campus and community safe,” says Christina Lofthouse, Interim UPD Chief. “These arrests highlight the great job both UPD and Arcata PD do in serving our community. My hope is that these arrests will give the family of the victim some peace and allow the healing process to begin.”