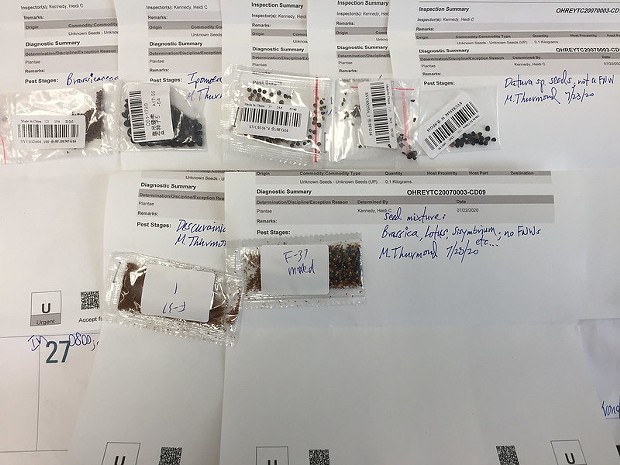 Mysterious packages of seeds are popping up in local mailboxes — sometimes labeled as jewelry or beads — and the Humboldt County Agricultural Commissioner’s Office is urging anyone who’s received the unsolicited bundles not to plant them.

So far, about 20 local residents have reported being on the receiving end of the deliveries that appear to be from China, Agricultural Commissioner Jeff Dolf said in an email to the Journal.

“At this point we have collected six seed shipments and are still encouraging members of the public who have received seeds to contact the Agricultural Commissioner’s Office so we can make arrangements to secure the seed,” he wrote.

Humboldt County is by no means the only place this is happening. The packets have arrived in at least 22 states as well as Canada, countries in the European Union and Australia, according to the U.S. Department of Agriculture. Officials are asking residents not to open the packages but instead turn them over for testing.

It’s also not a new problem, per se. Dolf states in his email that “the U.S. Customs and Border Protection estimates that there were 15,000 interceptions of seeds from all sources worldwide and 5,000 from China and Hong Kong in 2019.”

So, what’s the deal with these latest enigmatic arrivals? No one is quite sure but the USDA put out a statement earlier this week saying there was no evidence to indicate it's anything other than a “brushing scam,” in which internet sellers send out goods then try to increase sales by posting false customer reviews.

“We have identified 14 different species of seeds, including mustard, cabbage, morning glory and some herbs like mint, sage, rosemary, lavender, then hibiscus and roses,” said Osama El-Lissy, deputy administrator for the Animal and Plant Health Inspection Services’ Plant Protection and Quarantine, said in an interview on the USDA website. “The main concern is the introduction of pests and disease that could be harmful to U.S. agriculture.”

While the plants El-Lissy listed might sound rather benign, some morning glory species are highly invasive — as anyone who has the dreaded bind weed in their yard can attest — and the same goes for mint.

“We are working closely with (U.S. Customs and Border Protection) to intercept illegally imported seed packages,” the USDA said in a news release. We’re also working with other federal authorities, the U.S. Postal Service, express carriers and online marketplaces to stop future deliveries.”

Mystery Seeds
By Kimberly Wear
Click to View 5 slides
Back in Humboldt, Dolf also noted the seeds could potentially harm local crops as well as the region’s native habitat. To ensure the threat is minimized, he asks anyone who’s received one of the packages to contact his office.

“Seeds can vector viruses, bacteria, nematodes and weed seeds, all of which could be potentially harmful to agriculture and the environment in the U.S.,” he said. “The Agricultural Commissioner’s Office is collecting seeds locally and will send them to state or federal authorities for testing.”


According to the California Department of Agriculture, exotic pests account for more than $3 billion in economic losses each year. Invasive plants — such as English ivy — also threaten habitats like the North Coast’s redwood forests, upsetting delicate ecosystems by out competing native flora for space and resources, as well as, by extension, posing harm to area wildlife.

Dolf recommends the following steps for recipients of the seeds:
1. Do not open any of the seed packets.
2. Do not plant any of the seeds.
3. Seeds can be mailed to the Agricultural Commissioner’s Office at: 5630 S. Broadway, Eureka, CA 95503. If you cannot mail the seeds, contact the Agricultural Commissioner’s Office to arrange for collection.
4, If already opened, place all materials (seeds & and packaging) into a zip lock bag.

Humboldt residents can also contact the agricultural commissioner’s office at 441-5260 for additional instructions and to make arrangements for the seeds’ collection.

Meanwhile, the USDA said an investigation is ongoing and there are reports of seed packets coming in from countries other than China.

“At this point, we have not identified any link to agro-terrorism. This is an evolving situation, and we are working closely with federal authorities to ensure we are evaluating every possibility,” a USDA post states.