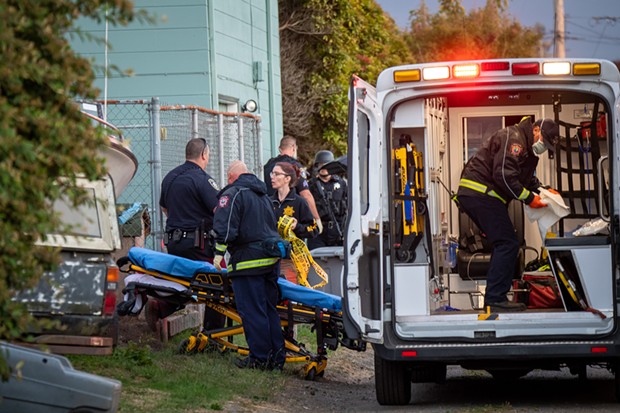 The Eureka Police Department this evening released a video briefing on the July 23 fatal officer-involved shooting of John Karl Sieger, which includes a timeline of the events that took place.

The briefing by Chief Steve Watson and Capt. Brian Stephens also contains audio of 911 calls as well as images and videos from the scene, where officers arrived just after 5 p.m. on a report that Sieger, 51 was making suicidal statements and texting a friend images of alcohol and a handgun.

The incident lasted just over three hours from the time officers first arrived at the 2800 block of Lowell Street to when the shooting took place, during which neighbors were evacuated and two family members safely exited the home.

“This tragic outcome is not what we expected or wanted to happen,” Watson said in the video.
A crisis negotiator was brought to the scene, according to the briefing, but multiple attempts to talk with Sieger were unsuccessful although he continued to communicate intermittently with the friend, at one point reportedly saying he would shoot if officers saw him and that he respected police and didn’t want to be forced to kill one.

Not long after the family members left, around 7:30 p.m., an officer gained entry to a second story room in the house and observed Sieger in the backyard, where about 15 minutes later he is believed to have fired three shots in an unknown direction, with casings later found near the back fence.

Sieger, Stephens said, left the backyard at 8:23 p.m. through a gate and was told to show his hands, to which he responded, “No, fuck you,” raised his right hand and pointed a gun at officers in the adjacent alley before being shot.

An autopsy found he died of multiple gun shot wounds, according to the briefing, with four officers firing their weapons.

“We have no physical evidence to show Mr. Sieger fired his weapons at officers,” Stephen said in the briefing.

A news release sent out with the video also names the officers involved, all of whom were cleared to returned to active duty today after being placed on temporary paid leave, which is protocol in officer-involved shootings.

The incident remains under investigation by the Humboldt County multi-agency Critical Incident Response Team, with EPD also conducting an internal probe. Additional audio and video recordings will be released by Sept 6, according to the EPD release, with complete records related to investigation released by Jan. 19, if not sooner.

Watson noted that the information being released tonight was “based on what we know now” and that the situation is still in the early stages of investigation.

“While we wait for these final investigative determinations, please join me in keeping the family of Mr. Sieger and each of the involved officers, dispatchers, and their families in our collective thoughts and prayers. Many are hurting as a result of this tragic incident and need our understanding and support,” he said in the release.

Read the full EPD release below:


The Eureka Police Department and the Humboldt County multi-agency Critical Incident Response Team (CIRT), including investigators with the District Attorney’s Office, are continuing to investigate the officer-involved shooting incident that resulted in the death of John Sieger on July 23, 2020.

This is an ongoing, active investigation and additional information will be released in the future as it becomes available and authorized by law. If anyone has further information related to this incident, they are asked to contact Detective Corrie Watson at 707-441-4032. The Eureka Police Department is committed to transparency and safeguarding the community’s trust in our daily efforts to protect and serve you.

As part of this commitment, we have prepared an informational critical incident community briefing video that includes audio from 911 calls, officer/dispatch radio transmissions, video from officers’ body-worn cameras as well as additional information.


This briefing video is designed to expeditiously share important, relevant information with the public about this officer-involved shooting incident. It is intended to provide significant, early details about this tragic incident as we currently understand them. However, it does not represent a conclusion to this investigation or a final report evaluating officers’ actions.

It is important to note we are still in the early stages of this investigation and our understanding of the incident may change as additional evidence is collected, analyzed, and reviewed. We also will not draw final conclusions about whether or not the actions of the involved officers were consistent with our policies and the law until all the facts are known and the investigation is complete.

The critical incident community briefing video can be viewed here:

The names of the involved officers and their roles in this incident are as follows:

• Captain Patrick O’Neill was the Incident Commander. Captain O’Neill oversees EPD’s Field Operations Division including Patrol. He arrived on scene from home around 6:37 p.m. and assumed incident command from Sergeant Omey. Captain O’Neill did not fire his weapon. Captain O’Neill has 26 years of law enforcement service and has been employed with EPD since March 1995. Captain O’Neill has had formal training in tactical communication and crisis intervention (CIT), and he is actively involved in Humboldt County’s CIT training program.

• Sergeant Jon Omey was the patrol supervisor on scene. Sergeant Omey has 11 years of law enforcement service and has been employed with EPD since April 2009. Sergeant Omey fired his patrol rifle during this incident. Sergeant Omey has had formal training in de-escalation and tactical communication*, crisis negotiation, special weapons and tactics, and crisis intervention (CIT).

• Officer Patrick Bishop has over 17 ½ years of law enforcement service and has been employed by EPD since September 2007. Officer Bishop fired his patrol rifle during this incident. Officer Bishop has had formal training in de-escalation and tactical communication, crisis negotiation, special weapons and tactics, and crisis intervention (CIT)

• Officer Andrew Endsley has 16 years of law enforcement experience and has been employed by EPD since July 2010. Officer Endsley fired his patrol rifle during this incident. Officer Endsley has had formal training in crisis negotiation, crisis intervention (CIT), and tactical communication.

• Officer Brian Wilson has 3 ½ years of law enforcement experience and as has been employed by EPD since December 2016. Officer Wilson fired his handgun during this incident. Officer Wilson has had formal training in tactical communication.

As is standard protocol, all involved officers were placed on temporary paid administrative leave following the incident. Following a review of the investigation based on the best information we have currently, all 5 involved officers have been cleared to return to full duty effective Monday, August 3rd.

Additionally, in our department’s continued commitment to our officers’ health and well-being, all personnel involved in the incident received counseling services through a licensed therapist.

In total, officers, mental health and crisis negotiation specialists attempted to negotiate with the Mr. Sieger for nearly two hours. They used a variety of de-escalation techniques and 3 “T” measures: Time, Talk, and Tactics, which included distance and cover, in an attempt to manage the incident without use of force.

As can be seen on the videos included in the critical incident community briefing, the final contact with Mr. Sieger occurred very rapidly and did not allow opportunity for dialogue with him before he presented an imminent threat of death or serious bodily injury by pointing a loaded .40 caliber, semi-automatic Glock 22 handgun at officers. While the critical incident community briefing video is intended to provide the public with facts, details, and context concerning Mr. Sieger’s death as we currently understand things, the public will have the opportunity to draw their conclusions in the coming months.

When the investigations are complete, these records including the full investigation, findings, criminal and administrative reports, officer and witness statements, audio and video recordings, photographs, and other related investigative and evidentiary material will be fully disclosed to the public as authorized by SB 1421 and AB 748.

The audio/video recordings will be released in their entirety by September 6, 2020 in accordance with AB 748. The complete records related to this investigation will be released by no later than January 19, 2021 pursuant to SB 1421 though EPD will seek to release them earlier if possible.

The Eureka Police Department again sends our heartfelt condolences to John Sieger’s family with whom we’ve been in close contact. This tragic outcome was not what we wanted and we are deeply saddened by what happened. “While we wait for these final investigative determinations, please join me in keeping the family of Mr. Sieger and each of the involved officers, dispatchers, and their families in our collective thoughts and prayers. Many are hurting as a result of this tragic incident and need our understanding and support.” ~ Chief Steve Watson

*A California Commission on Peace Officer Standards and Training (POST) certified de-escalation and tactical communication course modeled from the Police Executive Research Forum (PERF) program Integrating Communications, Assessment, and Tactics (ICAT). While ICAT is designed especially for situations involving persons who are unarmed or are armed with weapons other than firearms, and who may be experiencing a mental health or other crisis, the basic principles are applicable across a wide-range of situations.

The training program is anchored by the Critical Decision-Making Model that helps officers assess situations, make safe and effective decisions, and document and learn from their actions. ICAT incorporates different skill sets into a unified training approach that emphasizes scenario-based exercises, as well as lecture and case study opportunities. The training blends in-depth discussion and realistic scenarios requiring officers to apply the tactics and communications skills they learned.