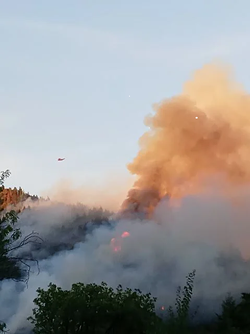 Last night, fires broke out along Tish Tang Road near Hoopa. The flames quickly grew and by last night the Jones Point Fire (as the separate spots were collectively known) was reported to be about 100 acres with 0 percent containment.

This morning, the Northern California Geographic Coordination Center reports that the fire has grown to 130 acres. The fire is burning up slope in brush and timber in rugged terrain and is 5 percent contained, according to the Coordination Center.

“Crews made good progress on the North flank of the fire last night,” the Center reports. “Cultural resources and high value timberland are threatened.”

Several residents of the Hoopa area are sharing photos and videos on social media of multiple fire starts on the east side of the Trinity River in the Tish Tang Road area.

The first reports came in about 6:30 p.m. Victoria Rousseau, a resident of the area, said, “I’m sitting in my back yard watering and you can tell by the timing they all started. Someone lit them as they went down the hill.”

The CHP Traffic Incident Information Page reports a request for extra patrols on state routes 299 and 96 looking for a vehicle that might be dragging chains.

UPDATE 9:10 p.m.: The Northern California Geographic Coordination Center is calling this the Jones Point Fire. The site reports that the fire has now reached 100 acres. It states the fire is moving in brush and timber and is zero percent contained.

“Fire is burning up slope in steep rugged terrain,” the coordination center states.