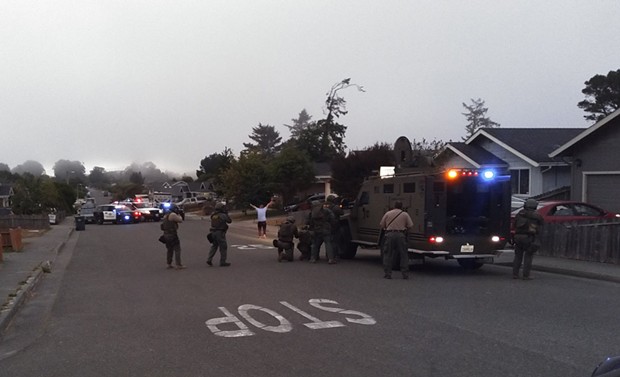 One person was detained after a two-hour standoff at a Thiel Avenue home in McKinleyville following reports of repeated shots being fired toward a neighboring backyard, the Humboldt County Sheriff's Office reports.


At least one bullet reportedly entered the neighbor’s residence.


According to a news release, Ryan Gordon Shaw, 39, surrendered after negotiations. No one was injured during the incident. Read the full HCSO release at the bottom of this report.


Humboldt County Sheriff’s Office deputies are setting up a perimeter after receiving reports of multiple shots fired from a residence on Thiel Avenue in McKinleyville.

They have requested that Hiller Road be closed at Columbus Avenue and at McKinleyville Avenue. Soon after arriving at scene at 6:49 p.m., deputies are reporting seeing someone shooting out of the residence.


Local residents are asked to stay inside or avoid the area.


#HappeningNow Active law enforcement investigation on the 2000 bl of Thiel Ave in McKinleyville. HCSO responding to reports of shots fired into a nearby residence. No known injuries at this time. HCSO SWAT dispatched to respond. Residents should stay inside or avoid the area.

UPDATE 6:57 p.m.: “Shots fired. Shots Fired!” reported an officer over the scanner. Neighbors are reporting they have received an alert and are being asked to stay inside.

UPDATE 7:05 p.m.: More shots have been fired, according to reports from the scene. The individual is reported to be shooting toward the backyard of a woman who originally reported the shooting. SWAT is on their way.


UPDATE 7:37 p.m.: An officer reported that an additional shot was fired.


UPDATE 8:11 p.m.: The suspect is moving about the residence and may have thrown something out of the window, according to the dispatcher.

UPDATE 8:20 p.m.: Shots fired again by the suspect. The SWAT team is moving toward the home and surrender commands are being issued.

UPDATE 8:21 p.m.: Another shot fired by the suspect, an officer at the scene reports.


UPDATE 8:36 p.m.: One person detained and medical is being released, according to the scanner. Reenforcements requested from Pelican Bay are being cancelled.

On August 10, 2020, at about 6 p.m., the Humboldt County Sheriff’s Office Emergency Communications Center received a 911 call regarding shots fired into a residence on the 2000 block of Thiel Avenue in McKinleyville.

Deputies were successful with their negotiation and Shaw was taken into custody peacefully. No one was injured during this incident. Shaw is being booked into the Humboldt County Correctional Facility on charges related to this incident. More information will be released when available and appropriate.