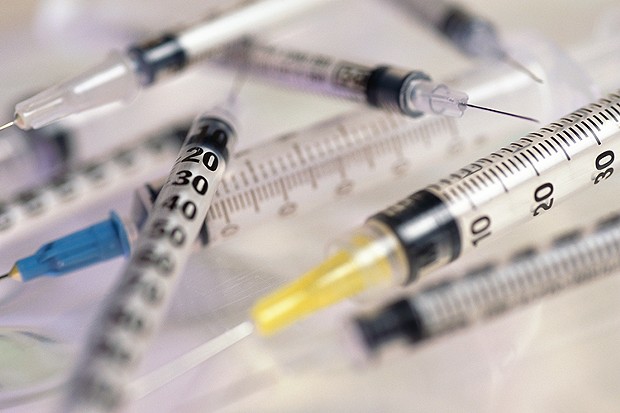 The city of Eureka announced today it is opposing reauthorization of the Humboldt Area Center for Harm Reduction’s syringe exchange program due to “ongoing concerns” about operations at the nonprofit's Third Street location.

The California Department of Public Health authorized HACHR to run the harm reduction program for a two-year period in October of 2018 and had sought the city’s input as the state decides whether to do so again, according to a news release.

An Aug. 7 city memorandum sent to CDPH outlines a series of allegations about the center's workings based on undercover law enforcement operations in recent months, including that HACHR is “complicit in the sale and on-site use of drugs” and has supplied “methamphetamine kits” at the facility.

“Years of effort by the city and the community to work with HACHR have been ineffective,” the city’s new release states. “It is the city’s stance that HACHR has not, in good faith, responded to the community’s legitimate concerns about HACHR’s operations, and that HACHR’s (syringe exchange program) is not operating in compliance with state and local law.”


In response, HATCHR Executive Director Lasara Firefox Allen and board members sent out a release denying allegations in the city’s memorandum, stating they are “disappointed” and “look forward to speaking with city officials about their concerns.”

“HACHR is committed to the entirety our amazing community, including people who use drugs, people experiencing houselessness and other marginalized people,” the release states. “To this end, we keep an open door policy, welcoming anyone who needs services or wants to learn more about us. We continue to proactively reach out to address community concerns and are committed to engaging in productive dialogue.”

HACHR has long had a tumultuous relationship with the community, with many frustrated Eureka residents and business owners pointing to its needle exchange program as a major contributor to the proliferation of used syringes and other drug paraphernalia littering city parks, streets and playgrounds. But the nonprofit and supporters have maintained it lives up to its name and reduces harm.

Eureka’s memorandum states the city is not against exchange programs “in theory,” but is opposed to a program run by an organization that has “not lived up to its promises to the city and its citizens.”

It’s no secret Eureka, like many other communities across the nation, has serious opioid issues, among other addiction problems, and advocates point to the potential life-saving interventions harm reduction programs can offer, including decreased disease transmission by providing clean needles and referrals for treatment services.

Eureka Councilmember Kim Bergel, who has work for years to smooth tensions around harm reduction services, said she feels betrayed by HACHR.

Bergel added that many council members, herself included, paid a high price for their efforts to reach out to HACHR to address community concerns but she still believes harm reduction programs are important to public safety.

“I feel like we really tried to work with HACHR on so many levels,” Bergel said, noting she is grateful for the work the Eureka Police Department did “to investigate, verify and solidify some of the things we were hearing” and which HACHR officials had assured her were not occurring. “I feel disappointed at best and I feel lied to. It’s not a good feeling.”

Read the full city of Eureka release below:

The CDPH is now deciding whether to reauthorize HACHR’s SEP in Eureka. The CDPH asked the City of Eureka to provide input on the re-authorization process.

On August 7, 2020, the City of Eureka submitted a letter and memorandum in opposition to HACHR’s application for reauthorization. The City of Eureka is in favor of SEPs that comply with the letter and intent of the law, as evidenced by the City Council’s Resolution in Support of HACHR in 2016. However, the City cannot support the SEP as operated by HACHR at this time.

The City’s opposition is based on its investigation into ongoing concerns about HACHR’s operations at its 3rd Street location. Based on neighbors’ complaints, the Eureka Police Department launched a fact-finding investigation, the details of which were forwarded to the CDPH and are linked to this release. Years of effort by the City and the community to work with HACHR have been ineffective.


It is the City’s stance that HACHR has not, in good faith, responded to the community’s legitimate concerns about HACHR’s operations, and that HACHR’s SEP is not operating in compliance with state and local law.


Additional information will be released by the City Attorney as it becomes available.

Read the HACHR release below:

We are extremely disappointed at the recent statement released by the City of Eureka opposing Humboldt Area Center for Harm Reduction’s (HACHR) state reauthorization. We look forward to speaking with City officials about their concerns.

HACHR has been transparent with local officials and we welcome community members to collaborate in seeking solutions to the complex issues of substance use and the health and wellbeing of all people. HACHR is an important community resource.

We partner with multiple local, state, and national organizations to ensure that our policies and practices are in alignment with the most current standards of care. In addition, we adhere to evidence based harm reduction practices supported by the California Department of Public Health, the Center for Disease Control, and the World Health Organization.

We would like to directly address some of the accusations included in the statement release by the City of Eureka.
 HACHR has a zero tolerance policy for drug use or selling on HACHR property. All people accessing services at HACHR are made aware of this policy and sign an agreement to adhere to this policy.
 HACHR does not promote methamphetamine or any other substance use. HACHR recognizes that people use drugs and follows harm reduction principles and practices by meeting people where they are. We do not enable drug use; we enable health and well-being through nationally recognized harm reduction interventions. Safe smoking kits are an evidence based harm reduction tool.
 HACHR takes syringe litter very seriously and has always had syringe clean up as a part of our work. We have a dedicated staff person who picks up improperly discarded syringes and builds relationships with local businesses and community members who have syringe litter concerns. Proper syringe disposal education is a key part of the services we provide.

HACHR is committed to the entirety our amazing community, including people who use drugs, people experiencing houselessness, and other marginalized people. To this end, we keep an open door policy, welcoming anyone who needs services or wants to learn more about us. We continue to proactively reach out to address community concerns and are committed to engaging in productive dialogue.