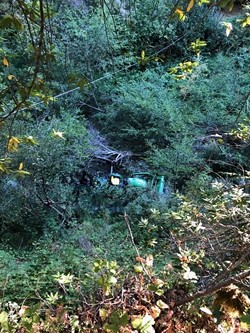 The quick action of Briceland Road area residents yesterday evening helped contain a hydraulic fluid leak in Redwood Creek after a tractor ended up in the waters following an unloading incident.

According to a CHP release, the incident happened around 5:30 p.m. as the tractor was being removed from tilt deck trailer attached to a truck, which was parked on a slope. The shift in weight lifted the truck to come up off the ground and the truck and trailer wen over the tire chock, sliding toward the south. The man on the tractor was able to jump off as the truck and trailer it was on continued backward on Briceland Road and went over an embankment, coming to rest against a tree.

The tractor then dislodged from the trailer and rolled down into the creek.

Briceland Road was closed for more than three hours while the vehicles were retrieved. The incident remains under investigation.

On 8/11/20 at approximately 1730 hours, Dan Watson parked a 2017 Ford F250, towing a 2019 TowMaster tilt deck trailer on Alapok Lane at Briceland Road. The combination of vehicles was parked facing northbound on an uphill slope when Watson began to unload his John Deere tractor from the Towmaster.

Due to the swift action of local residents who placed straw in the creek to absorb the hydraulic fluid, the spill was minimized to the area in close proximity of the John Deere tractor.

Humboldt County Environmental Health responded due to the Hazardous Materials spill and is overseeing the cleanup of the hydraulic fluid from the creek bed. Humboldt County Roads Department responded and assisted with traffic control. This collision remains under investigation by the California Highway Patrol Garberville Area.