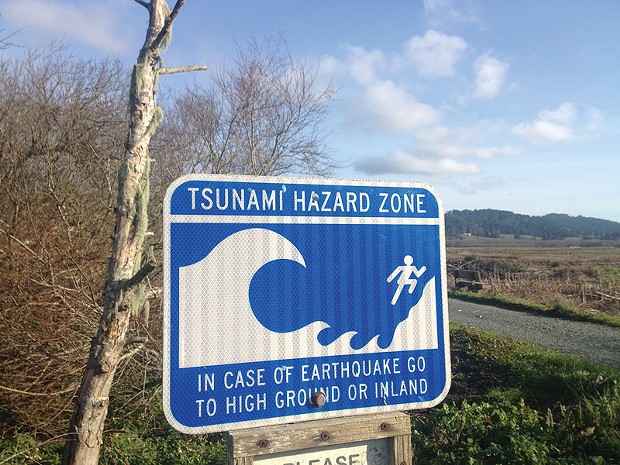 “We have new scientific information and better computer modeling which has resulted in better forecasts about whether or not an earthquake will create a tsunami, and the path one would take. This new information can help local governments and emergency response providers update their community evacuation plans," acting state geologist Steve Bohlen said in the release.

The inundation map shows how far inland a surge of ​seawater might go during a worst-case scenario event. The evacuation map shows where people evacuating a tsunami can go to ensure their safety.
Read more about Humboldt County affected areas and tsunami zones here.


SACRAMENTO – The California Geological Survey (CGS) today released two tsunami hazard maps for Humboldt County. One shows potential tsunami inundation – how far inland a surge of ​seawater might go in a worst-case scenario event. The other map shows where evacuees from a pending tsunami should go to ensure their safety.

“We have new scientific information and better computer modeling which has resulted in better forecasts about whether or not an earthquake will create a tsunami, and the path one would take. This new information can help local governments and emergency response providers update their community evacuation plans.”

Some communities have produced their own evacuation maps in the past, but this is the first time CGS has been directly involved in their creation and made them available on a centralized website.

“Local government officials around the state have asked for our help creating them, and we worked closely with local authorities on the Humboldt County evacuation map,” said Rick Wilson, head of the CGS tsunami program. “Cities and the county decided where to draw the lines for the areas of evacuation. It’s an important tool should a tsunami occur.”

In addition to working with Humboldt County, CGS collaborated with the local Governor’s Office of Emergency Services representative, the Redwood Coast Tsunami Work Group, and the National Weather Service in Eureka, and in developing the maps.

Engineering geologist Jason Patton, who investigated evidence of prehistoric tsunamis in Humboldt Bay in earning his master’s degree at Humboldt State University, led this mapping project for CGS and is now working on maps for Del Norte County.

Generally, the evacuation maps instruct people to go beyond a certain street or known landmark to ensure their safety. In Humboldt County, some tall dune areas on the Samoa Peninsula have been identified as safe areas. ​​

"We can't ensure that all high dunes and bluffs will be safe in all tsunamis on the southern Samoa Peninsula," Wilson said.

"For Eureka itself, typically people have to move a few blocks inland to get to an evacuation area. That sounds relatively easy to do in 10 minutes, but the concern is that if there's a big earthquake offshore, there could be a lot of damage to the streets and roads, live power lines down, and a crush of people trying to get away from the ocean as fast as they can, so it might be challenging."

Tsunamis are an uncommon but legitimate threat in California. Over 150 tsunamis have hit California’s coast since 1800. Most are small — sometimes barely noticeable — but nearly a dozen have caused fatalities or significant damage, most recently during the March 11, 2011 tsunami from Japan.

The most devastating tsunami to hit California occurred March 28, 1964. Surges reaching 21 feet high swept into Crescent City four hours after a magnitude 9.2 earthquake in Alaska. Ten people died, and half of the waterfront business district was destroyed.

A major earthquake on the Cascadia subduction zone — the 700-mile undersea boundary where two tectonic plates are colliding — could have a significant impact on the North Coast. Scientists have evidence that the subduction zone in 1700 generated a magnitude 9 earthquake and tsunami.
​
A similar event could send surges onshore up to 50 feet high toward Crescent City and 30 feet high along the outer coast of Humboldt Bay and the Eureka area. A big quake on the Cascadia megathrust subduction fault might cause five to six minutes of shaking and give people along the coast a maximum of 10 minutes to get to an evacuation area.

“It’s not out of the question there will be a big earthquake there in the next 100 years,” Wilson said. “That’s the most damaging scenario for the area north of Cape Mendocino. A large quake generated by the Cascadia subduction zone could create waves twice as large as the 1964 event, especially in Crescent City.”

In the next few months, CGS will release updated maps for other counties, possibly including Del Norte, Alameda, and Los Angeles counties.

"We hope to have the entire coast updated within two years,” Wilson said.

Neither the inundation nor the evacuation maps are regulatory. But CGS is working with an advisory panel to develop tsunami zone maps to guide local land-use planning under the Seismic Hazards Mapping Act.