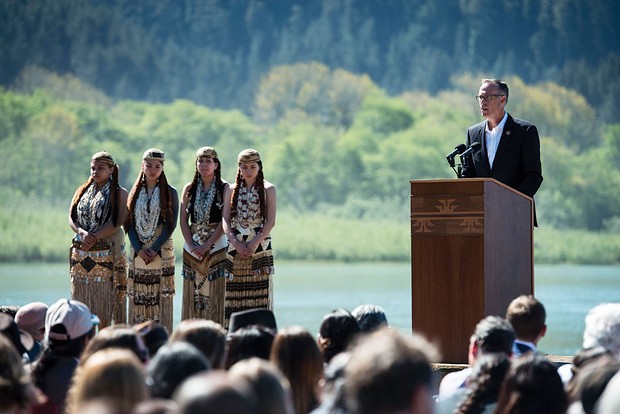 Since time immemorial, as summer turns to fall, the Karuk Tribe’s fatawana, or world renewal priests, have gathered for a renewal ceremony that spreads across many days. They fast and hike to ancient prayer sites. They dance and ritualistically bath in the waters of the Klamath River, all in an effort to bring balance back to the world.

But in the long hot days of August of a drought year with dense toxic algal blooms already forming behind a series of upriver dams, many fear that when it comes time for the fatawana to cleanse themselves in the river later this fall, its banks will already be lined with water quality alerts, warning that contact with the water could cause skin irritation and rashes. That would leave Karuk religious leaders to choose between their own safety and what they see as their religious duty to restore balance to the world.

And that situation cuts to the heart of why the decades-long effort to remove four hydroelectric dams that clog the upper Klamath River should be seen not simply through an environmental and economic lens but also a social justice one, according to Craig Tucker, a natural resources consultant for the Karuk Tribe.

“These dams, in some ways, are like monuments to colonialism,” Tucker said, drawing comparisons to Confederate statues in the south. “They’re really not useful but they sure do establish who’s in charge, right? This is not just about the environment and corporate responsibility; it’s this thing with monuments and symbols as tools of oppression.”

The hopes of seeing those dams removed, hopes that burned so bright four years ago when hundreds gathered in Requa near the river’s mouth to announce a new removal agreement, have dimmed considerably since a July 16 ruling by the Federal Energy Regulatory Corporation. The ruling left the dam’s owner, PacifiCorp, threatening to walk away from the agreements and all other parties scrambling to keep them at the table. And late last week, North Coast Congressman Jared Huffman announced that the Water, Oceans and Wildlife Congressional Subcommittee he chairs will hold an emergency forum tomorrow examining the dams’ impacts on tribes, fisheries, the environment and downstream stakeholders.

“The event will focus on four aging dams on the Klamath River owned by PacifiCorp and Warren Buffet’s Berkshire Hathaway, which have made millions for PacifiCorp’s shareholders, but to the detriment of Native communities and cultures, and those who depend on the river’s fish,” reads a press release announcing the forum.

To be sure, the dam removal agreements have always been a delicate balance forged from the simple truth that the federal government had promised more Klamath water than it could possibly deliver. The accords were only reached after a decade of contentious litigation when a group of diverse stakeholders all agreed to give up some of what they felt entitled to in exchange for a more secure future and a desire to honor the humanity and needs of those sitting across the bargaining table. For ranchers and farmers near the river’s headwaters, that meant agreeing to shrink their footprints and make do with less water in exchange for a more stable supply. For the Karuk and Yurok tribes near the river’s mouth and the Klamath Tribes in Oregon, it meant agreeing to give up stake to some water in exchange for a cleaner, healthier river and, in the Klamath Tribes’ case, an expanded reservation. For PacifiCorp, the agreement represented a chance to walk away — to give up the dams, which don’t produce much electricity anyway, without having to accept the liability or price tag for their coming down. Environmental groups let go of the perfect (full water flows on an unencumbered river) in exchange for the good (removal’s opening up some 400 miles of additional salmon and steelhead spawning habitat while also improving water quality).

The initial removal agreements — reached in 2008 and 2010 — were dependent on an act of Congress that would have provided $400 million for fisheries restoration and absolved PacifiCorp of any liability. But Congress failed to act on the legislation and the deals expired in 2016, sending the parties back to the negotiating table.

A few months later, they reached a new, slimmer accord that omitted some of the pricey restoration work included in the first and used a third-party — the freshly formed nonprofit Klamath River Renewal Corporation — that would take over the dams’ federal licenses, absolving PacifiCorp of liability and potential cost overruns. The nonprofit would then use the $450 million already raised — $200 million from charges to PacifiCorp ratepayers and $250 million from a California water bond — to oversee dam removal.

But that plan hit a considerable snag with FERC’s July 16 ruling, which essentially OKed the bulk of the deal but did not allow PacifiCorp to hand over the licenses and walk away but instead required it to continue on as a “co-licensee” of the dams.

PacifiCorp spokesperson Bob Gravely said FERC’s decision essentially “undercut” some of the main “customer protections” it had negotiated in the agreement. While Gravely said the company is hopeful the parties could come up with another solution to revive the agreements, he said it is also prepared to move forward with trying to get the dams relicensed. (It’s worth noting that while this was previously viewed as hugely cost prohibitive, as the company would have to install fish ladders and make other improvements to increase water quality on the river, a court decision in a lawsuit brought by the Hoopa Valley Tribe has brought that into question, as the court found that California and Oregon had in essence waived portions of their authority over the relicensing process.)

Asked whether there were other things that could be brought to the table — indemnification agreements or large insurance policies — that could make PacifiCorp comfortable moving forward, Gravely said he’s hopeful something along those lines could stem from a meet and confer process with parties to the agreements over the coming weeks.

“I don’t know if we’ll ever get comfortable being a co-licensee but are there ways to move forward and end up at the same result?” he asked. “The parties are talking and those conversations are underway.”

But it’s clear many worry the company doesn’t have the same sense of urgency as other parties to the agreement. While the tribes and environmental groups watch the river grow sicker as time passes, with dismal salmon counts, PacifiCorp can continue operating the dam in some a kind of regulatory limbo, pushing off making any improvements. Meanwhile, with each passing year, the costs of dam removal increase.

“Since time immemorial, the Indigenous peoples of the Klamath Basin have stewarded the Klamath River, the second-largest river in California and once the third-biggest salmon producing river on the West Coast,” Newsom wrote. “It served as a centerpiece of community, culture and sustenance. Then beginning 100 years ago, construction of dams threatened this way of life, devastated salmon runs and altered the characteristics of the river itself. A century later, the river is sick and the Klamath Basin tribes are suffering.

“We stand at an unprecedented moment of reckoning about our past and, more importantly, our future,” Newsom continued. “In this moment, we have the opportunity and obligation to see ourselves clearly and decide whether we are living up to the values that I firmly believe all Californians stand for: equity, inclusion and accountability.”

In response, PacifiCorp President and CEO Stefan Bird soberly reminded Newsom that FERC’s ruling is a game changer for the company.

“While FERC’s ruling contemplates a path forward for dam removal, it does so at the expense of the amended (Klamath Hydroelectric Settlement Agreement’s) customer protection framework,” Bird wrote, adding that while FERC’s order and the standing agreement cannot be “easily reconciled,” the parties involved have a “proven record of resilience, commitment and close collaboration.”

Meanwhile, biologists watching the lower Klamath River are growing worried. In addition to the toxic algal blooms beginning upriver, they say the drought year has left the river low and warm.

“Water quality and water quantity conditions on the Klamath are, well, I would characterize them as terrible for fish,” said Barry McCovey Jr., a senior fisheries biologist for the Yurok Tribe.

McCovey, who’s also a tribal member, said the few fish currently in the river sit stacked near creeks and other tributaries that pump cooler water into the river’s main stem. But the fish crowding together like that makes them more susceptible to increased stress and disease outbreaks.

Usually, McCovey said, fall run salmon begin returning to the river in the last week of August or the first week in September, but that’s dependent on water temperatures and improved conditions. Last year, he said, their return “never really materialized,” making a fifth consecutive year of poor fish returns — including 2017, when conditions were so bad tribal members weren’t even allowed to catch salmon for subsistence.

“We would never have been able to predict what happened last year based on years of data and forecasts,” he said, adding that biologists predicted some 100,000 fish would return to the river but only saw a fraction of that and those that did return were smaller than usual, hinting at problematic conditions out in the ocean in addition to what’s happening in the river. “That’s terrifying to someone like me because I’ve dedicated my adult life and career to fixing the river so we can restore and enhance these fish runs.”

In a joint op-ed for the Oregonian, Karuk Tribal Chair Russell “Buster” Attebery and Yurok Tribal Chair Joseph James stressed that the health of the river and its fish are integral to the very essence and survival of their people, who for millennia inhabited dozens of villages along its banks.

“For us, dam removal is absolutely necessary to restore our struggling fisheries, maintain cultural practices and provide tribal members who struggle to make ends meet access to traditional subsistence foods,” they wrote.

Having worked with the tribes on local dam removal efforts for almost two decades now, Tucker knows that’s true. But he also isn’t convinced it — or Newsom’s heart-string tugging plea — is the best approach to getting Buffet and PacifiCorp to change course. Yes, he said, FERC’s decision does potentially leave the door open to some liability — whatever the Klamath nonprofit’s contingency fund, a massive insurance policy and bonded contractors can’t cover — but Buffet’s Berkshire Hathaway — a company that has more than $100 billion in cash on hand — is “an empire built on insurance.”

“The idea that they can’t figure out how to manage what I think is an infinitesimally small amount of residual liability just doesn’t make sense to us,” Tucker said, adding that he feels the parties need to make clear that a scrapped agreement will result in years of costly litigation and a very contentious, expensive relicensing process for PacifiCorp.

“We don’t need Warren Buffet’s sympathy and we don’t need his charity,” Tucker said. “We need him to make a good business decision.”

Huffman’s committee’s forum begins at 2 p.m. tomorrow and will feature comments from Huffman and North Coast state representatives, as well as a panel with a variety of subject matter experts. Tune on KEET-TV or through Huffman’s YouTube channel here.