A Company at a Crossroads: Huffman’s Klamath forum wraps with sharp questioning of power company executive 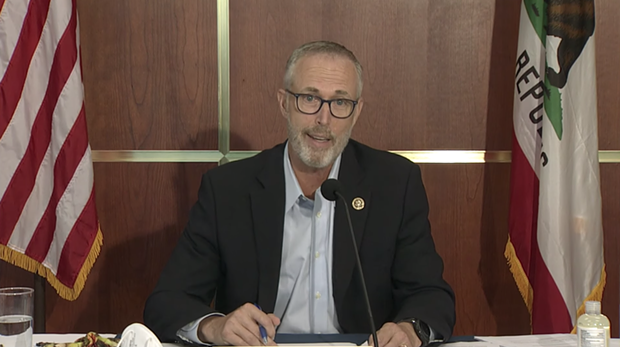 North Coast Congressmember Jared Huffman hosted a forum of the Water, Oceans and Wildlife Subcommittee he chairs this afternoon, orchestrating a two-hour panel discussion focused on the stalled agreement to remove four hydroelectric dams from the ailing Klamath River.

The forum began with heartfelt testimony from the Karuk and Yurok tribal chairs and ended with lawmakers grilling a representative of PacifiCorp, the Berkshire Hathaway-owned power company that owns and operates the dams on the upper river.

A host of stakeholders — including local tribes, PacifiCorp and the states of Oregon and California — reached a historic agreement in 2016 that charted a path forward on dam removal, reviving a hard-fought accord reached in 2008 and 2010 that sought the same goal but required Congressional approval and died on vine when it didn’t come. The 2016 agreement held that a new nonprofit, the Klamath River Renewal Corporation, would form to take over the dams’ licenses from PacifiCorp and then — using $250 million raised through a California water bond and another $200 million from surcharges to PacifiCorp customers — would oversee the delicensing and removal of the JC Boyle, Copco 1, Copco 2 and Iron Gate dams that currently clog the river, degrading water quality and cordoning off hundreds of miles of fish spawning grounds.

But the deal hit a snag last month, when on July 16 the Federal Energy Regulatory Commission approved the partial transfer of the dams’ licenses to the nonprofit but required that PacifiCorp stay on as a co-licensee. PacifiCorp has maintained that the ability to walk away from the dams unencumbered — with no potential to be on the hook for potential cost overruns or liability — was crucial to its agreement. FERC’s decision, the company said, means the agreement needs to be renegotiated, which would pose a potentially lengthy delay other parties say will further imperil fish populations and drive up costs.

After brief introductions from Huffman and a handful of other lawmakers, including North Coast Assemblymember Jim Wood and state Sen. Mike McGuire, the floor was turned over to Yurok Tribal Chair Joseph James and and Karuk Tribal Chair Russell “Buster” Attebery.

James said we all come to this forum — and this decision about the future of the Klamath River — amid a difficult national conversation about how to reconcile past injustices. And it’s important for people to understand, he said, that there is no separating the Yurok people from the Klamath River salmon, which have provided the bedrock of their diet and sustenance since time immemorial. He likened the decades-long degradation of the Klamath River, which has decimated salmon populations, to an attempted genocide similar to the 1860 massacre of Wiyot people on Tuluwat Island in Humboldt Bay. 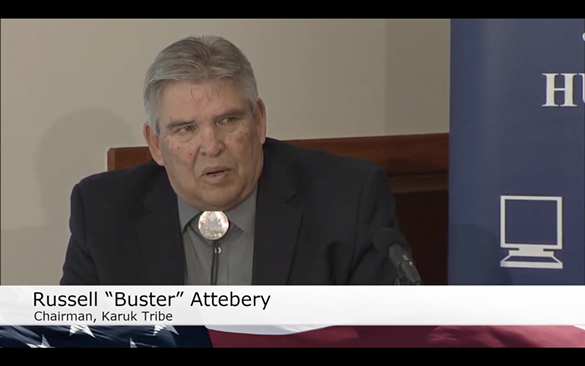 Attebery also spoke of the importance of salmon to his people, recalling the old adage that if you give a kid a fish, he’ll eat for a day but if you teach him to fish, you’ll feed him for a lifetime.

“That’s the way I grew up upon the Klamath River,” he said, noting that his grandparents and parents also grew up along the river. “For me, it was a part of becoming a man when I went out and I fished and brought fish home to be on the dinner table and I received thanks from my mom and dad. The kids nowadays don’t get to experience that feeling.”

The decline of the fisheries has had devastating impacts on both tribes, Attebery and James said, noting that both have had to repeatedly cancel commercial fishing seasons — the economic lifeblood of swaths of their communities. Even sustenance fishing — for generations a dietary staple — has been sharply curtained and even canceled outright in 2017 amid dismal salmon returns.

Attebery noted that an anthropologist once referred to the Karuk people as among the wealthiest in all of Northern America, noting they had abundant resources and no one ever fell hungry. That’s no longer true, he said, connecting the decline in salmon runs to spikes in unemployment, substance abuse, heart disease, diabetes and obesity.

“I have first-hand seen the decline,” he said.

Huffman then tapped another panel to help quantify the impacts the four hydroelectric dams have on water quality. 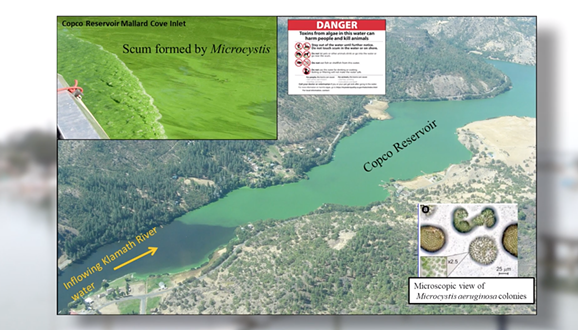 Glen Spain, the Northwest regional director of the Pacific Coast Federation of Fishermen’s Associations, said he represents small family-owned fishing businesses up and down the coast. Salmon fishing used to be their economic backbone, he said, with the Klamath River providing one of the largest runs in the region. But that’s not the case anymore, he said, noting that runs are less than 15 percent of what they used to be, with Coho runs down to just 1 or 2 percent of their historic highs.

Jacob Kann, a scientist with Aquatic Ecosystem Sciences, LLC, testified that toxic blue green algae buildups behind the Copco and Iron Gate dams are undoubtedly a direct result of the dams, which he said trap nutrients and create the warm, stagnant conditions perfect for algal blooms. Kann said the algae is toxic, posing risks of liver damage and drinking water contamination, as well as posing health risks to wildlife and domestic animals.

The final panelist on the science side, Jerri Bartholomew, a professor of microbiology at Oregon State University, testified that the dams’ stagnate flows increase water temperatures, lending fertile ground for the spread of various pathogens, from gill rot to the parasite Ceratonova Shasta, which affects the guts of juvenile fish.

“(The dams) altered the balance between salmonids and their pathogens,” Bartholomew said. “This leads to more frequent disease outbreaks which continue to contribute to the decline of salmon in this ecosystem.”

All three experts on the scientific panel agreed dam removal would restore the river to health.

Lawmakers then got the chance to question Scott Bolton, a senior vice president at Pacific Power, a division of PacifiCorps, which is owned by Warren Buffett’s Berkshire Hathaway.

Bolton said that while he and the company respect other stakeholders in this dam removal conversation, the company’s interest “transcends politics and division” and asks simply “what’s in the best interest of the customers we serve,” explaining that it is bound to protect its ratepayers. And Bolton said that’s what the company wanted out of the Klamath agreements — a deal that allowed it to walk away from its aging hydroelectric dams without paying for the upgrades needed to relicense them, the cost to remove them or any potential liability if something should go wrong. FERC’s decision, he said, “puts us in a very different position.”

While questioning Bolton, both Huffman and McGuire pledged that if the dam removal agreement falls apart they would do all they could to oppose the temporary, annual rubber-stamp license renewals PacifiCorp has received while negotiating a settlement agreement and push for the company to come into full compliance with environmental protection laws. Questioning California State Water Resources Control Board Chair Joaquin Esquivel, Huffman even asked directly if, with PacifiCorp having gotten “a free pass” on its various water quality impacts for years now, the state would have a “strong interest in making sure this does not continue to happen” should the company come looking for a permit.

At one point, Huffman noted that in testimony before Congress, Buffett once said he asked his managers to consider two things when making important decisions on behalf of his companies: whether they’d be comfortable with that decision being on the front page of the newspaper and that while he can be “understanding” of decisions that lose money, he cannot of any that “lose a shred” of his company's reputation. Huffman then asked Bolton if he and PacifiCorp were living up to those standards.

“I think that keeping our customers’ best interest, being able to be clear, transparent and accountable to our regulators and our stakeholders is very consistent with Mr. Buffett’s guidance and, frankly, the core values that his companies live and breathe by,” Bolton said. “Those values brought us to the settlement agreement.” 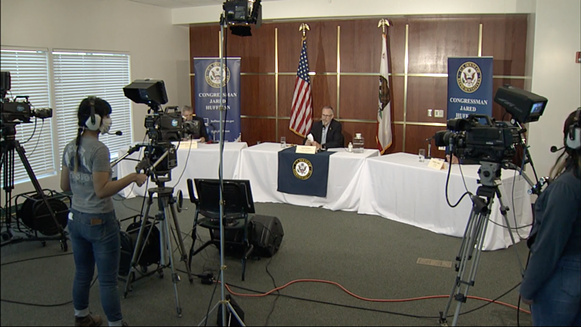 Bolton maintained that while PacifiCorp still wants “the terms of the settlement agreement,” the company needs to renew its economic assessments and decide what’s in its ratepayers’ best interests. Pressed, he said this process could take six months and may “widen the circle of stakeholders,” noting the company has ratepayers in six states.

But while PacifiCorp risks nothing in the delay — it’s making money off the power generated by the dams, isn’t bound to bring them into compliance with current environmental laws and currently isn’t on the hook for any cost increases to dam removal — other stakeholders can’t say the same. Every year that passes with the status quo poses grave risks for salmon populations while also driving up dam removal costs.

“This massive curveball may not be a curveball at all — it might just be a technicality,” Huffman said, adding that while the current agreement has more than $50 million set aside for cost overruns those could be quickly depleted with a lengthy delay. “If there’s a delay, those protections cease to exist. It puts us in a very difficult situation where you may be creating the very cost overruns you cite to get you out of the deal.”

As the forum drew to a close, Huffman said he plans to introduce federal legislation “in the days ahead” but stopped short of saying what it would do. But he made clear he believes dam removal will ultimately be the only viable path forward for PacifiCorp, whether under the terms of this agreement or some other mechanism.

“Mr. Bolton, I think it’s pretty clear that you and PacifiCorp are at a crossroads,” he said. “You have a choice. The river is dying. The fishery is dying. Your dam is causing a toxic concentration of algae that’s the worst in the world. … But you’re not powerless to protect your ratepayers. We can work shoulder to shoulder, get this done on time and on budget, or you can blow this thing up.”

The comment struck back to something Huffman said in his opening statement, laying the Klamath River’s future squarely at Buffett’s feet.

“Warren Buffett has the chance to be a hero in Indian country,” he said. “Or he has the potential to be remembered as someone who perpetuated a grave injustice just to make a little more money.”