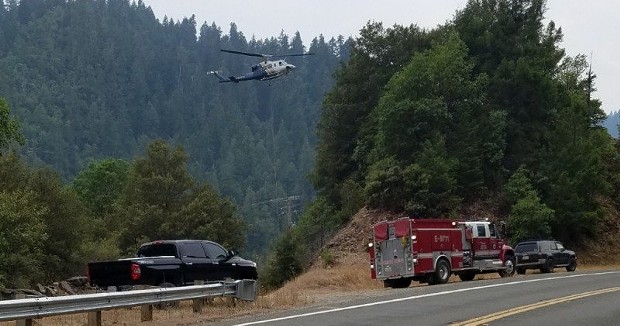 Multiple agencies responded to what was described over the scanner as a fatal traffic incident several miles south of Orleans on State Route 96 about 2:30 p.m. today.

A dispatcher sent first responders to what was first reported to be a motorcycle over the edge with a fire burning near the accident scene. Later, a report on the CHP Traffic Information Page, clarified there was a possible van about 200 feet over the edge in the water leaking oil.

Many of the forestry firefighters rappelled over the edge down to the fire taking a hose with them to squelch the flames. But when that wasn’t enough, a helicopter was brought in and made several dumps onto the fire in order to dampen it down enough so the ground crew could finish it off.

The road wasn’t closed but first firefighters and later Caltrans workers were in place slowing traffic, according to a resident of the area who provided the photos above and below.

According to the resident, the place where the vehicle went over the edge was through a gate on a dirt road right next to the highway. The resident said there were a number of different agencies at the scene, including three CHP vehicles, three Humboldt County Sheriff’s vehicles, one US Fish and Wildlife law enforcement, Hoopa Ambulance, several forestry and Orleans fire vehicles as well as one Yurok Tribal Police vehicle.