August 25, 2020
1 comment
Yesterday, the recently formed Committee on Racial Equity, "an organized group of BIPOC Theatre students and alumni from the past 10 years," shared a list of issues and demands addressed to the faculty of the Humboldt State University Theatre Program. It bears the signatures of 73 students, alumni and guest artists. 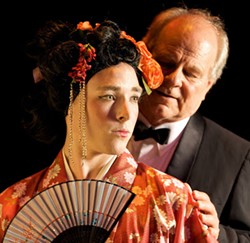 The letter outlines problems with pay equity for guest artists of color, casting, representation and racist comments, such as referring to BIPOC students as "thugs." Among CORE's demands, the letter calls for a stakeholder meeting, a public apology, training, changes in syllabi and selection of shows for the season. It also asks for review of the department's hiring process and that half the faculty, now all white, be BIPOC. (See the full letter copied below, along with HSU's response.)

Roman Sanchez, who graduated HSU's theater program in 2018, said he and his peers saw the critiques of professional theaters raised by We See You White American Theater, as well as those levied at college and university programs, and found they echoed issues at HSU. “We realized we had a lot of stories to tell
and a lot of trauma that had not been healed," says Sanchez. "We also had a lot of love for the HSU theater program.”

After talking with BIPOC alumni, former students and guest artists from the last decade (though he declines to say how many), Sanchez says, “What was scary was that it was the same things happening [over 10 years] … the same stories, same anecdotes, same failure to recognize and apologize” for what they agreed was a lack of sensitivity and cultural understanding.

Given the five vacancies in the department, Sanchez says, “We felt an urgency of getting this letter out now.” It's CORE's hope that its letter will have some influence over the hiring of new faculty and that its wide distribution — to alumni, media, local and national theater organizations, as well as University of California and California State University faculty — will add some pressure. “We hope that establishes some urgency to take action now and not treat it as it has been over 10 years.”

In an email response from HSU spokesperson Grant Scott-Goforth, the university stated that it would "look closely" at the details and requests in the letter, and reasserted its commitment to diversity and inclusion.

"We certainly condemn any racist actions by individuals or groups associated with HSU, and are focused on addressing any institutional racism." (Read the full response below.)

From the Committee on Racial Equity:

A CALL TO ACTION: WE DEMAND YOU COMMIT TO RADICAL CHANGE.

The past months have been enveloped in a pandemic killing disproportionate amounts of BIPOC, more innocent Black people being murdered, and more white supremacist systems making it evident they want BIPOC to struggle, starve, and die. Over the past decade, Humboldt State University’s Theatre Program has caused a plethora of harm and trauma, evidenced by narcissistic behavior, to such an extent that we demand the program commit to change.

We are an organized group of BIPOC Theatre students and alumni from the past 10 years (and beyond) who stand with our white peer allies, including former staff, faculty, and guest artists. We write to you to hold accountable the exclusively white leadership, faculty, and staff that have perpetuated over a decade of harm.

We do this for:

Some selected anecdotes from the past decade that articulate the aforementioned behaviors include:

1) Hold A Meeting With All Stakeholders

a) Acknowledge and apologize for the decade-long mistreatment of BIPOC stories, students, and guest artists. In this apology, take a meaningful stand that Black Lives Matter and acknowledge that the Program and its venues exist on the Wiyot people’s land. Within the apology, there should be a commitment to do better. This apology should be sent to local media, as a response to this email, and be posted on Program social media.

a) Build a line item into your budget to create a Theatre Student Union on Race and Equity or a Theatre Student Advisory Board. Provide them the resources to make sure the Theatre Program does not continue its current history.

a) Solicit funding to create scholarships, funding opportunities, and/or grants for current and new BIPOC students for their tuition, living expenses, and student projects.

a) Refer to David Valdes’ essay on HowlRound, Beyond ‘Decolonizing’ The Syllabus.
Page 3 of 5

a) Create a plan of action and/or strategic plan to educate yourselves and all stakeholders involved with Theatre students. Make this plan available as a Public Record. Hire consultants to engage in topics including, but not limited to, cultural competency, anti- racism, decolonizing the classroom, implicit bias, and color-conscious casting. Invest yourself, your resources, and the Program’s resources in this process and do so whole- heartedly.

a) Create and publicize a more streamlined, transparent, and safe process for students to report and record behavior from peers, faculty, staff, etc.

a) The Program is funded almost entirely by student tuition and Associated Student (A.S.) funding — use the Theatre Student Union / Advisory Board to help prioritize funding to BIPOC initiatives.

a) All promotional materials, including but not limited to, brochures, bookmarks, website pages, and fliers that include [tokenized] pictures of BIPOC students in productions and classes should pay students for the use of their image on marketing materials.

*Some of the Founding Members of C.O.R.E.

The University learned of this today, and we haven’t been able to thoroughly examine the details and requests contained in the group’s press release. But we take these matters very seriously and will look at it closely.

We certainly condemn any racist actions by individuals or groups associated with HSU, and are focused on addressing any institutional racism.

We are fully committed to the mission, vision, and values of Humboldt State. You can read our full statement here, but the ones below are particularly relevant to this conversation:

· We will be renowned for social and environmental responsibility and action.

· We believe the key to our common future will be the individual citizen who acts in good conscience and engages in informed action.

· We will commit to increasing our diversity of people and perspectives.

· We will be exemplary partners with our communities, including tribal nations.

· We believe in the dignity of all individuals, in fair and equitable treatment, and in equal opportunity. We value the richness and interplay of differences. We value the inclusiveness of diversity, and we respect alternative paradigms of thought.

· We believe individuals must be environmentally, economically and socially responsible in the quest for viable and sustainable communities.

In recent months, many campus groups have shared messages of solidarity with communities of color and our commitment to address inequities, reduce harm, and enact positive social change. Please feel free to read those messages, which are collected here. https://president.humboldt.edu/message-solidarity


Editor's note: This story has been updated to clarify Grant Scott-Goforth's position with the university.