During the COVID Crisis, Southern Humboldt Dealt Another Bitter Blow as Only Pharmacy for 40 Miles Closes Tomorrow 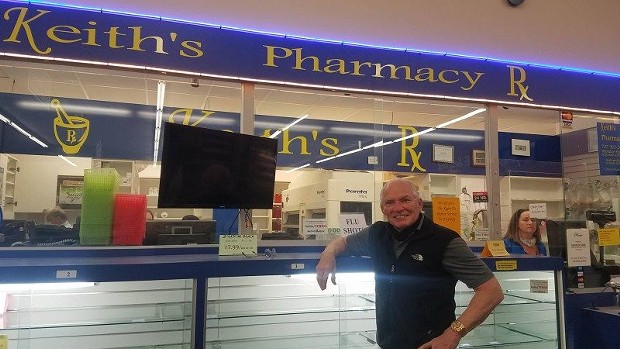 The Southern Humboldt Community, already reeling from a struggling economy due to the change in the cannabis industry and the current COVID crisis, now takes another blow as their only local pharmacy will close abruptly tomorrow which will create travel times of an hour or more one way to the nearest pharmacy and require more travel during a pandemic that requires people to travel as little as possible.

Late yesterday, some medical facilities received word of the closure. This morning, word of the imminent disaster spread on social media of the issue.

Our attempts to reach Keith’s Pharmacy resulted in a phone being slammed down as soon as we asked a question about the closing, but Lauren Schmitt from KMUD got an interview and graciously shared it and the photo above with us.

The owner, Keith Lorang, told her that the reason he was closing is the business wasn’t making a profit. He said, “No matter how much we did, we were losing money.” He said that recent changes in insurance policies made it impossible for him to turn a profit. He added, “It is time for me to do something else.”

Lorang said that the business would close for good at 6 p.m. tomorrow and that customers could get their prescriptions sent elsewhere if they contacted him by then. But, getting prescriptions might be difficult as the pharmacy was selling out of their stock.

In the future, he told KMUD, “[Patients] are going to have to go to Fortuna to get [prescriptions filled…There’s [also] a delivery they can get through Redwood’s Rural.” He pointed out that the elderly and rural patients would lose services though. He explained, “We were the only ones that delivered [prescriptions] to your doorstep…and we’ve mailed them out.”

Lorang acknowledged that the community hadn’t received much notice. “I didn’t notify myself until Tuesday,” he said wryly. He said that a local insurance company was withholding about $20,000 from him. “They said I broke the rules in giving people their prescriptions,” he told KMUD. “Without [the money] I don’t have enough to pay my people.”

Lorang said he told himself, “To heck with this. I’m tired of fighting with the insurance companies all the time.” He said, “I have someone working on it to get my money.” But he is going to look for another occupation. “I will have to get into a different line of work,” he said. “At this point in time I think I’d rather be a used car salesman than a pharmacist.”

We spoke to the Humboldt County Sheriff’s Department and they confirmed that the owner, Keith Lorang, has “a civil bench warrant for failure to appear in court,” according to Samantha Karges, the department’s spokesperson. She told us, “It is a cite and release warrant, so he would typically be contacted by law enforcement and given a new court date.”

We have been told but cannot yet confirm that the warrant is in relation to a law suit brought against the pharmacy.

According to Bob Davila, Public Spokesperson for the California State Board of Pharmacy, Lorang was disciplined previously for an undisclosed reason or reasons and was put on probation but has since moved through to clear the license. “He was on probation but completed his probation,” Davila explained.

However, Davila pointed out that Lorang’s license is set to expire August 31, 2020.

“This is devastating that there has been no notice given to the community,” explained Clover Willison, a Southern Humboldt insurance agent who has clients who use the pharmacy. “We have cancer patients or people with diabetes that are very reliant on getting medication when they need it. When they have no notice that their pharmacy is no longer in business, there is a lag time between having a doctor’s office provide a new prescription and possibly obtaining authorization from an insurance company.”

Patients who have prescriptions through Keith’s Pharmacy should transfer them to their best alternative now, she explained. “People should get in there today as early as possible and transfer prescriptions to other pharmacies now,” she told us.

She also explained that patients can make arrangements with one of the local clinics and have prescriptions delivered or they can choose to travel north to Fortuna or Eureka–about 40-60 miles one way depending on where they start.

Willison pointed out that not having a local pharmacy especially impacts those whose finances are non-existent and those whose may have issues that make traveling difficult. “When we are talking about a transient population and some with severe mental health issues and relying on those medications to stabilize them, [not having a pharmacy close by] is a problem,” she told us.

Local medical services are scrambling to cope with the unexpected crisis.

Joe Whitney, office manager and board member of Heart of the Redwoods Hospice said that he learned about the issue on social media. He went to the grocery store where the pharmacy is located and got the drastic situation confirmed by a clerk. “[The loss of the pharmacy] will affect our clients,” he worried. “We sometimes need to order end of life medications to ease the clients passing,” he said. “Family members will no longer be able to pick them up in town.”

He pointed out that one of the two pharmacies from up north that do deliveries to Southern Humboldt a couple days a week doesn’t deliver a critical end of life care medication. “One of the commonly used medications is morphine and at least one of the pharmacies won’t deliver morphine and the other only delivers to Redwoods Rural [in Redway,]” He explained, “When clients are at the end of life, this just creates another hurdle for the family and the caregivers to have to go through at a critical time.”

He reassured the community though that Hospice will be working to ease the problem. “We will continue to try and help in any way we can when a client is facing end of life,” he said. “We will try to get comfort care medications in place as soon as possible.”

Whitney noted another concern for the greater community though. He said, “One of nurse’s mentioned this morning that when someone leaves the emergency room now, they just can’t pick [medication] up on their way home.”

Matt Rees, CEO of Southern Humboldt Community Hospital District where the emergency room is located, said that the staff has come up with a solution to this issue. He explained the hospital will be getting more medications to have on hand so that if someone needs a prescription the hospital can “give a two or three days supply” and then the hospital can have the medications delivered from pharmacies up north.

Still, he worries about patients. “We might get extra patients into our emergency room because they won’t have the medications they need,” he explained. “So we are looking at stocking up.”

He said that during the COVID crisis the hospital has been already making sure local seniors have assistance. “We can also do home deliveries,” he said. “Say there’s an elderly patient that has chronic health issues that would put them more at risk in the time of COVID. We already have it that they can pick up medications” or have them delivered.

According to Terri Klemetson, Redwoods Rural Health Center’s Facilities Manager, “If any of our patients are in distress, we will do our best to make the transition in a safe way so contact us.” She said that they also get deliveries of medications. “We work with multiple pharmacies and it is really important to us that they still have the services they need locally,” she said.

The closure of Keith’s Pharmacy is part of a broader trend. Small pharmacies are closing their doors in high numbers. According to a policy brief published in 2018 by the RUPRI Center for Rural Health Policy Analysis at the University of Iowa, “Over the last 16 years, 1,231 independently owned rural pharmacies (16.1 percent) in the United States have closed. The most drastic decline occurred between 2007 and 2009. This decline has continued through 2018, although at a slower rate.”

The brief noted that pharmacies are “an essential cornerstone in the delivery of health services to rural communities. In rural areas, pharmacies not only provide access to medications but also deliver clinical services such as medication counseling, blood pressure and glucose monitoring, immunizations, patient consultation, treatment of mild illnesses amenable to over-the-counter medications, and other counselling and educational services (including
chronic disease and medication therapy management).”

The most immediate concern for locals is that if people have their prescriptions with Keith’s Pharmacy, they need to get the prescriptions moved to another one by tomorrow at 6 p.m.