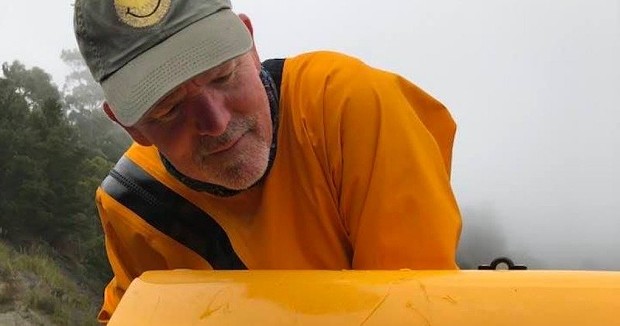 Yesterday afternoon, a shark chomped onto the end of a kayak in Shelter Cove and threw the kayaker into the water where they were eye to eye. But, fortunately, the kayaker lived to tell us the story of his terrifying experience.

David Alexander, Superintendent at Bellevue Union School District in Southern Santa Rosa, said with the fires and the stresses of the recent time, he knew he needed a break.

He decided to go to fishing at Shelter Cove but didn’t have a partner. “You never go alone,” he said. So he reached out through an online group and found a partner. “I don’t even know his last name. His handle is Three money J. His real name is John. I met him for the first time at Shelter Cove.”

They launched about 6:30 in the morning and had a good day of fishing and wildlife encounters.

“Earlier in the day I saw the most interesting whale,” Alexander said. “It came straight at me and he goes right under my boat.” Alexander said he was worried about accidentally hooking the whale but luckily did not.

Then, he said, “About a half hour later, he comes back and cuts right in front of my boat….Typically I like seeing whales…but that was close.”

The two kayakers were through for the day and heading in, Alexander said. “We were heading south and…rounding the lighthouse…I heard a thud…It felt like the front of my boat was lifting up …I heard a sound sort of sandpaperish…a grinding sound. For a second I thought I was being lifted up onto a wash rock…I saw gray and then I said, ‘That’s not a rock. That’s a shark!’

What Alexander saw then keeps replaying in his head. He saw the shark chomp down on either side of the tip of his vessel.

“He had the front of my kayak literally in his mouth…It was like he was smoking it like a cigar…It was surreal.”

“He had the front of my kayak literally in his mouth…It was like he was smoking it like a cigar…It was surreal.” tweet this
Simultaneous to seeing the shark, Alexander was being thrown from the kayak. “I hear the thud.. feel the push and I’m rolling to the right,” he said. With his gear and his glasses falling into the water with him, he went under then bobbed up.

“I was probably about 4 feet from the shark,” he told us. “I’m in the water…I don’t know if he is looking at me, but I’m looking at him….When he hit the boat, I fell off on the same side his face…I could see both eyes–one side more than the other…His eyes are so dark…I could see his teeth and his gums. You see those rows of teeth…that’s something else.”

He paused, ”I wonder how many times that is going to play in my head.” He said he asked himself, “What do you do when he let’s go?”

Alexander said he really thought the shark would let go of the boat and then come after him.


“He is facing me, he has to swim towards me,” Alexander said. He mentally prepared himself for the worst. “I thought he was going to let go and then go after me,” he said. I thought…I’ve had a good life. I hope it doesn’t hurt too much.” But, the shark didn’t come towards him. “He kinda loosened his jaw from where his teeth were embedded in the kayak,” Alexander explained. “He turned on a dime.
He almost went 180 degrees from the direction of where he was at. Then he headed toward John.”

Alexander said he was worried that his kayaking partner would be attacked. Then there was a splash and the shark disappeared beneath the water. “I heard [John] on the radio,” he said. “He asked if I was okay. I said, ‘I’m not bit or anything.’ And John spoke over the radio telling whomever he was talking to, ‘He is okay and he is alright.’ But a bunch of boats came over quick, which was really cool.”

Alexander got himself out of the water and back into his kayak. “I did a self-rescue,” he explained. “[If you kayak,] practice your self-rescue. When it happens under stress in rough water, it’s different than in a pool…When you are dangling on the side, it’s hard to be calm.”

It took three tries to right his boat and he thinks he smacked himself in the process. “I think when I was flipping it back over it came and smacked me a couple of times,” he told us. “I think I broke my hand.” 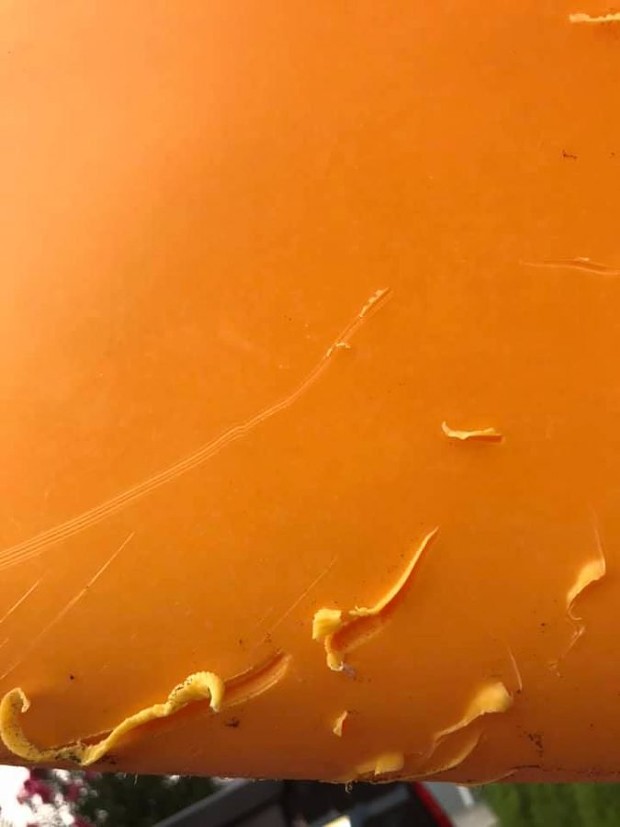 Then, once in the kayak, he discovered that the shark had bitten so deeply it was leaking, but he had a bilge pump still attached and was able to follow his partner to shore while pumping out the water.

He wanted to be sure to clarify the situation for readers. “I wasn’t dragging fish,” he said. “I don’t bleed fish unless it is salmon, But I didn’t have any.”

He thinks the shark was “a little Great White.” He said that he believed the creature was only 13-15 feet long.

Alexander said that he’s glad he was prepared. “I was wearing a dry suit,” he explained. “I wear a personal flotation device. I had a bilge pump…That little bilge pump is a life saver.”

He also was glad his partner had the VHS radio. And Alexander said he was glad he had a partner to help him navigate the situation. “He kept his cool,” Alexander said. “You got to go out with people, you don’t go out by yourself.”

After he got safely to land, he could see how the shark’s teeth had sliced through the walls of his yellow kayak “like butter.” He said he told everyone, “Life’s good…I guess I’m ready to go home.” And, when he got to his house, he said he just kept petting his dog over and over.


“I lost my prescription glasses,” he said. “I lost my rod and reel…I guess I need a new kayak…but it’s only stuff.” But then he added, “All I can think about right now is his mouth on my boat." He repeated again in an awestruck tone, “It was like he was smoking it like a cigar…you can see teeth marks on both side… It’s kind of surreal.”