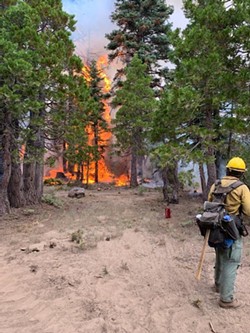 This morning's update on the Red Salmon Complex states that the fires are now at 23,221 acres and 42 percent containment.  The Red Salmon Complex is comprised of the Red and Salmon fires, started by a July 27 lightning storm, burning in rugged and remote country within the Trinity Alps Wilderness on the Six Rivers National Forest.

"Yesterday, crews successfully closed the gap at High Point Ridge, connecting the north and south firing operations along the crest; firefighters will continue to strengthen that line today," the update reads.

The update also states that aviation resources are available to support firefighters as fire behavior becomes active throughout the day.

For more, read the full update below:

Current Situation: Yesterday, crews successfully closed the gap at High Point Ridge, connecting the north and south firing operations along the crest; firefighters will continue to strengthen that line today. Interior fire in the drainage below the Ridge became active and did spot over the line. Crews were able to pick those spots up and will continue to mop them up. Crews also deployed hose line at the northern portion of Devil’s Backbone to facilitate firing operations from the north to the south, which will continue today as conditions allow. The southeast portion of the fire within the containment area continues to move south across the slopes and there is the potential for increased fire behavior and significant spotting. Crews are continuing structure protection assessment in the McNeal Creek and Forks of Salmon area. Aviation resources are available to support firefighters as fire behavior becomes active throughout the day.

Red Fire: Crews are maintaining the footprint of the Red Cap section in the northwest area of the fire, crews will continue to monitor, patrol and mop-up hot spots. The strategic firing operation along High Point Ridge has been completed and crews will continue to hold the line. Spotting over High Point Ridge occurred last night. All spot fires have been contained and will continue to be monitored and mopped up, and should pose no threat. The fire progression to the south will continue to be held along the indirect fire line on the ridgeline from Saddle Gap to Onemile Creek and from Eightmile Creek to Onemile Creek using strategic firing operations. From Soldier Trail up Devil’s Backbone ,crews are cutting indirect line, eventually meeting up with crews from the northern end of Devils Backbone working their way south. Contingency lines on Hopkins Ridge continue to be improved.

Salmon Fire: This fire remains within its current footprint. Islands of vegetation inside this area, will continue to burn. These are not threatening containment lines.

The Red and Salmon Fires are burning on the Klamath, Six Rivers, and Shasta-Trinity National Forests. Great Basin Incident Management Team 5 is continuing to work closely with the Hoopa Valley Tribe, the Yurok Tribe and Karuk Tribe and local community liaisons.

Weather: Hot and dry weather will continue through today, which could increase fire activity. Temperatures will be in the mid to high 90’s in the lower elevations and in the high 80’s to low 90’s in the higher altitudes. Winds are expected at two to four mph, picking up this evening, with gusts up to 15 mph. A red flag warning is in place northwest of the fire until approximately 5:00 pm on Monday, with winds moving northeast, but is expected to have no impact on the Red Salmon Complex.

Air Quality: Smoke will continue to be produced as islands of unburned vegetation are consumed within fire control lines; other fires within the state are adding to local & current smoke amounts. Refer to fires.airfire.org/outlooks/NWCalifornia

Photos/Videos: Photos and videos of the incident are posted on Inciweb. inciweb.nwcg.gov/incident/6891 Closures: The Red Salmon Fire Forest Closure became effective on August 8, 2020. As hunting seasons open, hunters are reminded the closure is in place for their safety as well as the safety of firefighters. The full Forest Closure Order can be found on Inciweb. inciweb.nwcg.gov/incident/6891.